The KFC couple address divorce rumours: “We will not be shaken” 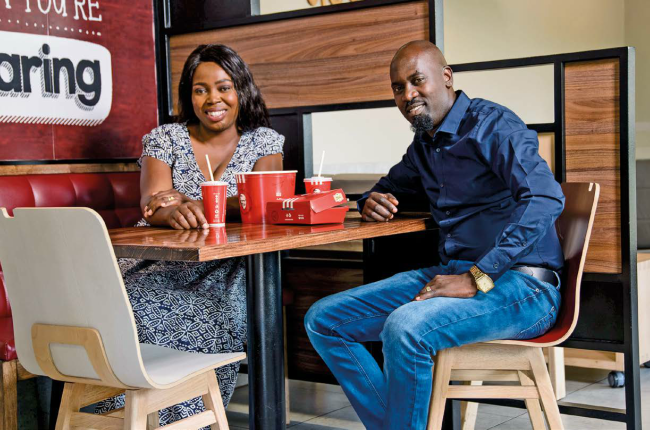 The country fell in love with their love story when the couple were spotted getting engaged at a KFC.

Soon everyone rallied around to give them the wedding of their dreams. Designer clothes, fancy cars and venues, holidays and drinks were sent their way.  Then the rumours started to surface– the beloved KFC couple were getting a divorce, people said on social media.

“We will not be shaken,” Hector says.  “When God is about to bless you, there are bad things that will first come up. When these things come up, I’ve learnt to say, ‘thank you God here are steps for me to climb up’.”

It’s not the first time they’ve had to deal with such rumours since they got married, they say.

“I wish I knew who was behind all of this and understand what the motivation behind it is,” he says.

Their story warmed South Africa’s heart when a Twitter user ridiculed their proposal.

The attempted ridicule worked in their favour as Mzansi pledged to help them have the wedding of their dreams.

“It was a dream fulfilled by God,” he says.

They got their dream wedding which was even aired on Moja Love, DStv channel 157.

They are still head over heels in love, they tell us.

“Since then, my wife treats me like a president. I thought it would end after some time but the love keeps growing, we love what we are and so do people. We know what love is, we do not pretend. We really love each other. Wherever we are, we talk about each other.”

We live in a world where facts and fiction get blurred
In times of uncertainty you need journalism you can trust. For 14 free days, you can have access to a world of in-depth analyses, investigative journalism, top opinions and a range of features. Journalism strengthens democracy. Invest in the future today. Thereafter you will be billed R75 per month. You can cancel anytime and if you cancel within 14 days you won't be billed.
Subscribe to News24
Related Links
UK bride feels unstoppable after planning her whole wedding despite losing her eyesight
Local bride who was left at the altar on why he never showed up and why she still married him later
Weddings, funerals and other life events that have gone online since Covid-19
Next on Drum
Enyobeni tavern owner appears in court