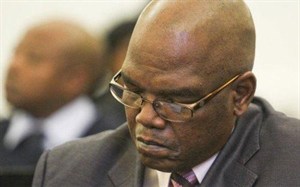 "Shots went off and my husband went to look through the window," Mary Lokaje told the Boksburg Magistrate's Court, where the inquest into Oupa Ramogibe's death is being held.

"My husband had a better view of the shooting, and when the other gunshots went off he said they are killing someone else's child."

She told the inquest that four police officers -- three in uniform and one without -- fled the scene shortly afterwards. Two went into a tuckshop and two got into a vehicle that drove off.

Ramogibe was killed near her house. His body was found next to the wall of the house.

Ike Motloung, for Mdluli, asked Lokaje why her husband has not made a statement, as he was in a better position to tell the inquest what happened.

Lokaje said that on two occasions that the police visited her home, her husband was not there. The police did not return, as they had promised to do. Lokaje made her statement only in 2011. Ramogibe was killed in February 1999.

The charges against them were intimidation, kidnapping, assault with intent to do grievous bodily harm, murder, attempted murder, and conspiracy to commit murder.

Lokaje told the inquest that one bullet hit her house.

Motloung asked her how sure she was that the fourth man was also a police officer.

Motloung suggested that she could not be sure whether it was the same officers or different ones who came back.

Lokaje replied: "Based on the fact that at that point in time they were the only police officers around, I thought they had to be the same."

We live in a world where facts and fiction get blurred
In times of uncertainty you need journalism you can trust. For 14 free days, you can have access to a world of in-depth analyses, investigative journalism, top opinions and a range of features. Journalism strengthens democracy. Invest in the future today. Thereafter you will be billed R75 per month. You can cancel anytime and if you cancel within 14 days you won't be billed.
Subscribe to News24
Next on Drum
Monkeypox has officially reached South Africa - here's everything you need to know about the virus