Chainsaw attack triathlete: 'I'm not angry or bitter but I remember it as if it were yesterday' 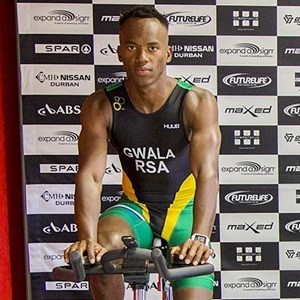 Eighteen months ago, he almost lost a leg in a horrific chainsaw attack – now triathlete Mhlengi Gwala is back in the saddle and competing again.

Just a year ago he wondered if he’d ever be able to use his legs again and now he is walking, albeit with a bit of a limp. It’s nothing short of a miracle that he’s able to – last year attackers cut into his leg with a chainsaw while he was out cycling near the University of KwaZulu-Natal.

READ: 'I don't know why they would do something like that to me' – chainsaw attack triathlete speaks to News24

The assault was devastating. Not only was his career as a triathlete at risk, there was a real possibility of losing one of his legs, which was cut to the bone. Today Gwala is showing that he’s a survivor. His right leg was saved thanks to an operation and the 28-year-old is back on his feet and smiling broadly as he arrives at the beachside restaurant in Durban where we meet.

He’s brought along his fiancée, Hlengiwe Mokoena, 27, their daughters, Esihle, 6, and Elihle, 3, and his nephew, Ndalo, 7.

The two men who attacked Gwala that early March morning haven’t been brought to book, but he holds no grudges, he told DRUM. "I’m at peace with everything that happened to me. I don’t know why it happened to me, but I know God knows."

'I remember it as if it were yesterday'

The man of faith has forgiven his attackers, but he’ll never forget what they did to him. "It’s pointless being angry or bitter because I can’t undo the damage that was done – but I’d be lying if I say the incident is wiped from my mind. "I remember it as if it were yesterday."

He’s seeing a psychologist to help him deal with the trauma he suffered that day but there are lingering emotional scars in addition to the physical ones. "I still have days where I feel weak." Yet that hasn’t stopped the triathlete from getting back in the saddle. Nine months after the horrific assault, Mhlengi cycled from Johannesburg to Durban.

In February he tackled the 2019 Discovery Triathlon World Cup in Cape Town and in May he’s heading to Italy for a para-cycling competition. He's determined not to let the attack define him.

"This incident didn’t break me – it forced me to grow emotionally and mentally," he says. Gwala credits those closest to him for helping him pull through the toughest time of his life. "My family is there whenever I need them, especially my mother and my fiancée." He’s been dating the mother of his children for 10 years, but they’ve become closer over the past year.

"It made me appreciate life," says Mhlengi, who proposed to Hlengiwe in the wake of the attack. "I knew how important it was to spend time with family and my loved ones."

Before the attack, Hlengiwe had lived with her family at Endwendwe, and regularly visited their daughters, who lived with their dad in Chesterville, Durban. "After the incident he asked me to move in with his family because he wanted to spend more time with us," she says. "I think we suddenly realised the importance of raising children under one roof. It’s bittersweet because it took something so tragic to bring us this close."

Hlengiwe has been by his side every day after the horror attack. "At no stage did I think of leaving him. I knew he’s a strong person and I knew that’s when he needed me most," she says. "I stayed and supported him because I love him. We have children together and they need us both."

READ MORE: Chainsaw attack: 'They couldn't get through his bone' - training partner, friend of SA triathlete

Gwala had always known Hlengiwe was the one, but her unwavering support helped him realise he didn’t want to live another day without her, so he started lobola negotiations in October.

"My parents demanded six cows from him," Hlengiwe says. "We’re hoping to get married within two years. Our dream is to have a big traditional wedding and have a big house where we can raise our children."

When he walks down the aisle to marry the woman of his dreams, Gwala plans to do so without the limp he now has. "According to my doctor, my full recovery should take two years, and I have no doubt I’ll recover thanks to the amazing team of doctors who treat me," he says. His faith is unwavering. "I’ll be fully recovered in 2020."

Gwala spent three weeks at St Augustine’s Hospital in Durban after surgeons operated to save his leg. Were it not for the support of fellow South Africans, who raised around R700 000 through crowdfunding, Gwala wouldn’t have been able to afford the surgery that’s helped him get his life back on track.

The money is being used for his medical bills and treatment, which includes going for physiotherapy twice a week. "I’m truly grateful to everyone who donated towards my treatment costs. "I am also thankful to everyone who gave me psychological and emotional support. It meant a lot."

In September he returned to work as a lifeguard at Westville swimming pool, where he’s been put on light duty. "Right now, my focus is on getting back into shape and building and strengthening my muscles. I wake up in the early hours and I still use the same route to go to gym. The only difference is I now have a car, which makes things easier," he says.

Gwala is trying to move on from the past but he can’t shake off the feeling his attackers had targeted him specifically. They’d jumped out of the bushes and dragged him back in and when disturbed by the lights of a nearby car they took off. "I might not know the motive behind it, but I get the feeling my attack was well planned," he says.

"None of my belongings were taken and [it felt like] the attackers wanted to make sure I never compete again. I know they’re probably out there, maybe attacking other people, but I have faith their day will come."

"The matter is still under investigation," she says.

As for Themba Gumede, the security guard who came to Gwala's rescue when he crawled out of the bush a bloody mess, the athlete says they’ve become blood brothers.

"Themba is more than a friend to me, he’s become one of our key family members. We phone each other just to update each other. I thank God for bringing him into my life."

We live in a world where facts and fiction get blurred
In times of uncertainty you need journalism you can trust. For only R75 per month, you have access to a world of in-depth analyses, investigative journalism, top opinions and a range of features. Journalism strengthens democracy. Invest in the future today.
Subscribe to News24
Related Links
Durban chainsaw attack survivor on his recovery: " This incident didn’t break me"
Chainsaw attack: 'I started walking without crutches', says triathlete Mhlengi Gwala
Long road to recovery ahead for SA triathlete after chainsaw attack
Next on Drum
School principal who forced a child into a pit toilet to look for a cellphone has been fired