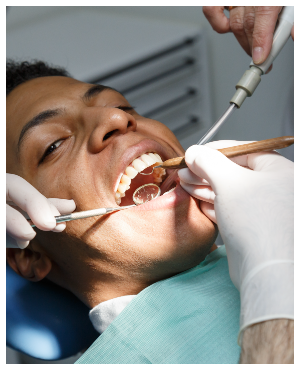 A 26-year-old man had his mouth cut open when he allegedly went for a tooth-extraction procedure recently.

Ntokozo Mchunu from Durban tells DRUM that he had terrible toothache since August and decided to see a dentist.

“I went to Poly Clinic in KwaMashu twice for help, but I was sent back because they didn’t have anaesthetic injection to numb the area where the tooth was to be removed. I was in so much pain, I would cry like a baby every night,” he explained.

When he couldn’t take the pain anymore, Ntokozo decided to visit a private doctor, Dr MS Moola, based in KwaMashu.

“I went there on 16 October and I paid R190 for pain medication and I was told to come back after five days. He said there was a boil underneath the affected tooth.”

However, when he returned on 22 October, Ntokozo got more than he bargained for. In fact, he wishes he never went back to remove the tooth that gave him sleepless nights.

“I’ve never been in so much pain in my life. I felt everything that was happening in my mouth. His hand was inside my mouth and I could feel the forceps grinding my tooth in pieces,” he said.

Ntokozo claims when the dentist was done, he was given a mirror to see his mouth, which was in tatters. “I was shocked to see my mother in that state. It didn’t look like my mouth. I couldn’t believe it.”

He claims when he asked the dentist about this, Dr Moola allegedly blamed Ntokozo’s mouth. “He said my mouth was too small that’s why the procedure didn’t go well.”

Ntokozo, who survives on piece jobs, says he was told to pay R300 to have his mouth stitched up. “I was sent to another doctor who stitched me up, but I am no longer the same. I couldn’t eat for weeks and survived on liquids like juice and porridge.”

He reveals that because of the way his mouth now looks, his confidence has taken a knock as well,.

“I don’t feel like I am normal. I am still in pain, this doctor ruined my life. I will never be the same again.”

Speaking to Drum Dr Moola confirms that Ntokozo’s mouth got cut during the procedure. “It wasn’t intentional, his mouth was too small that’s why it got cut while trying to root out his tooth.” He says he did not make him pay for the mistake to be fixed.

“That’s not true. I covered the cost to have another doctor stitch him up. But he can come back to the surgery to examine the damage,” Dr Moola says.