Malema: We will shut down Parliament 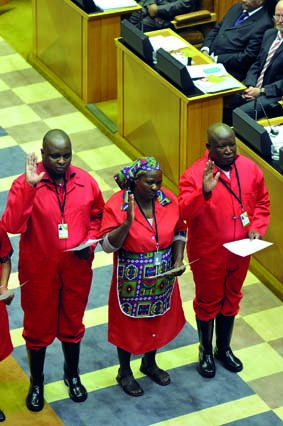 EFF leader Julius Malema on Friday night called on National Assembly Speaker Baleka Mbete not to push the party to shut down Parliament.

"One thing Baleka Mbete does not realise is that if all opposition walk out, they will have to collapse the Parliament," he told party members in Boksburg, on the East Rand, during a women's month event.

"They must not push us to that level because we will go and have elections again."

He was reacting to Mbete's threat to suspend Economic Freedom Fighters MPs from Parliament following their heckling of President Jacob Zuma in Parliament last Thursday.

EFF MPs disrupted questions to Zuma in the National Assembly by chanting "pay back the money" and then refusing to leave the House when Mbete ordered them out.

Malema said opposition parties on Friday showed unity when they put their differences aside and refused to select a chairperson for the Nkandla ad hoc committee. They first wanted the committee's mandate reworked to expressly include Public Protector Thuli Madonsela's findings on the R246 million spent on security at Zuma's Nkandla, KwaZulu-Natal, homestead.

Malema said suspension would not silence the party. They would use the time to launch more branches.

"Jacob Zuma must know that the time for laughing in Parliament is over. He must give the right answers or what happened will continue. Suspend us and when we come back, we will start from where we left off," Malema said.

Mbete has written to each of the 25 EFF MPs individually to give reasons why they should not be barred from the legislature for up to two weeks for disrupting presidential question time.

Malema earlier on Friday threatened to take the matter to court should Mbete not withdraw her plans to suspend his MPs by noon on Sunday.

He blamed the African National Congress for the formation of his party. If the ruling party thought the EFF was a problem, it had created the problem, he said.

Malema said his organisation was making MPs think twice when they had to account to Parliament.