PE teenager loses kidney after bully attack: "This has left him with physical and emotional scars" 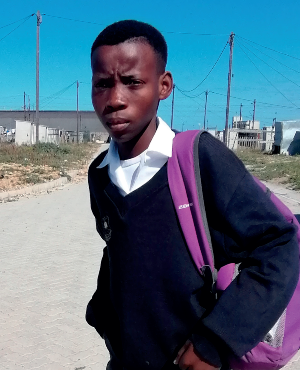 Every morning he stands in front of his house watching other learners on their way to school. Envious, he grabs his own bag to join them. But his aunt and her husband have to rush out and bring him back home. He feels like a prisoner behind the wall of his Qaqawuli, Port Elizabeth home, Yanga Shongwe (16) tells Move!.

A few months ago he would have joined the throngs of pupils heading to Thubelihle High School but now he can’t go anywhere. His life changed after he lost his left kidney and part of his liver following an incident of bullying at school in April this year. Since then, his life’s been in limbo.

THE DAY HIS LIFE CHANGED

Yanga was with a friend playing with rocks during breaktime at school when the incident happened. “Suddenly a boy came to me and beat me up. I fell down and he jumped on the left side of my stomach while I was on the floor.

Other boys stopped him and took me to the secretary’s office. I was dizzy. The school called an ambulance, but it took too long. Other learners carried me to a nearby clinic. At Tshangana Clinic I was also told to lie on the floor as my left side of my stomach kept on swelling. After that, I don’t know what happened,” he says.

His aunt, Nomonde Makhubalo (46) met him at the clinic, where she found him on the floor and in pain. “The nurses said they were waiting for an ambulance. Luckily, it arrived and he was admitted to Livingstone Hospital. The X-rays showed that part of his liver was damaged and had to be removed. After five days he was released. But doctors said he can’t go back to school until he’s properly healed or he could get an infection. He can’t even play soccer,” she says.

Read more: How to deal with an anxious child

He has been out of school for most of the year. “Every day, Yanga wants to know when he can go back to school. He wakes up every morning and watches his schoolmates. On two occasions he went without telling us. But he was turned back by teachers saying he must come back when he is healed. I can see he’s hurt,” she says.

The family has demanded action from the school following the incident. “But the school said they can’t force him [the alleged bully] to come back to school. They claimed that since the incident the boy hasn’t been back at school because he was scared.

Read more: 4 ways you can best prepare your child for ‘big school’

“We also visited his home with the New Brighton Police. But his grandmother said he is no longer living with her. His parents had taken him. She refused to give the cops his new residential address,” Nomonde says. According to the boy’s grandmother, her grandson is now living with his parents in Jeffreys Bay. “His parents panicked after the incident and requested that he stay with them,” she tells Move!.

Nomonde says what baffles her most is that the other boy had been wearing hard safety shoes at school, which is why Yanga ended up with a damaged liver. They’ve been in contact with the other boy’s mother. “She said she bought him those shoes because he wore through his shoes quickly. She didn’t take any responsibility for her son’s actions. She didn’t even help with bus fare as we are solely dependent on Yanga’s foster care grant,” she says.

While the family was trying to demand justice for him, Yanga experienced other complications. “Since his liver surgery, Yanga became very sick. He lost his appetite. When I took him for check-ups at Port Elizabeth Provincial Hospital, he could no longer walk the long distance. He complained of pains on his left side. I told the doctors and they then discovered that his left kidney was damaged. It was removed on 4 October,” Nomonde says.

Yanga is an orphan who lost both his parents to illness and his aunt, her husband and son are his only support. “I spend most of my time watching TV and playing games on my cell phone. I was a soccer player, but doctors say I can’t play anymore. It was my dream to become a lawyer. But I can’t achieve that without education,” he says sadly.

Nomonde’s husband, Mazizi Makhubalo, tells us that Yanga’s so hurt that they can’t listen to Rebecca Malope’s songs anymore as they make him cry. “Before this incident he was a happy boy. This has left him with physical and emotional scars. Being at home every day is killing him.”

The Eastern Cape Department of Education spokesman, Malibongwe Mtima, confirmed the incident and says they engaged both sets of parents about it.

“According to the school principal, he found Yanga lying on the floor. Yanga told him that he was kicked by another boy. He was taken to the clinic. He was left at the clinic with his aunt while the mother of the other boy didn’t to come to school, citing work commitments.”

The grandmother alleged that Yanga’s family threatened to burn down her home. Since then he never came back to school. His guardian distanced herself, claiming that she was only the grandmother.

“We called the boy’s biological mother in the presence of Yanga’s aunt. They agreed to meet but they failed to solve it. “We realised there was no resolution when police visited the school looking for the boy as Yanga’s parents were pressing charges. The boy’s parents laid counter charges,” he says.

“When a case involves minors, we don’t normally open a case because they are kids. We only act once the education department instructs us to after completing its disciplinary action processes,” police spokesperson Captain Andre Beetge explains.

WHAT THE LAW SAYS

According to legal insurance company, Law for All’s advocate Jackie Nagtegaal, bullying (including physical, verbal, social and cyber bullying) is not considered a crime in South Africa.

However, a child’s rights are still safeguarded. The South African Schools Act states that all public schools must enforce a code of conduct. It should contain a set of rules regarding learner behaviour as well as specific procedures to deal with cases of bullying, including consequences.

The act also gives every South African child or their guardian the right to bring a case of bullying to court. In some cases, a school can be held liable for damage, injury or loss suffered by a learner. For example, if a school was aware of the learner’s difficulties with bullies but failed to intervene.

The Protection from Harassment Act states that a learner can apply for a protection order against an assailant, while the Child Justice Act states that in the case of children older than 10, a bully can be arrested, detained and attend a preliminary hearing in court.