Pretoria woman who won R70m Powerball prize on how her life changed: “It took a while for it to sink in” 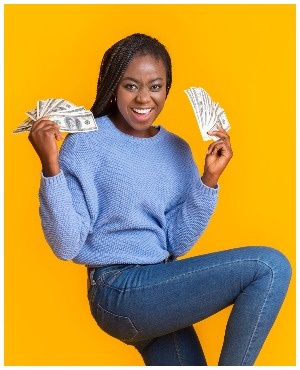 She whispered a quiet prayer as she had done every time she’d bought a Lotto ticket over the past 19 years, paid for it and hoped for the best. Nhlanhla (54) could barely afford the R7,50 ticket. Even though it was the beginning of September and she’d been paid her salary just a few days ago, she had just R300 to her name.

Like so many South Africans she was up to her neck in debt and sinking fast. “God, please bless these numbers,” she murmured. Against all odds, her prayers were answered with a tsunami’s worth of blessings – but Nhlanhla still can’t quite believe she’s South Africa’s newest multimillionaire.

Overnight she went from having a few hundred rand to her name to a staggering R70,8 million. It’s a reversal of fortune so phenomenal it’s almost impossible for her to fathom. Just a few short weeks ago she was a struggling single mother working at a laundromat, battling to make ends meet and living in a mud house with her brother, sister, daughter and grandchild in a Pretoria township. Now the possibilities for her and her family are limitless.

“It took a while for it to sink in,” Nhlanhla tells us of the moment she realised she was the winner of the Powerball Plus jackpot. “Even though the winning numbers were right in front of me, I wasn’t 100% sure it was real.” But it was. And her days of poverty ended in a heartbeat.

Nhlanhla was consumed with worry before her bank account almost burst at the seams. When she bought the ticket that would change her life, half of her monthly R4 000 salary had already been swallowed by debit orders for the R40 000 she owed in loans, and she’d spent most of the balance on groceries and electricity.

“I didn’t know what I was going to do. I was stressing that I was going to have to survive the month by borrowing money from people,” she says, chatting to us at the Sandton office of national lottery operator Ithuba where she’s accompanied by her sister, daughter and grandchild.

Her dad passed away in 1998 and her mom in 2003. She doesn’t have many relatives to lean on for financial support. “One of my brothers also passed away and no one from my dad’s immediate family is still alive.

“There are a few relatives on my mother’s side, but five years can pass without us seeing each other.” Her back was against the wall when she bought that Lotto ticket, and everything was riding on the numbers she’d picked. They weren’t random though, she says. Her choice was strategic, a mix of numbers she’d played in previous years and numbers she noticed were often drawn. Some of the numbers were selected based on the popular township betting system Fafi, where numbers are linked to images from players’ dreams.

“Before I went to bed, I put the ticket in between the pages of my Bible and then I prayed,” Nhlanhla says. “I said ‘Because you are God, there’s nothing I can hide before your eyes. You know these numbers. I know what I’m doing is gambling and that it’s wrong in your eyes, but please give me just a little help to sort out my financial issues’.”

She woke up at 3am and went down on her knees to pray again. During her lunch break the next day she saw the Lotto results at a grocery shop. “I wanted to win the daily Lotto, I wasn’t too concerned about Powerball,” she says. Powerball was introduced to South Africans in 2009, giving players another chance of seeing their dreams come true. In 2015 Powerball Plus was added.

For an additional R2,50, punters have the option of playing Powerball and Powerball Plus every time they buy a Lotto ticket. “When I checked the daily Lotto results, the only number I had right was 14. My heart sank. Then I checked Powerball to console myself and I saw that four of my chosen numbers were drawn in the Powerball Plus.” She told her boss she’d come close to the Powerball numbers and her boss compared her ticket with the results.

And that’s when Nhlanhla was told the incredible news: she had all the numbers. The most she’d won before was R900. So, it was hard to come to terms with the fact she’d won over R70m. She went to the petrol station where she’d bought the ticket “and as soon as the cashier inserted my ticket into the machine, she was full of excitement”. “She told me to write my name and ID number on the back of the winning receipt and said my prize was too big for them to pay out.”

The following day she went to the Ithuba offices to claim her millions – and her new reality began. Her first splurge was on a new wardrobe and a smartphone, but what this brand-new multimillionaire really wants is a bigger house for her family.

She plans to buy a five-bedroom home in Pretoria for her siblings as well as a four-bedroom home for herself, her daughter and grandchild and she wants to transform her current home too. “We live in a five-roomed mud house. Before my parents died, they started building another house on the property, but they didn’t get around to finishing it.

“I was working on completing the house, but I didn’t have enough money to finish it so now that’s my first priority. We’re going to break down the structure and start afresh on a double-storey house,” she says.

But what’s a millionaire without a few four-wheeled toys to play with? Nhlanhla is working on getting her driver’s license so she can complete her dream by buying two sets of wheels – she’s thinking maybe a Mercedes-Benz or BMW and a Ford Ranger.

She also wants to give her daughter, who’s 27, a second chance at completing her education. She dropped out of school after her first year of tertiary studies due to financial difficulties, but her mother’s fortune could make her the first person in the family to obtain a tertiary qualification. Unsurprisingly, Nhlanhla has quit her job at the laundromat and wants to invest her money carefully.

She also plans to start a trucking company to make her millions stretch further. “God heard my cries,” she says. “I’d always pray and ask God to bless me and remove me from the pit I was in. The burden was becoming too heavy and He answered my prayer.”