SA troops not going to Lesotho 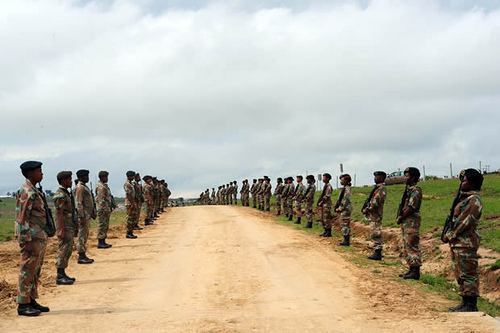 The South African government was not immediately sending troops to Lesotho following claims that the neighbouring country had been taken over by the military, the department of international relations (Dirco) said on Saturday.

Dirco spokesman Clayson Monyela said diplomacy should be given a chance and the situation should be resolved through peaceful means.

He was speaking at a media briefing held at Dirco's offices in Pretoria.

The Lesotho soldiers had reportedly taken over the police headquarters, radio and television stations resulting in a blackout in broadcast.

Monyela said government was concerned about the situation.

It called for the Lesotho defence force to restore order in the country.

"[We]... call on the commander of the Lesotho defence force to order the army to return to their barracks and allow the democratically elected government of the kingdom to carry on with its business," Monyela said.

"These activities of the Lesotho defence force have wrongly forced the constitutionally elected prime minister, the right honourable Dr Tom Thabane and the one of the leaders in the coalition government honourable Thesile Maseribane to go into hiding."

He would not confirm that Thabane had fled into South Africa.

No one had officially claimed taking over the Lesotho government.

Monyela said Southern African Development Community (SADC) was engaging with all the roleplayers.

He called for a dialogue to resolve the issues.

"Political problems need to be resolved through political channels which is actually dialogue," said Monyela.

He said all the South African officials in Lesotho were safe and accounted for.

However, Monyela urged people wishing to travel to Lesotho to "consider the situation."

"The SA government encourages the leaders of the coalition government to work together and implement the Namibia declaration which was presented at the recent Victoria falls SADC summit," said Monyela.

"In this regard, South Africa in her capacity as the chair of the SADC organ on politics, defence and security remain committed to assisting the leaders of the coalition government to find a lasting solution to their current challenges," he said.