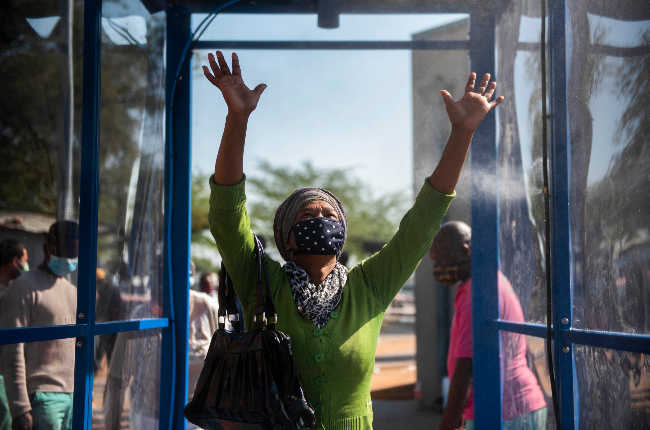 The fight against Covid-19 is far from over. With the economy slowly re-opening following a five-week national shutdown, businesses are required by law to protect their workers by making sure their places of work are safe and precautions to protect employees against Covid-19 are taken. This means ensuring hand sanitisers are available so that people can wash their hands regularly.

Public transport operators have also had to introduce safety measures.

City of Johannesburg was applauded for a pilot programme launched at Bara Taxi Rank on Monday – two sanitising booths were introduced and stationed at entry points for commuters to pass through. This is to help fight the spread of the virus which has, at the time of publishing, claimed 206 lives in South Africa and over 290 000 globally.

Speaking at the handover of the booths, mayor Geoff Makhubo said if the pilot programme works at Bara, it would work in every other taxi rank. “This is, after all, the biggest taxi rank so if this works here we know it will work even in other facilities,” he told the media.

But many raised concerns on how effective the project would be as people were seen avoiding the booths.

But Makhubo says the city has a plan.

“Part of the problem we have is that there is no fencing on the one side so people are not forced to walk through the booths. But we are thinking about further investments here. With the fencing we will have a more controlled entry/exit system like in the airports and train stations. Once the fencing happens we will also be able to bring more booths,” he said.

Medical scientist Veronica Mathebula believes this initiative will go a long way in the fight against the deadly disease, which spreads through droplets from infected people.

“It will not only help by doing the obvious, which is sanitising and potentially reducing the spread of the virus which is its main purpose. It will also help to conscientise communities. When people see the booths there it will be a reminder that we are at war with an invincible enemy and we constantly need to remember to take the necessary precautions,” she tells DRUM.

She added that just like handwashing, this could only work if everyone takes it upon themselves to make it work.“This may be the new norm. Even post lockdown we will still need to proceed with extra caution to make sure we do not see a rise in infections. Therefore, it is concerning to see people walk away from sanitising booths without sanitising.

“If you see a sanitising booth there and you choose to walk away from it, what message are you trying to send about yourself? That you don’t worry about possibly giving the virus to someone else? It’s important to emphasise that the only way we can win against this virus is if we each act like we have the virus and then treat the next person like they have it,” she said.