DRUM attended the launch and we bumped in to Aaron Moloisi who plays Will on Generation and also co-presents Shift, he seemed to be enjoying himself at the launch with friends and colleagues.

“I like SUV cars they comfortable, elegant and have power but most importantly they have space… it’s a mommy car,” he said while checking out the car. 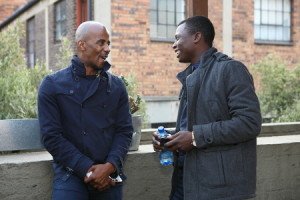 We also spotted Noluthando Meje simply known as Nolly who not so long joined the Isindingo cast as Zukiswa. We asked her how she feels about people loving her role, she says “It’s really humbling hey, I’m grateful for this opportunity and I’m loving the Isindingo family” and “I’m working on a few projects that I would rather not reveal for now but what I can say is that watch this space”. Moving on to cars and driving, Nolly says she still recalls when she got her driver’s license, “I was 25-years-old when I got my driver’s licenses but I failed my first test, I still remember” and “big cars are my thing, I love big cars”. Other celebrities who graced the occasion was Metro FM’s Siphokazi January, Musician Vusi Nova, Linda Moeketsi, Zuluboy and Lupi Ngcayisa just to mention but a few.