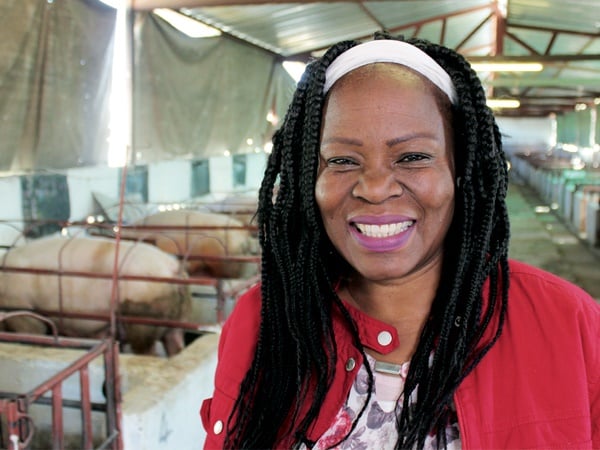 It’s never too late to start over and reach your dreams, and Priscilla Zodwa Thala can attest to that. The 47-year-old go-getter grew up with parents who did subsistence farming in Dennilton in Limpopo – she had big dreams and even more moxie to make a success of herself, but only realised farming was her passion later in life.

Zodwa put in the work and studied to become a nurse and a teacher – even doing her honours in psychology and later working as a nurse in the ICU at night, while teaching high school during the day. Despite her hard work, she still found herself frustrated with her low income and continued to do double duty for 12 years. “My aim was to raise funds to start a business in the future.”

Zodwa was 38 when she ventured into agriculture after resigning from nursing and teaching and used her pension to finance her business.

She did her research and found having a piggery would bring home the bacon, as they say – and the rest is history. Zodwa continued to further her education and did short courses in animal production and artificial insemination at the Tshwane University of Technology and the Agricultural Research Council respectively, as well as a three-month course at Dalein Piggery in Pretoria.

Today she has her own piggery, Prejonet Piggery Farm, where she also lives in Hammanskraal in Gauteng. The award-winning farmer was hailed with the best female entrepreneur award by the Gauteng department of agriculture and rural development (GDARD) for her achievements in 2017 and continues to inspire.

She decided to share her knowledge by starting a training centre, Prejonet Academy, to teach basic farming skills and financial management to graduate interns. Many people approached her, asking for information about starting a piggery, which lead to the new venture but it has since turned into another stream of income that helps fund the farm.

Zodwa’s piggery supplies 80 porkers and baconers a week, which she provides to Farmers Meat Market Sundra in Springs. She’s taken adversity and turned it into a successful career. “Being a female farmer is not easy. There are a lot of challenges.

“Remember, agriculture is a male’s stream, it’s a man’s world. So you have to push to get recognition,” Zodwa says.“I started with five sows and now I have 200. I’m proud of myself.”Zodwa has 10 permanent workers who assist on the farm, eight students on experiential training from different colleges and universities around the country and 10 students who are on a learnership programme. She aims to help more black farmers join the agricultural sector.There have been many challenges but mostly “lack of assistance from government”, Zodwa says. “You need to work hard and think outside the box.”Her daughter and son don’t seem to be interested in farming, Zodwa says, so “I’m worried about the family legacy, because I’m doing it all for them”.Zodwa proved it’s never too late to discover your true passion, so there’s still hope. Head to drum.co.za to learn more about Zodwa:
We live in a world where facts and fiction get blurred
In times of uncertainty you need journalism you can trust. For only R75 per month, you have access to a world of in-depth analyses, investigative journalism, top opinions and a range of features. Journalism strengthens democracy. Invest in the future today.
Subscribe to News24
Next on Drum
The power to defeat the coronavirus is in our hands