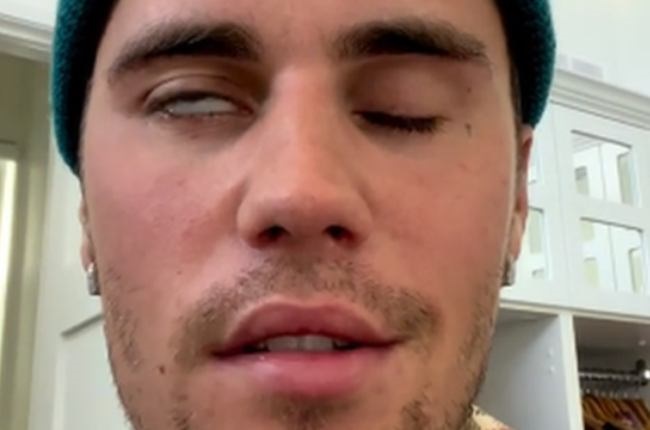 Justin Bieber is taking time out to recover after learning he had Ramsay Hunt Syndrome.
Instagram

Earlier this week, the Canadian-born singer Justin Bieber (28) announced that he had cancelled a number of his upcoming shows due to an illness.

“I wanted to update you guys on what’s been going on, obviously as you can probably see from my face, I have this syndrome called Ramsay Hunt Syndrome and it is from this virus that attacks the nerve in my ears and facial nerves and has caused my face to have paralysis. As you can see, my eye is not blinking, I can’t smile on this side of my face, this nostril will not move. There’s full paralysis on my face,” he said in the video.

“So, for those who are frustrated by my cancelations for the next shows. I am just physically not capable of doing them. This is pretty serious as you can see. I wish this wasn’t the case. But obviously, my body is telling me I gotta slow down and I hope you guys understand.”

He said he would be using this time to rest, recover and do facial exercises.

Read more l Kidnapped, beaten and robbed for being gay – ‘I thought they were going to kill us,’ says survivor

Justin’s revelation prompted anti-vaxxers to speculate that his illness was the result of getting the Covid-19 vaccination.

Some linked this to his wife, Hailey Bieber’s illness after she developed a blood clot that travelled to her brain, requiring her to have surgery in March.

Medical experts have since given a breakdown of what Ramsay Hunt Syndrome is and its causes.

According to a study by the National Library Of Medicine, Ramsay Hunt Syndrome also known as herpes zoster oticus, is a rare neurological disorder characterized by paralysis of the facial nerve. It is named after a physician who first described the disorder in 1907.

Although cases vary, common symptoms include hearing loss, tinnitus, difficulty in closing one eye, nausea, vomiting, pain in the ear, vertigo or the sensation of things spinning, weakness on one side of the face, and a change in your sense of taste. These can be very serious, especially relating to the eye as it cannot fully close in some cases, making the eye dry out and cause inflammation.

Exercise Medicine Physician and Consultant Sports Dr James O'Donovan recently gave a detailed explanation of the causes of Ramsay Hunt Syndrome on his channel on YouTube.

“Ramsay Hunt Syndrome is a condition caused by the same virus caused by chicken pox. This is called the varicella-zoster virus (VZV). After chickenpox clears up, the virus can still live in your nerves, and years later it can reactivate. When it reactivates it can affect your facial nerves," he says.

"The two main signs or symptoms are a painful red rash with fluid-filled blisters on, in, or possibly around one ear. You can get facial weakness or droop on the same side as the affected ear. Typically, the rash and the facial paralysis occur at the same time, but sometimes one can happen before the other, and other times the rash never occurs."

Compared with Bell's palsy, which causes sudden weakness in the muscle on one side of the face, Ramsay Hunt syndrome often causes more severe paralysis at the onset and a sufferer is less likely to recover completely.

Ramsay Hunt Syndrome can change the appearance of the face, change your sense of taste, and damage the eye, resulting in loss of vision. Nerves may grow back to the wrong structures and cause abnormal reactions and movements. Sometimes, it may spread to other nerves or the spinal cord or brain and cause, drowsiness, headaches, and nerve pain.

Treating Ramsay Hunt Syndrome can ease pain and decrease the risk of long-term complications, although some people may have permanent facial muscle weakness and hearing loss.

Usually, a healthcare provider will diagnose by looking for signs of weakness in the face and a blister-like rash.

They will recommend anti-inflammatory drugs (steroids), strong painkillers and antiviral medicines, such as acyclovir or valacyclovir, may be given. In some cases, they will give a patient an eye patch, if required, to prevent injury to the cornea if the eye does not close completely.

If there is not too much damage to the nerve, recovery should take weeks. If damage is severe, recovery may take several months or you may not fully recover. Children have been known to have more complete recovery more than adults.

"Early recognition and commencement of the steroids and antiviral therapy within the first 72 hours is thought to maximize the chance of a good recovery,” says Dr O'Donovan.

We live in a world where facts and fiction get blurred
In times of uncertainty you need journalism you can trust. For 14 free days, you can have access to a world of in-depth analyses, investigative journalism, top opinions and a range of features. Journalism strengthens democracy. Invest in the future today. Thereafter you will be billed R75 per month. You can cancel anytime and if you cancel within 14 days you won't be billed.
Subscribe to News24
Related Links
No need to panic, says expert after Pfizer Covid-19 docs unsealed, sending antivaxxers into a tizzy
What you need to know about getting a J&J booster shot if your first two jabs were Pfizer vaccines
Injection or pill? Phase 1 of oral Covid-19 vaccine study kicks off in South Africa
Next on Drum
Expert explains why in winter you shouldn't be using the same skincare products you used in summer