The former Our Perfect Wedding presenter used to take viewers on a journey to the altar every week, enthralling them with the hiccups the bride and groom must overcome to have their dream day. Now the former popular has found her perfect  partner  –  and just like a scene from a romantic movie, Nomsa Buthelezi reveals she met her bae on the set of the hit reality TV show.

Nomsa recently went public with her new relationship, and can’t be more open to discussing finding love with the woman who’s stolen her heart. The 34-year-old is like a schoolgirl in love as she holds hands with her partner, Zandile Shezi (30). During our photo shoot the couple whisper sweet nothings, giggle and smile constantly.

In August the TV darling came out when she posted a picture of her and Zandile, captioning the happy snap “My king is a woman”. But while most fans were shocked by the revelation, the Lockdown actress tells us it’s not her first lesbian relationship. “People close to me knew that uNomsa  uyi lesbian because I had been dating a girl for a long time.”

She was in a three-year relationship with a woman which ended at the beginning of 2018, and describes it as a time of finding her feet. This time, Nomsa says, she’s in love. She steals a glance at Zandile and says she didn’t expect to fall head over heels. “I never thought about it as I never look at people, I only look at money,” she jokes.

The actress and presenter had been shooting scenes for OPW in Mpumalanga in March 2018. After filming wrapped, she joined the guests as they continued to revel in the day’s festivities, and laid eyes on Zandile. Nomsa was instantly attracted to Zandile’s warm smile but kept her cool as they sat in a large group of people. The pair eventually struck up a conversation and ended up talking for two hours straight.

“We just sat and spoke, and it felt amazing,” recalls Zandile. The pair exchanged numbers and several months later they’re still on cloud nine. “I’m living in my truth,” Nomsa says.  “I’m in a good space, I’m very happy.” It’s taken her years to be comfortable in her own space but it’s something Nomsa needed to do.

“It’s very hot in the closet and it was difficult for me to come out but I came out because so many lesbians are being killed and raped,” she says.  “I felt if I stepped up and said I’m lesbian, other people would have the strength and courage to do the same.”

Most of her fans are happy she’s found love, but not everyone has reacted posttively. Social media users have accused the actress of coming out for publicity, but the negativity isn’t limited to faceless trolls, Nomsa reveals. “There was one actor who said to me, ‘Welcome to the illuminati, money will come to you now because you do the devil’s things’.”

Nomsa won’t expose the actor but says she wasn’t deterred by his comment as her sexuality “doesn’t make my talent”. “This is who I am. I didn’t do this for fame. My relationship with Zandile isn’t a brand, we’re building a family.” She isn’t the only one being shaded over her sexuality. Nomsa is pained her son Olwethu (14) and daughter Linda (12) are both being bullied.

“Sometimes I feel like I could go to school with them to protect them, but I have to leave them to experience this and learn to protect themselves,” she says. She’s always believed in having an open, honest relationship with her children and the kids have known about her sexuality long before she was ready to tell the world.

While Olwethu disapproved of her first relationship, Nomsa says both her children have taken to Zandile. “There was a day they went to Gold Reef City together. When my son came back he said, ‘I think she’s perfect for you.’” Nomsa agrees. “Zandile gets me. I can’t hide anything from her and I don’t have to explain myself to her.”

The couple are so in love they’ve introduced each other to their parents. Zandile’s parents, Nonthembeni (56) and Albert (50), had always suspected she was lesbian and are very “understanding”. Nomsa’s parents, Vezi (61) and Magdalene (60), also had their suspicions about their daughter’s sexuality and have welcomed Zandile into their family.

“It was very easy for me to come out because my parents were waiting,” says Nomsa, who calls herself a late bloomer. “All they cared about was me being in the right relationship with the right person.” Zandile is the perfect fit but we won’t be hearing any wedding bells soon. They’re leaving marriage in God’s hands, Nomsa says. “For now, we’re still learning about each other.”

Dating a high-profile celebrity has put the spotlight on her. Zandile is forthcoming when patients and colleagues point out they saw her on TV or read about her. “I don’t hide our relationship. If you ask me about it, I will answer.” She doesn’t find it difficult to date a celebrity because “Nomsa doesn’t see herself as one, nor does she act like she is. She’s down to earth, she’s a straight talker and I love that she’s so humble. I’ve always wanted someone who can tell it to me like it is and she’s that for me.”

The outspoken actress ended off 2018 on a professional high after the release of her new film, Super Mama, in which she’s the leading lady. Nomsa stars as an unconventional superhero who keeps the township streets safe – and has the audience in stitches – with her martial arts skills.

The actress has a lot more in store for fans. “Next year people must see uGomora Diva.” She rubs the tattoo of her nickname on her chest that’s an ode to Alexandra, where she grew up, then says, “I’m going to  do  the  things  that  make  the  pots  happen [meaning she’ll put in the work to  ensure  success]  and  I’m  not  going  to stop.” 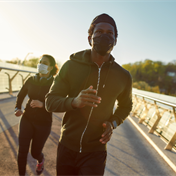