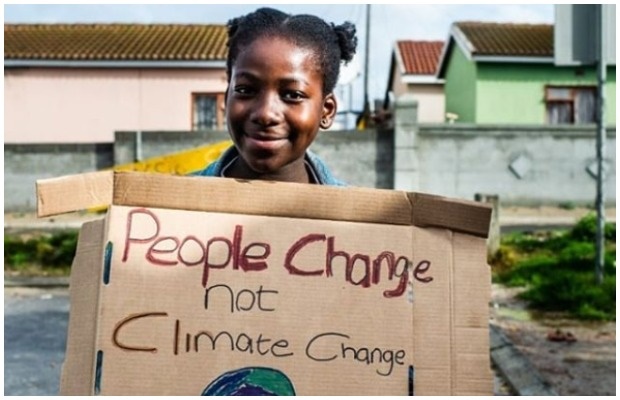 In the area where she lives, people don’t typically recycle or pay much thought to the impact waste has on the environment. In a township stricken with poverty, issues such as employment, proper housing and adequate water and sanitation facilities are far more pressing than the state of the planet. And quite rightfully so, many would argue.

But for one passionate preteen, teaching her community how to take care of their environment is at the top of her to-do list. Drive through some of the streets in Khayelitsha, a sprawling township in Cape Town, and you’re likely to see food wrappers, plastic bags and other waste materials strewn all over the sidewalks.

This is what Yola Mgogwana (11) wants to change. “People are poisoning the earth by littering. So, I’m teaching them to take care of the earth by not polluting the water and air and throwing rubbish on the streets.”

Her activism is much needed in a world where the effects of climate change on our planet continue to worsen. A recent report by the Intergovernmental Panel on Climate Change says our food security has already been affected by climate change because of global warming, changing rain patterns and the greater frequency of some extreme events like the recent European heatwave.

The prevalence of disasters such as food-supply instability, droughts and wildfires are only set to increase as the world warms – and we only have ourselves to blame. The special report, under the heading Climate Change and Land, states an ever-increasing population, advances in technology and poor land management practises are issues the world should pay close attention to if we hope to limit global warming to 1,5°C rather than 2°C. This is why Yola and her fellow climate change warriors are doing all they can to have their voices heard.

In case you haven't met her yet, this is Yola Mgogwana - our Khayelithsa Eco Warrior and environmental activist. Yola is marching in the footsteps of @gretathunberg and at the same time creating her own path for other young activists to follow! Yola says "My age does not mean my views on the world are not valid. I’m marching, singing, and shouting for my right to a liveable future". @fridaysforfuture ??@beautifulnewssa #fridaysforfuture #gretathunberg #youngactivist #ecoactivist #ecowarrior #climatechange #climatestrike #climatestrikecapetown #khayelitsha #beautifulnewssa #yolamgogwana

Earlier this year, the Grade 5 learner at Yomelela Primary School joined forces with hundreds of other young activists to march to the parliament of South Africa. “There were so many kids you wouldn’t be able to count them!” Yola recalls excitedly.

“We wanted the president to hear our plea.” Her job for the day was to lead a 2000-strong protest and deliver a speech. In it, she urged President Cyril Ramaphosa to make an effort to combat climate change. Was she nervous at all? “A little bit, but not really,” she shrugs. “I’m used to it. I felt so empowered and I want other kids to have that feeling too when they fight climate change.” Yola lives with her mom, Sandiswa, grandmother No-Andile, two uncles and a cousin.

At first her family couldn’t understand her passion. “But as time went on, they saw how important it was to me and how much I love it,” she says. “Now I have their full support.” At home she teaches her uncles and cousins about climate change and now they enjoy it too. “They always say, ‘Sifuna ichange’ [We want change],” she jokes. Yola was inspired by her school’s yoga instructor, Nokuphiwo Jada, and environmental facilitator Xoli Fuyani.

With their help, Yola grows organic vegetables and monitors her school’s water and electricity consumption. “I joined after Miss Xoli gave us an activity about polluting the earth,” she says. “That was when I fell in love with [combatting] climate change. Even her free time is devoted to learning everything she possibly can about global warming. When Yola isn’t reading a book on the topic, she spends her time picking up trash in the area. “When I see people littering it makes me sad.

Even before I joined Eco Warriors it got me very worried. That’s why I started my climate change work this year.” Every morning on her way to school she carries a black bag to collect plastic bottles and wrappers in the streets. Yola and her fellow Eco Warriors then stuff the empty plastic bottles they so diligently collected with compacted wrappers and papers. These are known as ecobricks.

Once they’ve assembled enough of these bricks, they plan to build things like chairs and tables. They still need to decide what to build but Yola says a worldwide collective effort is needed to combat the effects of climate change. “We are going to teach Grade 1, 2 and 3 learners how to make the eco-bricks,” she adds.

If waste isn’t properly disposed of, the litter ends up in our water systems, the digestive tracts of wildlife and reduces the quality of the air we breathe because of its toxicity and smell. But more than just its effects on the environment, Yola explains littering could affect our health too, as heaped up waste is often a breeding ground for pests, which could lead to the spread of diseases.

It’s just another reason the preteen, who plans to pursue a career as a lawyer one day, is advocating for the protection of the planet. “The Earth is important. If we keep polluting the planet we will have nowhere to live. That’s why we have so many natural disasters like floods and droughts,” Yola says. “If we young ones don’t do something to stop it, I don’t know what we’ll do.