WATCH: Mother twerks at son’s graduation before being escorted away by security 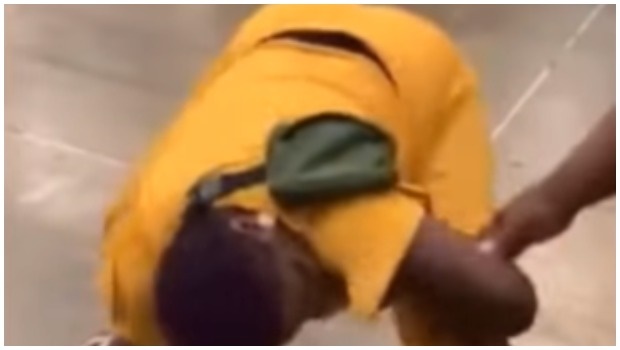 In the video which has since gone viral, the woman who is dressed in a yellow jumpsuit and rocking purple hair, can be seen breaking into a twerk in front of the entire auditorium as her son’s name is called while he is in the queue to go on stage and accept is qualification.

The woman continues twerking as other students and family members cheer her on while others watch in amusement. Eventually she is led away by security who then escort her to her seat.

While others were entertained by the mom’s reaction to her son’s proud moment, others criticized her and called her out for “embarrassing” her son.

And mark my words... She’ll be the next ratchet getting millions of dollars for a reality TV show for her and her son... TV execs will eat that up... A college bound son with a ratchet mom??? https://t.co/nvJ1MTTFBv

Should she be ashamed?

At her son graduation. https://t.co/DiDmsdw0gD

Bruh...I really hope he thought this was funny cause I promise I wouldn’t talk to Sue for a hot 60 days

Out of Control Mom Twerks at Son’s graduation https://t.co/OrPGJxFkuO via @YouTube

It is not the first time that parents of a graduate have expressed their joy so openly during the moment. Earlier this year, the University of KwaZulu-Natal’s (KZN) graduation ceremony made headlines after parents proudly ululated, danced and cried in celebration of their children.