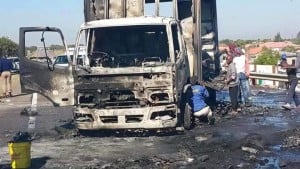 Deputy President Cyril Ramaphosa has cautioned against tribalism in the wake of the violence that erupted in the Tshwane metro.

Protesters unhappy about the ANC's nomination of former minister Thoko Didiza as mayoral candidate have set fire to buildings and overturned vehicles in and around Tshwane since Monday.

"We are very, very concerned that this whole problem is beginning to acquire tribalistic type of tones, where it is suggested that someone who was born in another province, but lives in a city, in a metro like Pretoria, should not be the mayoral candidate of Tshwane," he said.

"Now this goes against the values that we always sought to embrace as a people and as a nation.

"We say let us uphold our values that are deeply embedded in our Constitution. Let us practice them because it is important that we as South Africans act as one and be truly non-racial and be truly democratic in everything that we do," he said.

Didiza was born in KwaZulu-Natal, one of the things some protesters have taken issue with.

Army won't be sent in

Ramaphosa said there was "deep concern" about the reports and images "of the destruction of vehicles and the attack on government facilities".

He said: "We want to call on our people here in Tshwane, the various structures that we have… violence is not a way of addressing problems. If there are problems, you need to sit down and discuss the problems. We condemn acts of violence in the strongest terms."

He said, despite rumours that the army could be called in to quell the situation, there was no talk of that.

"We believe that the situation can be contained and we currently [have] a lot of structures – political structures – that are busy talking to our people, addressing our people to calm down and we hope that this will be a process that will bear fruit.

"Our people are not violent by nature and we're hoping that as the [talks and meetings] happen, and as the leaders address this problem with our people, there will be a sense of calm."

Ramaphosa, who was addressing journalists after a meeting of the presidential working group on labour, said he did not believe the violence would affect investor confidence negatively.

"This is a process of people exercising their democratic rights, but obviously we want people to protest without resorting to violence."

"We are hoping this situation will be brought under control fairly soon so that we can move on," he said.

Ramaphosa said he believed the situation would quieten down before the local government elections on August 3 and that they would proceed as planned.

By then he said he hoped "our people will have a better understanding on the reasons and need to deploy a person like Thoko Didiza as a mayoral candidate of a place like Tswhane and they will calm down and be disciplined and we will have this matter resolved in the end".

He called on people to "stay calm to desist from violence" and not be tempted to perpetrate it.

"We say to you, the security forces in our country, the police, is on hand to make sure that you do not perpetrate violence against anyone, and if you do perpetrate acts of violence, you're violating the rights of other people, and you shall be arrested."