Zahara and musician Nhlanhla Nciza at her birthday celebration.
Twitter/Zahara

South Africa’s very own country girl, Zahara hosted an extravaganza to celebrate her 33rd birthday over the weekend.

Friends and family gathered at Lush Lounge in the west of Johannesburg to celebrate the star. Her guestlist included the likes of Nhlanhla Nciza, Aaron Molosi, Ringo Madlingozi, Tresor, Berita, and many more. 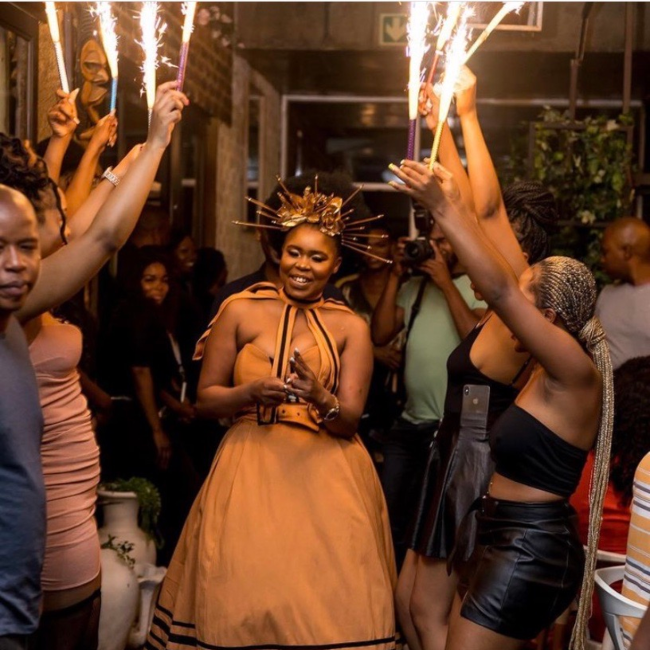 Read more | Zahara on her evolution over the years: 'I love the woman I’ve become'

The star posted a picture of herself looking fabulous in a beautifully detailed dress by local designer Tomi Rikhotso and a gorgeous gold headpiece.

She took to the stage with Nhlanhla Nciza to serenade the guests and thanked them all on Instagram and Twitter for coming out to celebrate her birthday with her.

Even though the star has had her ups and downs with record label clashes and a battle with alcohol addiction, she put it all behind her to enjoy a very special night. The woman of the moment flanked by her manager Oyama Dyosiba (right) and media personality Yaya Mavundla.
Instagram Instagram/Yaya Mavundla

Zahara rose to stardom when she was signed by TK Nciza to TS Records after he discovered her in Eastern Cape. She went on to win several awards, including South African Music Awards (SAMA) for Best Female Artist, Album of the year, Best Selling Album and Best R&B, Soul and Reggae Album.

One of her fondest memories as an artist was being invited to the home of former president Nelson Mandela to sing for him.

The Loliwe star is currently in studio working on an album and a documentary that will detail her journey to stardom.

We live in a world where facts and fiction get blurred
In times of uncertainty you need journalism you can trust. For 14 free days, you can have access to a world of in-depth analyses, investigative journalism, top opinions and a range of features. Journalism strengthens democracy. Invest in the future today. Thereafter you will be billed R75 per month. You can cancel anytime and if you cancel within 14 days you won't be billed.
Subscribe to News24
Related Links
PHOTOS | Zahara returns home: 'I'll forever be a village girl. The soul will always be within me'
ZAHARA EXCITED AFTER SCORING MAJOR TV GIG
ZAHARA: I USED TO CRY MYSELF TO SLEEP!
Next on Drum
Sithelo Shozi travels to Turkey for a Brazilian butt lift and liposuction