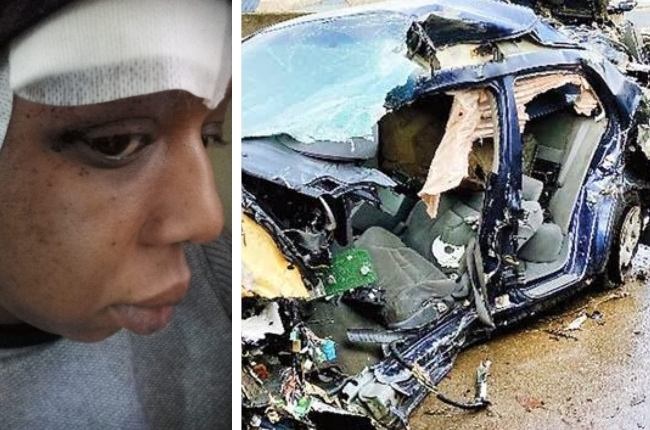 Giyani actress Akeelah Zinhle Hlamalani Mavasa lost her son to lung disease and soon after she was involved in a car accident.
Supplied

Her career as an actress was off to a good start. Everything was going well for her.

In 2019, she secured a role on Giyani - Land of Blood and she was working on building her brand and gunning for other roles.

But this year, things have taken a turn for actress Akeelah Zinhle Hlamalani Mavasa (26) and she feels like nothing seems to be going well.

“My baby passed away from lung disease and brain damage,” she tells Drum.

“He was born with lung disease, but I thought he was going to live longer. I had faith I would see him go to high school  and university, but God had other plans.”

The actress says things have not been going well in her life and it has been a tough year.

“I honestly don’t know what is happening. I am at a loss for words. But I am not giving up. I know things will eventually work themselves out and that everything happens for a reason,” she says.

While trying to deal with the death of her infant, Akeelah was involved in a horrible car accident a day after her son's passing.

On Saturday while driving alone to pick up her father in Orangefarm, she crashed.

“I was going to fetch my dad in Orange Farm around 10am. I was coming from my place in Braamfontein and ready to get onto the Golden highway offramp,” she says.

“The robot was opened for me and an H1 came and hit me on the driver’s side. I really don’t know what is happening.”

With head injuries and a few scars, she believes she will be okay to bury her son on Thursday 23 June.

“I was admitted at Baragwanath Hospital in Soweto and told I have sustained a head injury."

Although she is trying to forget the horrible day and focus on her son’s funeral, she keeps getting flashbacks from that morning.

“A few people came to help me. My car has been completely written off. It’s completely damaged. I am lucky to be alive to tell the tale. I just want to focus on burying my son.”

Read more l From the archives | ‘If I could have a do over of my life, I would still choose Mseleku but not isithembu’ – MaCele

Akeelah is best known for her role as Matimba, a Personal Assistant at Vukosi on Giyani- Land of Blood. After being on a break from the show, she was meant to return to work just before the death of her son.

“We are on a break, and I will hopefully return for season three,” she says.

“Work helps to take away a lot of stress and with everything that’s been happening, I really just want to focus on recovering emotionally and spiritually,” she says.

Before joining Giyani - Land of Blood, she played the youngest wife in a polygamous marriage in the show The Bantu Hour.

We live in a world where facts and fiction get blurred
In times of uncertainty you need journalism you can trust. For 14 free days, you can have access to a world of in-depth analyses, investigative journalism, top opinions and a range of features. Journalism strengthens democracy. Invest in the future today. Thereafter you will be billed R75 per month. You can cancel anytime and if you cancel within 14 days you won't be billed.
Subscribe to News24
Related Links
'I see life differently now' - L’vovo grateful to be alive after horrific car accident
Umkhokha actor Mbuso Khoza on his recent car accident - 'I was targeted'
Rising Star Yung Nasa on the accident that changed his life
Next on Drum
DJ Sabby on moving to weekdays on Metro FM - 'I always knew I would end up here'