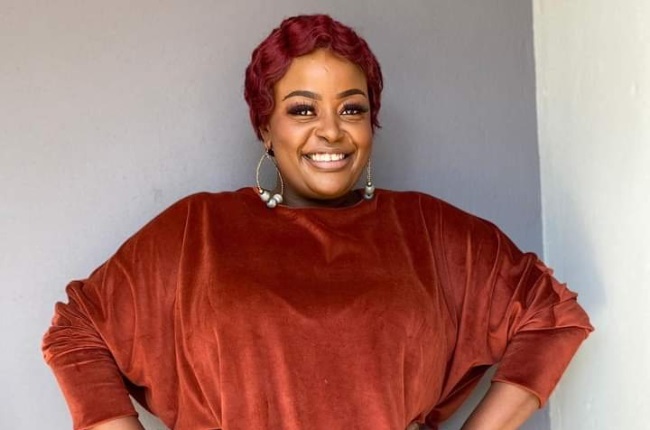 Vele Manenje believes confidence and talent are all one needs to get ahead.
VeleManenje/Instagram

She's been there, done that, and got the t-shirt. She was once considered too dark-skinned, too big, and not good enough to play a lead role.

She was always type-cast and often played the big girl eating cake or a bar of chocolate at the back of the class until she put her foot down and realised her worth.

She knew from an early age that she had a special gift of storytelling, but it was those around her that made her doubt herself.

This is why she relates to what is currently happening to her character Maureen (Momo) on DiepCity.

Viewers recently witnessed a heartfelt episode where Maureen started doubting herself after her husband cheated with light-skinned slimmer women.

“Maureen is going through a lot,” Vele says.

“She is pregnant on one hand and the other, she is emotional and losing her mind because her man is cheating. She is doubting herself, her beauty and whether she should bleach her face and maybe he would stop cheating.”

Vele sympathises with Maureen because there was a time she doubted herself. But not because of a cheating partner, but because of the high-pressured world of showbiz.

“There were times when I would audition for a part and not get it but see the lighter and slimmer girl on screen,” Vele says.

“I would know that I was rejected not because I am not good enough but because she is lighter and slimmer. So, I could relate to Maureen, I understand what she is going through. I have been there.”

Even while young and in high school, the guys she liked would often go for the lighter, slimmer girl.

“Those are the standards set by our society, I’m afraid. That is something that is being put on TV, social media in the dating scene and you can’t miss it.”

Some years ago, Vele auditioned for a lead singing role.

“I thought I was going for a lead singing actress, and when I got there, the brief said I am the dark-skinned fat girl who sings backstage. The girl in front who will be using my voice was tall, skinny and light. I lost it,” Vele says.

“They were telling a story, but the character was ridiculed. They were addressing the issue of beauty standards, but I felt humiliated.”

This made Vele very unhappy.

“I lost myself in my room for two weeks until my mom helped me to get out and look for other auditions. It was bad. I fell into a dark space, feeling sad for myself. I was thinking, am I always going to be playing a ridiculed and belittled character who comes with comic relief or eats chocolate on screen all the time. And that wasn’t going to be me. I decided to snap out of it.”

Read more l How to protect yourself from cyber crimes

But she stopped the self-pity before it got out of hand. “I was quick to get out of that energy.”

Vele says even with the doubts, she has always known she is talented.

“I’ve always known the power I possess, the power of great performance. I am a drama queen. I have always trusted my performances, my aura, and my presence. So it didn’t take long for me to get out of the insecurities. I didn’t dwell on the colourism issue,” she says.

“The issue still exists in our society and our industry and it affects others more than it did with me.”

Vele credits her confidence to her family who have always been supportive.

She is the only actress in her family; her mom is a retired deputy principal, dad, a chief, her older sister a police officer, and the other a teacher and they all stood by her when she went to study at the National School Of The Arts.

“I am blessed to have the kind of family I have. They saw the performer in me at a young age and nurtured it,” Vele says.

“When I’m not getting jobs, I perform for my family. They always knew I could mimic a character and I always had the spotlight in the house. They helped to build my confidence. They have never said umkhulu (you’re big) lose weight. But they’ve supported me with every diet I’ve tried. That contributed a lot to my confidence.”

We live in a world where facts and fiction get blurred
In times of uncertainty you need journalism you can trust. For only R75 per month, you have access to a world of in-depth analyses, investigative journalism, top opinions and a range of features. Journalism strengthens democracy. Invest in the future today.
Subscribe to News24
Related Links
Skeem Saam actress Pearl Maimela Nikolic is now a pastor
PICS | Inside Ntando Duma's 26th birthday party
Dawn Thandeka King on her knee injury – ‘It has been four months and a frustrating journey’
Next on Drum
When you're good, you're gooood – Trevor Noah gets nod to host Grammys a second time