Ontiretse shares her joy on playing Martha on The Black Door.
supplied

She brings a lot of humour into the racy e.tv adults only telenovela, The Black Door.

So much so that viewers have fallen in love with her role and so has she. She loves the cat and dog fights she often has with Nkanyiso (played by Nzikayise Makroti) on the show.

“Sometimes when I am chilling with my friends and family, I do things that are stupid, I make jokes and sometimes mock one of them,” she says with a giggle.

She's one of the fresh faces the production has brought into the spotlight.

She says when she was told that they were looking for a short person who will be playing an older woman as a domestic worker on The Black Door, she knew it was her time to shine.

“So, when they said they wanted someone who is like me, they requested a video of me washing dishes first. I did that and they said I was hyperactive, I can play that role.”

Her love for the arts goes back to when she was much younger. She recalls falling for the industry during a trip to YoTV at the SABC, saying, “That is when I first appeared on TV.” She then became part of YoTV Land as one of the kids who used to scream, “Yebo malume”. 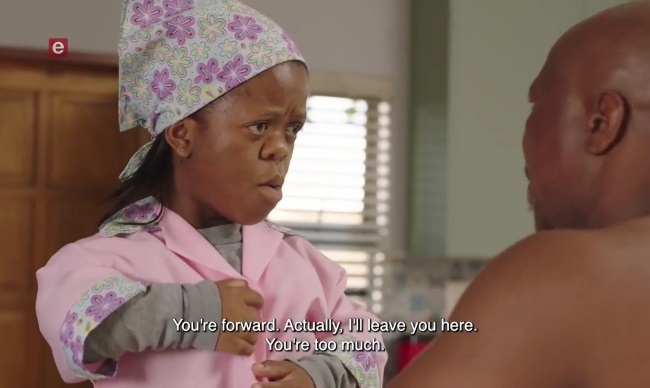 Martha with her rival, Nka
supplied

“All these things came when I was young, and I made sure that I use the opportunities very well,” she says.

She's got quite a busy schedule. “I am dancer and I am studying as well, I am in Grade 10 this year,” she tells Drum.

She says although she is trying to find time to juggle what she loves and school, she is grateful that she does not have to go to shoots more often.

“I am still trying to find space, but I am managing because at The Black I don’t go every day, they do understand that I am still a learner and they give me the time.”

When sharing her thoughts on her character, she says she does not like the fact that Nka is giving drugs to Mam Ribs' daughter.

“Being Martha is really exciting and nice, people are appreciating me because they can see that I can play that role well," she adds.

"I do have a sense of humour in real life, so I am able to tap into that as well for when I'm acting.”

We live in a world where facts and fiction get blurred
In times of uncertainty you need journalism you can trust. For 14 free days, you can have access to a world of in-depth analyses, investigative journalism, top opinions and a range of features. Journalism strengthens democracy. Invest in the future today. Thereafter you will be billed R75 per month. You can cancel anytime and if you cancel within 14 days you won't be billed.
Subscribe to News24
Next on Drum
Connie Ferguson wins Favourite Personality award as Mzansi stars honoured at this year’s #DStvMVCA