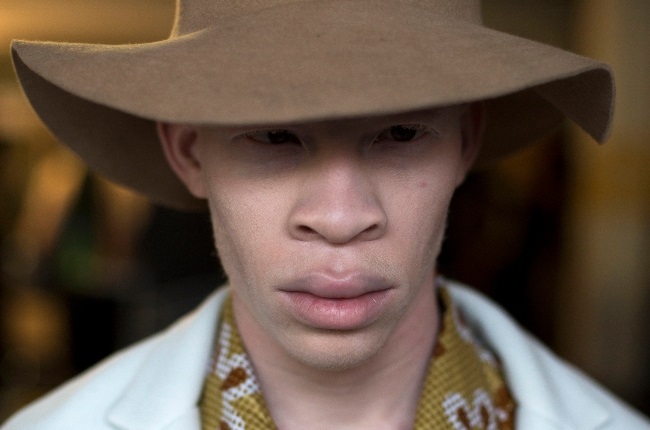 Sanele Xaba has been making waves internationally as a male model and has been raising awareness about Albinism.
Megan Miller

This article was first published in the print edition in 2017

People stop to stare as he emerges from a cab in  one of Cape Town’s busiest streets but he barely notices – he’s been gawked at for as long as he can remember.  But these days Sanele Xaba isn’t only turning the heads of curious  strangers, he’s attracting attention from some of the top dogs in the modelling world and all eyes are on him as he strides confidently down the catwalks at international fashion shows.

The 22-year-old was named the face of the Bermuda International Collections – an initiative that showcases the talents of designers from around the world – and when we catch up with  him he’s just returned from a show in Amsterdam as part of the collection. “Amsterdam is an amazing place,” he says enthusiastically. “I would love to be able to afford to buy a flat there.”

He divides his time between Cape Town and Europe and loves exploring new places, he says. Sanele has taken centre stage in shows for top brands such as Adidas and Japanese fashion house Kapital Clothing and proudly declares he has “penetrated the international market”.

Last year the born and bred Durbanite was nominated for male model of the year at the Abryanz Style and Fashion Awards in Kampala, Uganda, showing  he’s making his mark in Africa too. Sanele is the first South African male model with albinism to crack the international scene and sometimes he still has to pinch himself to make sure he isn’t dreaming. “It’s been a fantastic journey and I’ve been truly blessed,” he says. “It has boosted my confidence in a big way.

“I used to be shy because of all the negativity I experienced but now I feel like I’m an ambassador for every person living with albinism. I want my success to motivate other people with this condition to dream big and not feel ashamed.

“We are capable of achieving anything in life and our skin shouldn’t be a stumbling block.”

Sanele isn’t kidding when he says he’s experienced negativity – in fact, it started from day one when members of  his family asked his mother,  Sithembisile, whether she’d taken the wrong baby home from the  hospital.

When he was growing up in Lamontville near Durban, people called him names such as umlungu (white guy), which baffled and upset him as a little boy.  “I was living among these people and speaking their language.

"I kept asking my mother why I couldn’t have a black  skin like everyone else. I was tired of being different and attracting attention wherever I went.”  After primary school his mom sent him to Glenwood High School in Durban,  a former model C school, hoping he would be more accepted if he escaped the day-to-day ridicule in the township.

Sadly, it wasn’t so. Not only was he taunted by his classmates, he also endured snide remarks from adults as he made his way to and from school.  “I could almost understand the remarks from fellow learners because they were just kids. But to get the same treatment from adults was heartbreaking.

“However, every time I went home and told my mom about my daily experiences she told me to ignore them and always assured me of her love and support. She  was my rock and still is.” Then something happened that changed his life forever and made his bullies look at him with new eyes.

Sanele, who had grown into a teen with striking looks and lithe limbs, was out on the streets of Durban one day when he was scouted by a representative  from iindoni Models agency.  She told Sithembisile her 15-year-old  son was destined for great things in the modelling industry, which is always on the lookout for the unusual and the  exceptional.

“Luckily my mom agreed and I signed up with the agency,” he says. “I remember my first gig was at a fashion show at the Durban July in 2010.

“I couldn’t believe my eyes when I got a cheque for a couple of thousand rand – it was quite a lot of money for a 15-yearold. I bought myself a BlackBerry and gave the rest to my mother.”

During the Durban July Sanele met  Andre Martin, owner of clothing brand Life, who told him how impressed he  was with him and how he would love to  use him in some of his campaigns.

Read more | My Story | 'Leave him and go where?' - Isencane Lengane's Thando on her marriage

“I told him to speak to my agent,” he  says with a chuckle. “Before I knew it my face was in every second shop in some of Durban’s most upmarket malls!”  Gig after gig followed but Sanele made sure they happened over weekends so they didn’t interfere with his schoolwork. After matric he decided to dedicate  himself to modelling full time and see  how far he got – and so far, so very good.

If there’s one person who has inspired  him over the years it’s Refilwe  Modiselle, South Africa’s first female model living with albinism. “I respect Refilwe a lot,” Sanele says. “I think she paved the way not only for young women with albinism but the whole community.

"I’ve met her a couple of times and she’s given me a lot of advice on how to keep my head up in  this industry.”  In a continent like Africa, where people  living with albinism are persecuted and even murdered because of the colour of their skin,  Sanele wants to  play a leading role in creating awareness and  fighting the  stigma.

He often does motivational talks around the country and is also part of Under  the Same  Sun, an NGO in  Tanzania that educates people about  albinism  and fights discrimination. “Over the years a number of  people with albinism have been murdered in Tanzania for all sorts of weird beliefs. I’m glad to be part of the NGO – it’s something that’s close to my heart.” As for his heart when it comes  to love, it remains free.

Given his hectic schedule and frequent travelling, he admits he would be “doing  an injustice to a relationship”.  “What girl wants to date a guy who’s forever away? I don’t want to date for the sake of dating. I want to give my partner my full attention and right now  modelling is consuming all my time.”

But he would love to be in love “when  the time is right” and start a family. “I want to have as many kids as possible – and adopt some too,” he says. And when that happens, they can talk  about how their daddy helped changed  the world and make it a better place.