Gee Six Five’s son releases an E.P to celebrate her memory – 'She was very loving mother' She was an unexpected surprise in the music industry. A 65 year old retiree starting a music career with one hit just because? It was unheard of.

Until the popular Gee Six Five hit social media and the airwaves with her song Obani Lababantu in 2020 and suddenly she was a star.

Her song became an instant hit and her amapiano jam was trending for days. But her fame was shortlived.

Gee Six Five, real name Olpha Selepe, passed away shortly after the release of the song. She died due to Covid-19 related health complications.

In a interview she did with DRUM before death she said confidently that she believed she was a talented artist.

“I recorded my debut single at this age because I wished to send out a very important message to the people of South Africa. I decided to use the amapiano sound because it appeals to the youth and it is what is trending right now. I trusted myself and realized that no matter my age I am a talented artist.”

Now her son Fika Selepe wants to make sure his mother’s legacy continues to be remembered.

Read more | Why Gee Six Five plans to be a one hit wonder: “I want old people to chase after their dreams”

Fika (39) is in the entertainment industry and has multiple projects including events management and planning.

He has collaborated with many artists to release an E.P in memory of his mother Gee Six Five. The EP consists of seven songs and they all renditions of her chart topping single “Obani Labantu”.

“The EP was an effort from us to get closure after her passing, we wanted to carry on her message as well because that song touched so many people in South Africa. The EP consists of mainly Obani Labantu with different producers and different artists such as Blue Light who brought a Motswako vibe to the song as well as Mr Brown who is a producer. We worked with a few guys from Durban as well. We also featured Teepee Soul, its different versions of Obani Labantu”.

Fika says he's holding on to everything she has taught him.

“She was a very loving mother; she was someone who went all out for her family and she loved her community. She was a true prayer warrior, growing up she was very disciplining, you couldn’t mess with her,” he jokes.

“The EP is already out and can be found on all music sites, soon we will be shooting a video for the song.”

Another man inspired by Gee Six Five is local artist Sakhile Mhlongo from Umgababa, Durban who has painted a wall size picture of her in her hometown, Newcastle.

"I was inspired by her bravery. She has done amazing things at her age and inspired us as young people to hustle harder and also showed us that anything is possible. I wanted to do something that will be a symbol of respect. Saluting her and also reminding people of her role in 2020. I spoke to her family asking for permission to do the painting then they gave the go ahead.

"It took me two days to complete the the mural," Sakhile tells us. 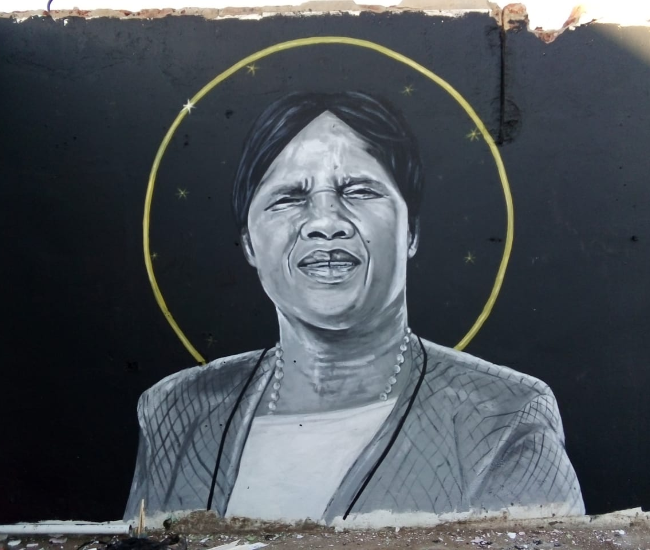 Sakhile Mhlongo painted a wall size picture of Gee Six Five because of the impact she made in the lives of South Africans in 2020.
Supplied Sakhile Mhlongo. Sakhile Mhlongo painted a wall size picture of Gee Six Five because of the impact she made in the lives of South Africans in 2020.
Supplied Sakhile Mhlong

Sakhile says being an artist can be hard, especially when it comes to making your family understand your chosen career path.

"I have faced so many difficulties as an artist in the past years since they did not understand my journey at home but now they seem to understand it a bit. The other thing that was making it hard for me as an artist is not making enough sales or having people who will support me in this journey."

We live in a world where facts and fiction get blurred
In times of uncertainty you need journalism you can trust. For only R75 per month, you have access to a world of in-depth analyses, investigative journalism, top opinions and a range of features. Journalism strengthens democracy. Invest in the future today.
Subscribe to News24
Related Links
Gee Six Five dies after fulfilling life long dream
Why Gee Six Five plans to be a one hit wonder: “I want old people to chase after their dreams”
RASTA PAYS TRIBUTE TO GEE SIX FIVE
Next on Drum
Nelli Tembe's family share some of her dreams – 'Her wish was to fall in love and get married'