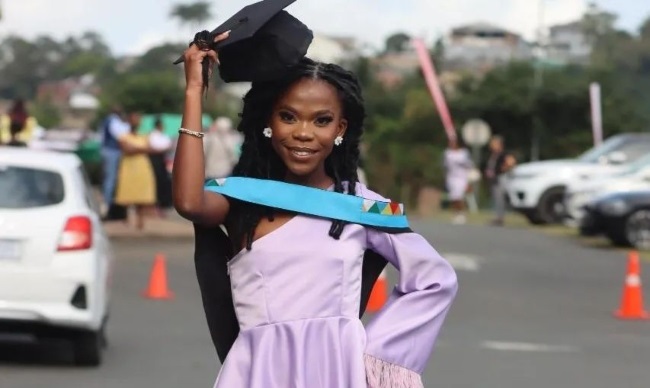 Her graduation day was one for the books. It's not everyday when a singer gets their song played while she's walking the stage. She not only got a standing ovation from her peers, they also sang right along as the lyrics represented exactly what they wanted after graduation - a soft life.

But the surprises kept coming. Just as she stepped off stage, she was presented with a plaque for her song Phakade Lami going platinum.

Singer Nomfundo Moh is still in awe of how everyone at the University of KwaZulu-Natal celebrated her. The now qualified social worker wants to give back to the community as a token of appreciation for all she has received.

“I already planned that on stage I was going to sing the song ‘Soft Life’ and then let my colleagues back up my singing because I know we always support each other. So, when the song played without me knowing, that was a surprise. I began to see things from a different perspective that ‘these people are truly happy for me’ and it was them singing and rejoicing with me,” she says.

“When I was still excited about that, as I walked off stage and then here is a double platinum plaque for Phakade Lami. I couldn’t stop crying, I am such a cry baby, I was never ready especially because the song went gold maybe about two months ago. So, I was still happy about that and on to that. For me to go double platinum right now, it was just a double blessing and having everyone around me.”

She says she is not an outgoing person, so after all the celebrations of success, she asked her team to cancel her gigs so she could spend time with her family.

“I felt the need to be home after such an amazing day. I was like no let me just enjoy this day with my family and have some intimate family braai and be happy.”

She says the song it is more about manifestation for people who wish to live better life than they are living today and feels that she is also living up to her song slowly but surely. “I can say that my manifestations are coming to life slowly and I am glad that all this is happening; the world is watching. I am not yet where I want to be, but I am two steps ahead from where I was yesterday and that happens when people are watching. They are more inspired because they see it as it happens."

After matric, she enrolled for a social work degree to help others, and kept dabbling in music in her spare time.

“I believe I was born as a musical person, but I am passionate about helping people. I am always concerned about people’s wellbeing, so I did social work because of that love I have for people and Ubuntu. Not knowing that while I was studying and doing music in my bedroom at res for fun, people were watching, and they encouraged me to do music even more and that motivated me to never look back.

“I was doing music part time and it wasn’t something that I felt that I’d do full time or as a career but fortunately enough, all those videos I kept on making consistently whenever I got time were well received and I felt that last year, I was at a point where this music was getting serious. But I had this degree that needed me to work on it, I had to finish what I started, that’s where I drafted a timetable.”

She says in future she hopes to own a foundation to assist people in reaching their fullest potential, like she was able to. Nomfundo believes that a lack of knowledge is still an issue.

“It will also be my way of growing my brand as Nomfundo Moh because I now regard myself as a public figure so it is a need for me to give back to the community, when I am able to afford to. That is where I will use my degree to establish a foundation that will assist the youth with things like university and NSFAS applications because that helped me so much as well for me to study at UKZN till I finished. And a lot of people are still stuck on how we do that.” 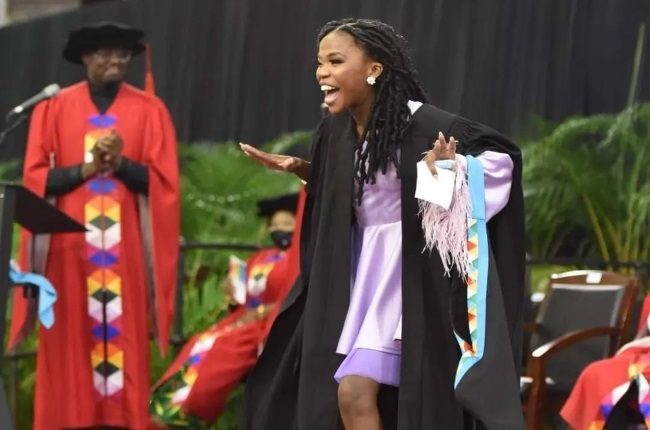 Nomfundo says she is working on a deluxe version of her first album, Amagama, which will have new songs and she is grateful for the ongoing support from fans.

“I would like to bring back the name of my album, Amagama, because I made the album Amagama to I say kusele amagama okubonga ku wonke umuntu [what's left for me are words of gratitude] who is supporting my music and others are supporting without knowing me. So that is giving back now to say I am short of words to show how grateful I am to everything that people have been doing for me.

"I’ve realized how much people love me and how much people wish me the best in life. I saw that when I was graduating and some are still calling, sending texts and commenting that they were crying whilst watching those videos on social media, that’s why I’d like to thank everyone for their contributions in helping me reach greater heights, I appreciate that and wish you well in life."