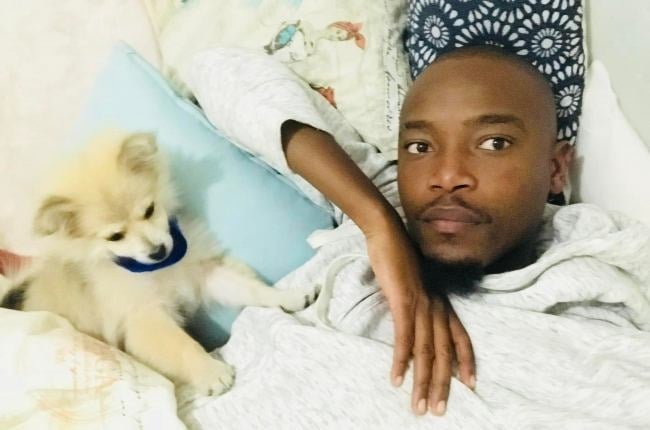 Radio and TV personality Moshe Ndiki recently shared that he was mourning the death of his puppy Sugar Ndiki. Taking to social media, he wrote about how it has been difficult dealing with the death of Sugar.

"I’ve been going through the most the past two days, trying to put it aside just for me to work and saying to myself I’ll grieve on Sunday,” he wrote.

“Baby, I love you so much @sugarndiki. I love you and hope the other side treats you well. Glad to have loved you, known you, and been your dad and mom.”

Moshe shared many memories with Sugar.

“So many memories, you’ve been my first born, and what a pity you couldn’t meet your sibling. I’m shattered and I’m asking myself, ndiyintoni ngaphandle kwakho Sugar (What will I be without you Sugar). I love you sana lwam. Funeral and proper arrangements will be made soon,” Moshe added.

“#RIPsugarsosweetfuneral arrangements made. Rest east baby. Thank you Nono Events for making it more bearable, sending my pup off in a way that he would definitely loved, love you ke sweety.”

"Thank you to everyone that sent condolences , attended the funeral and sent us heartwarming messages, you’re truly appreciated, thank you to my friends and family for understanding my pain and how much I loved my pup , @sugarndiki always and forever."

Speaking about his loss, Moshe tells Drum he had his Toy Pomeranian breed for five years.

"I've had Sugar for five years," he says.

"He passed away almost a week ago after being bitten by a pitbull. I decided to have a lavish funeral, why not? People do it for their loved ones, their kids, and their parents and why can't I do it for my pet? He was a constant in my life. I loved him. I don't see a reason why not and I don't see anything wrong."

On people commenting that he could have spent his money elsewhere, Moshe says people will always talk about whether you do good or bad.

"People are people and it's in their nature to talk and to react to things they are not familiar with. I have never been to a dog funeral, it was my first time attending and organising one. But it is not about critics. People like to set a certain standard for using their own standards."

Moshe's puppy is buried in his hometown of East London.

He is not yet sure whether he would get another puppy anytime soon.

"I don't know if I would get another puppy. It's still too soon. I'm not opposed to it but it would be weird naming another puppy Sugar. But for now, I just want to grieve." Messages of condolences from fans and friends have since poured in for Moshe.

Mercy Moyo wrote: “I used to laugh at people who cry after losing their dogs until my mom lost her dog who had protected her for close to seven years. His name was Wolf, he was hit by a taxi and broke 3 legs and the vet had no option than to put him down. Worst experience ever, mine got poisoned, then took him to SPCA, they called saying there's nothing they could do to save him so they had finished him off. Yooh! The way I cried at work that day, I was even sent home because I couldn't cope. Since then, I don't think I'm ready to have another dog again.”

Thando Bhelekazi Nontanda says, “Just lost mine a week ago, they have stolen it. I cried so much but I’m still looking for it. I hope I will find it. I’m so heartbroken.”

Hope Moropa wrote, “The pain of losing a pet is close to that of losing the one thing that made sense in life, unconditional love.”

Nobuhle Zungu relates, “I also lost my Puppy this afternoon. I watched him die. I literally felt sharp pains in my heart. I loved that Lil Man. I never thought I could love an animal like this.”

We live in a world where facts and fiction get blurred
In times of uncertainty you need journalism you can trust. For 14 free days, you can have access to a world of in-depth analyses, investigative journalism, top opinions and a range of features. Journalism strengthens democracy. Invest in the future today. Thereafter you will be billed R75 per month. You can cancel anytime and if you cancel within 14 days you won't be billed.
Subscribe to News24
Related Links
DJ Zinhle opens up about finding out she's pregnant, Bongani and her fears
PICS | Boity gets a cute new bestie
What to do when you're mauled by your neighbour's dog – a legal expert weighs in
Next on Drum
‘Magesh taught me to believe in myself’– TKZee members Zwai and Kabelo’s final goodbye to friend Tokollo