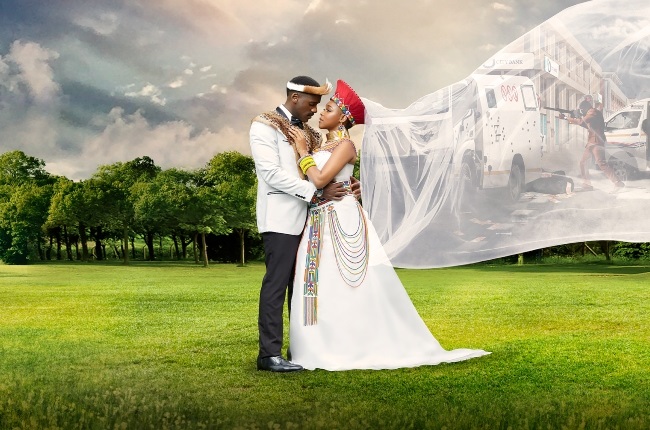 South Africans will get to see their favourite characters come to life when The Wife airs on Showmax.
Supplied

It started with an idea, which became a book, which has now turned into one of the most anticipated shows in South Africa.

And author Dudu Busani Dube got the ball rolling and now she gets to watch her characters come alive in a series on Showmax. “It feels like…what? Ok I just saw the first episode for the first time and it’s very impressive, the story has taken a different turn and I think it’s going to be very interesting, and people are going to love it.”

She's got a massive following for her Hlomu the Wife series, with fans getting highly invested with each book.

They've been calling for it to be made into a series for a while now.

At first, Dudu wasn't moved. “It wasn’t really a thing for me, I wasn’t even minding it and immediately after the first book, while I was still writing the other books, I was like ok no I’m not going there. Then the production companies wanted to talk to me about it, telling me what they wanted to turn it into.”

Would she do this again with other books? “It’s been a lot. If you understand where my readers come from, the past three weeks have been a lot, but if another opportunity comes, because everything has worked out so well that I think, if it happens again then yeah, I guess I wouldn’t be opposed to it.”

Dudu wants her readers to give the cast a chance as some fans weren't impressed when the actors were unveiled.

“My thing will always be, I wrote books that are fictional, the characters don’t exist, and they can never exist in reality. So, I knew we’re never going to get the Zulu brothers I wrote about, but I knew I wanted good quality actors. So even if they’re not tall, I wanted viewers to watch and see uQhawe, uNqoba, to see uMqhele and I feel like that’s exactly what is happening. I’m so happy, all I wanted was talent and I got that. My readers are my people, and we fight all the time, but then we make up, I know they’re going to love it.”

Hlomu being the focus of the story has made this one of the most sought-after roles, a role that was landed by actress Mbalenhle Mavimbela.

Being Hlomu was intimidating at first but Mbalenhle felt she could use it to her advantage.

‘’I was very intimidated but not, at the same time. But I knew feeling like this would make me perform to the best of my ability. So, I just thought let me take it like a man and do my best. So, I was intimidated by how much it was hyped. I told myself 'Mbali you are going to be the calm in all the storm."

Mabli had her eyes set on the lead role throughout her audition.

“I manifested it. I told myself that this year I’m going to get a lead role. A strong female character. And I was basically describing Hlomu without realising it.”

Relating to Hlomu wasn’t hard for Mbali, she feels they are the same person. “I am Hlomu, not necessarily the events she goes through but her heart, personality and what drives her. Even the journalism thing, my mom always wanted that for me and I kind of get to do that with Hlomu. My sisters would read the books and they’d say 'Mbali, this is you'.”

Mqhele is played by Bonko Khoza, who came in contact with the book a few years ago.

“I was at the Bantu Book Festival in 2017 or 2018, I’m not sure and I read it, I took it more as a book for women. It felt more like a South African Twilight, it’s very romanticised. And the book was all through Hlomu’s eyes and I didn’t really relate to him.”

He was excited to portray Mqhele in his own way. “What I was really excited about was to play the side that Hlomu didn’t tell us about, so how the story would be told through Mqhele’s eyes. The book has moments where he leaves and disappears for a while, and I’d wonder where he goes and what does or do when he’s gone.”

He didn’t see any similarities between himself and Mqhele at the beginning, but while preparing for the role he immersed himself in the lived experience that affected Mqhele’s emotions and mentality, such as the world of taxi drivers in South Arica.

"Beyond our own research, Stain Glass provided us with research. We had someone from The Taxi Association come onto the set and explain the industry, things like the hierarchy. I grew up in Joburg so I had experience with taxis as a passenger. You know getting taxis to school, things like that. The whole getting a taxi to Bree and then switching, but this experience kind of answered all those questions I had as a passenger, over the years.”

Now at 32, Zikhona Sodlaka has witnessed the different changes in the industry and she feels privileged to be yet part of another era, where South Africa is embracing its products.

"It’s a nice time for South Africa, because it’s becoming more and more proud of its products, from it’s shows to it’s authors and musicians,” she tells Drum.

Zikhona plays the role of Mandisa, the girlfriend and baby mama of Nqobizitha ‘Nqoba’, the older brother.

"Anyone who is familiar with the books knows who Mandisa is, the only difference is that she is not a wife, she’s a stable girlfriend,”

Having been in the industry for 16 years, Zikhona has cemented herself as a sought after actress.

"It’s been quite a journey, growing and doing the job of my life has been an unfair advantage,” she say.

Read more on:
south africahlomu the wife
You've got mail!