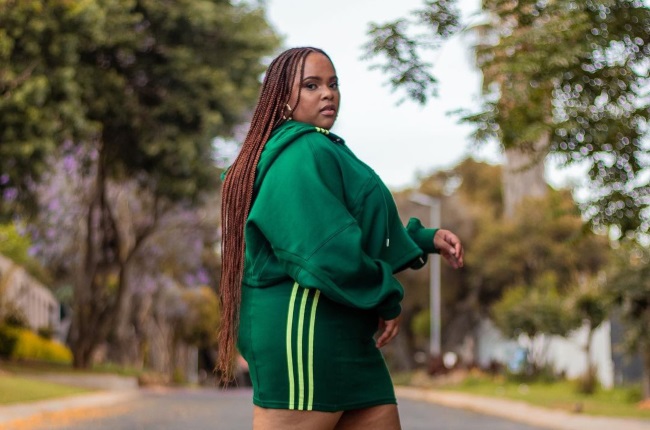 She was always meant to be on television, she says.

Before she was even born, her father told her mother that she was pregnant with a TV star. Fast forward 28 years later, she is an actress on one of Mzansi Magic’s most watch TV shows. She's also one of the screenwriters for the very same show and when she's not doing that she's keeping South Africans entertained with her Youtube content.

Wendy Gumede (28) tells Drum that she is living proof of how powerful words are.

“It was spoken into my life. My father prophesied it; he spoke to it. And that story for me will never get boring, ngoba [because] it just goes to show umlomo womunt’ uyadala [how powerful words are],” she says.

The star says she feels extremely blessed to be a part of such an incredible show like Isibiya, and what's even more awesome is that being a part of this show has made her feel closer to her late father.

“He was a taxi owner, so in a way, I feel closer to him in terms of telling these kinds of stories. I know that if he was still alive, he would have been Isibaya's biggest fan."

Both of her parents died when she was only a child and as young as she was when they passed on, from that very moment she knew that for her to live the life that she wants for herself, she has to work extremely hard.

“So, I grew up with my aunt, from my mother’s side of the family. I was raised in Durban and it was honestly not the ideal situation for everyone involved,” she says.

“It is always complex when you have children of your own and you are raising a child that is not yours. And I think wonke umuntu [everyone] would share that kind of sentiment ukuthi [that] it’s not ideal.

Wendy says she was a good kid, very smart and she had hopes that one day things would be better.

“I have a very extremist nature. And when into ngithi ngiyayenza [I say I will do something] I throw myself into it and ngiyayenzisisa [ I do it thoroughly]. So, dealing with the trauma after my mom passed away, I remember talking to myself and saying: you know what actually, I am going to do everything in my power to honor my parents as I was the last thing alive that is a mixture of both of them.”

The star says only now as an adult can she really conceptualize what she was saying back then as a kid.

“So, I was a really good kid. I went to school. I was head girl. I was just a typical black girl just trying to make a better life for herself,” Wendy tells Drum.

She threw herself into her schoolwork from primary up until university.

“I was in a financial situation and a family situation that I didn’t want to repeat for myself in the future. So, I worked. I was always working. Even in varsity when people were going to vacations and at home in December, I stayed in Cape Town and worked in different companies.”

Wendy says she did all this because she knew that was the only way to create a better life for herself.

"I didn’t have everything that I wanted as a child, but I did grow up with a very weird sense of hope as a kid. I just always knew that things would be better and that all my dreams would come true,” she says.

“It was hard, it was really hard. I think I cried more than I laughed as a child. But we are here now. And I always say I was raised by God whenever I talk about my childhood. I am like - God raised me, everyone else was helping but actually, UNkulunkulu ungikhulisile [God raised me] and I will never stop being grateful."

Wendy plays Nolwandle on Isibaya. Nolwandle speaks her mind, she is unfiltered and has an incredible sense of humor. But before Wendy was on television, she started career in 2016 when she created her YouTube comedy skit while studying Film and Television Production at the University of Cape Town.

That meant writing her own scripts and getting her friends to act in a few things. And when her friends weren’t around Wendy would do it on her own.

“I would perform as three characters in one video and edit the video to see how it would look.”

That how The Black Wendy  channel was born. She wanted to teach herself the practical stuff of her qualification and find out what she was good at, be it acting, directing, or writing.

“I mean the only way I could have found out ukuthi yini [what is it] that I was good at and what resonated with me, was only for me to put myself in that situation where I could learn.

And did she find what she was good at?

“I think I have. But I am the kind of person," Wendy says.

“Right now, for me, that’s acting. I love acting, writing is my first love. It will forever be, I started writing when I was 13. Writing short stories and I really enjoy writing. I even incorporated it into my degree."

Wendy says there is something about acting that challenges her more.

“And for now, I think I have found something that I really want to focus on. I even want to study it further. So, yes, I would say acting.”

Wendy tells Drum that starring in a production where she was also a screenwriter has been amazing.

“I didn’t start as an actress. I started in the writing room and when you are working with other writers you tend to see your personality.”

Wendy was having a conversation with the other writers when they asked if she didn’t want to be on screen.

“It was supposed to be a very small role for a very short period. They said just try it out, you have a degree and you are qualified. You can audition for us.”

The actress tried it out and loved it.

“I was like okay I will try it out and if the character speaks to me, I will do it.

“I loved it and viewers responded well to her - and now she has two boyfriends. Ziyawa, uyathriva [it is happening, she is thriving] I want her life,” she laughs.

She's no longer writing for the show.

“My contract with Isibaya was only for a year.”

And because there was so much happening for Wendy in 2020 and The Black Wendy Channel, she then decided to solely focus on her character Nolwandle on Isibaya.

“It was okay for them not to renew my contract so I could do other stuff because I had so much going on in terms of Black Wendy, I was doing adverts, aligning myself with brands, and having clients.”

Message to her parents?

“Ohh you want me to make me cry now,” she says.

The content creator tells Drum that if she could have the opportunity to speak to her parents, she would tell them that all that she does in life, all that she has managed to do, and all that she is doing is for them.

“I would say to them: I know that at some point even I will join them. But until that happens everything I do, every achievement, everything I try whether I get it or not - like everything that I do is just for them and it is because of them.”

Wendy says she would also thank her parents because she is all that she is because of the people that they were when they were still alive.

“What we don’t realise about the people that we love, is that the love that we have for them does something to you that kind of makes you the person that you are.

“I know that a lot of my attributes, my kindness, sense of humour or just being bold and brave, I take that from my parents. So, I would thank them for giving me the opportunity to learn those traits ; so I can incorporate them into my daily life. I am who I am because of them.”

We live in a world where facts and fiction get blurred
In times of uncertainty you need journalism you can trust. For only R75 per month, you have access to a world of in-depth analyses, investigative journalism, top opinions and a range of features. Journalism strengthens democracy. Invest in the future today.
Subscribe to News24
Related Links
Isibaya’s Nkanyiso Mzimela to Melusi foes: please don’t hate me too much
Zinhle Ngwenya returns to Isibaya after a two-year hiatus
Muzi Mthabela on his Isibaya exit: 'I left on a good note'
Next on Drum
Get to know the cast of Blood & Water season two