He's disappointed but holds no grudges.

But he couldn't just let it go without letting his followers know what was happening behind the scenes.

DJ Maphorisa has taken to social media to express his disappointment at how Lindokuhle “Mlindo The Vocalist” Mgedezi (26) exited his record label and started working with his road manager Nyiko Bilankulu.

“It’s so crazy how people will backstab you,” Maphorisa wrote on social media.

“Mlindo The Vocalists came to Jozi, he didn’t know anyone, etc and I had to get him a road manager. Cool, I asked Nyiko to help Mlindo. At that time Nyiko was super broke but cool and a hard-working guy. So, I gave him a chance, not knowing the devil.”

DJ Maphorisa 'discovered' Mlindo after the singer shared a video of himself remixing Maphorisa’s Midnight Starring and adding an Afro-pop to the hit.

He then reached out to Mlindo and flew him up to Johannesburg from Port Shepstone in Kwa-Zulu Natal where he signed him to Blaqboy Music and they recorded his first single, AmaBlesser which became a huge hit followed by his debut album Emakhaya

Before then, Mlindo used to sing cover songs on social media with his brother but after meeting Maphorisa his entire life changed, he rented a home for his brother and then unemployed mother.

“My mom had not been working and lost her job some years ago. Being able to take care of my family through what I love is a blessing and good feeling,” he once told Drum in an interview.

Maphorisa adds that Nyiko allegedly ran off with his artist without his knowledge.

“To cut the story short, after two years I hear Nyiko is Mlindo’s manager. They cut me off my percentage, and he promoted himself. I said cool, I will let them be even though I could take him back. I left them to do what they think,” he adds.

“Now Mlindo says he wants to come back to Blaqboy but contractually, he's still my artist. I Still love him, he is my boy, we all make mistakes and yes, we gonna make the next project but what hurts me most is you give people food and they shit on you with the same food u gave them.”

But Maphorisa says he holds no grudges.

"I’m not mad, why? Cause I have built a big room for disappointment. I have seen people come and go in my life a lot. Sis Brenda Fassie once said Umuntu uya changcha ngeke umConfirme (People change. You can’t confirm them).”

He advises people to remain loyal to their friends.

“Loyalty is key guys; it unlocks especially the ones who do the most for you. Don’t Loya (bewitch) them.” 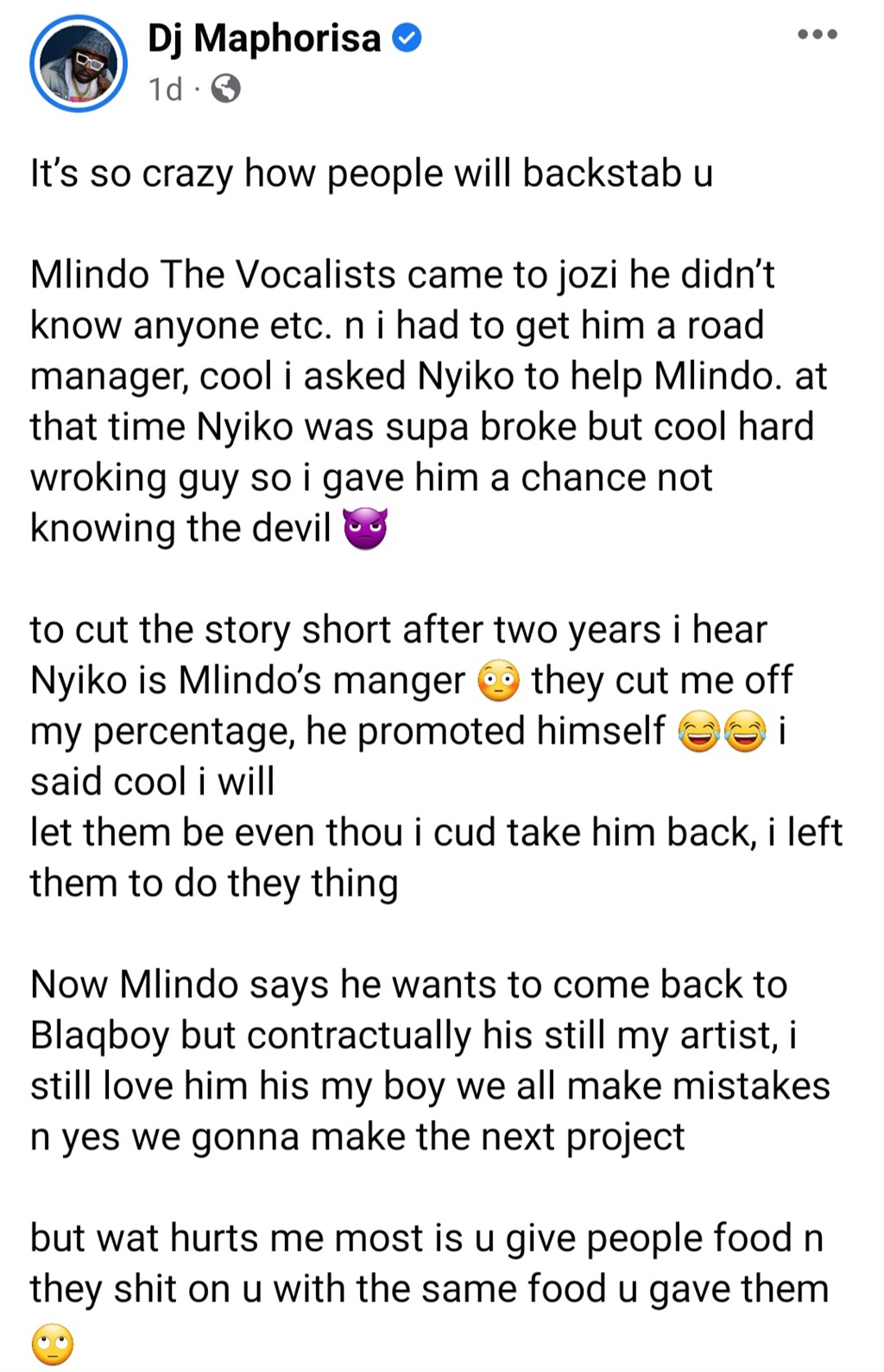 Read more l Siphiwe Mtshali on turning 40, being a husband and father of five and running his own business

In an interview with Drum in 2021, Mlindo said the last two years of his career have been difficult.

“I have spent the last three years in the studio, partly frustrated, making loads of music but not releasing. Then Covid-19 hit but it allowed me to fix my life,” Mlindo says.

In 2019, he got into four car accidents and was involved in an incident where he fell off the stage during a performance. But looking back, Mlindo said he  understands why all those incidents happened to him.

“My life has been a mess because I have been delaying some rituals that needed to be done for my ancestors,” he says.

“My ancestors were trying to get my attention in every way possible. When I was working on my first project; I fasted, prayed, I did not go clubbing unless I had a performance. I made music in one studio and did not use other people’s studios. I limited my alcohol consumption and smoking, and I was in tune with my spirituality. But when the album came out, I became an overnight star and everyone wanted a piece of me and I lost myself,” he told Drum.

Mlindo’s current manager and publicist, Nyiko Bilankulu refused to comment on the allegations made by Maphorisa but allowed his business partner, singer, producer, and Maphorisa’s childhood friend Howard Gomba to respond to the accusations.

When we called Howard, he referred Drum to the comments he'd already written on social media in response to Maphorisa's post.

“First of all I'm not fighting, I'm just curious about certain things. How do u not know who's managing your own artist for two years? Two years Themba. That clearly shows you were and are not interested in your own artist,” Howard says.

“Mlindo wants to come back to Blaqboy? OK, he said to me he doesn't wanna be under you anymore because you're persuading him to do Amapiano, and collaborate with your other Amapiano artists, which he's not comfortable doing, and hence u left him and didn't care about him for two years,” Howards adds.

Howard, who claims to have produced most of the songs on Mlindo’s album, says he wonders whether Mlindo is not being loyal to both him and Maphorisa.

“So, he is not loyal to both of us, he is not telling either side the truth? What happened to caring and looking out for your artists? You appointed Nyiko as Mlindo's road manager, right? Who was Mlindo’s DJ? Who took Mlindo to gigs? Who was managing Mlindo? Who was taking care of Mlindo's family? Who was always encouraging and advising Mlindo about starting businesses? Who was always there when the young man got involved in incidents and accidents? I'm not fighting Themba. I'm just trying to get to the truth because people are blind, but they deserve to know the truth,” he adds.

Referring to money claims made by Maphorisa, Howard says, “I haven't received my percentages in all the work I've done with and for you. Starting with your first album in 2016 titled ‘DJ Maphorisa Dropping my album on my birthday 15 Nov 16’. I'm sure not many people know it. I re-recorded Dj Sbu's VumVum. Ever got paid? Never got credited. Never got credited and paid on so many big songs. I never said anything about it. But I honestly feel you are delusional because even the AmaBlesser album is still pending there at Sony Music. I'm stuck financially because of you. I don't blame you for that. I still love you bro and still wanna work but only if u willing to be open and honest.”

Howard adds that he produced the song Ngempela with Tshegofatso Teffo but was never credited accordingly.

“We laced the production and put it up on his Facebook live, which fans went crazy on. You came and asked me to put on the sweetest taboo progression, which made it sound even better. It's my song and I'm singing in it, though you didn't like my verse. Sjava thought it was too dope. I'm not credited correctly on the song, it says ‘featuring DJ Maphorisa and Howard’, instead of ‘featuring Howard, Coproduced by Dj Maphorisa. All the Amapiano songs I did, I thought we were doing them for me, cos you were telling me that my Afro album isn't relevant, I need a to do a piano project.”

Howard says Maphorisa took his music and gave it away.

“But you took my songs and gave them away with my consent, songs that would have uplifted me. I personally feel that I was a threat. No beef, I made 80% of Emakhaya album, didn't get credited correctly or even got paid for it. Still fighting with Sony to release the money that you don't want to split,” he says.

“I was there for and with you through the dark, but after ko khapile, wang latlha. I made peace and moved on seeking greener pastures. People must know that Nyiko and I sacrificed a lot for Mlindo. For the past two years, he was not getting bookings. Nyiko tried with all his strength to promote and manage Mlindo, your number one, two times bestselling artist in Mzansi. But yet he was not getting any bookings? I went and asked Thuli (Maphorisa’s manager) to open her Instagram DMs and email for me to check if really there's no promoters from Africa trying to book South Africa's number one bestselling artist. How did he get a once-off booking in London and not even a single booking in his own continent? It does not make sense at all; however, you think about it. I'm wondering how you talk about loyalty when you were never loyal to me; the guy who was always there, behind most of your productions? With respect Themba, let's respect other hard work. I felt disrespected when you said to me my chords, input, and music don't mean nothing to you. Sharp I let it slide, because I know I contributed a lot to your music.”

We live in a world where facts and fiction get blurred
In times of uncertainty you need journalism you can trust. For 14 free days, you can have access to a world of in-depth analyses, investigative journalism, top opinions and a range of features. Journalism strengthens democracy. Invest in the future today. Thereafter you will be billed R75 per month. You can cancel anytime and if you cancel within 14 days you won't be billed.
Subscribe to News24
Related Links
Why singer Thapelo Lekoane insists on making timeless music
Winnie Khumalo thrilled about daughter Rethabile's engagement
Rising star | Lungy K finds her own voice after Clash of the Choirs and is now a solo artist
Next on Drum
Real Housewives of Gqeberha make their debut and they are as colourful as advertised