Lasizwe on season 3 of Fake It Till You Make It: “I’m going to show people my true self”

Season 3 of YouTube sensation turned media darling, Lasizwe Dambuza’s hit-reality show is making a return to our screens and the star promises tons of entertainment and emotion for viewers.

The highly anticipated third season, which will feature Lasizwe joined by some familiar and new faces, will premiere on MTV (DStv channel 130) at 21:30 CAT on Monday 03 August.

Read More| Lasizwe on his fallout with Somizi: 'I must say that hit me hard'

DRUM caught up with Lasizwe to find out all about the new season.

Geez! More drama and I’ll be showing you my true self and my life. You’ll be seeing a lot of brand Lasizwe in this season and my personal journey. I’ll be letting you in to my struggle with depression and how I navigate anxiety, handling fame and my personal life, and of course all the fun bits.

2.       Will we be seeing more of your relationship bonds with your loved ones, like we did with your siblings Khanyi and Lungile in the first two seasons?

Yes! There’s a new cast member named Shantel. She’s my older sister and you’ll get to see the shenanigans that happen with her. She recently had a baby and we’ll be bonding over that. My relationship with Lungile will also be on display. You’ll get to see how having an older brother that has a gay younger brother is like.

Even though we still have a long way to go, I’m still trying hard for him to really accept it and I think he’ll really accept that I’m gay once I introduce a boyfriend to him.

The evolution of Lasizwe – how I think, operate and move. You’ll see more brand Lasizwe coming through and get to see me in meetings and my growth thereof. There’s a transition from the child Lasizwe to the more mature Lasizwe.

4.       Did you anticipate that the reality show would get so much love and be renewed for a third season?

I did. It was a vision I had for myself and the show. I also view myself as a Kardashian of some sort because they’ve always managed to keep their show running. I also hope to have season 15 and 20 with different spin-offs and journeys in life.

I’m still on the fence about letting people into my dating life. If you know Lasizwe, you’ll know that I give my all and that in the previous two seasons I’ve shown my private life. In the past seasons, I’ve shown my daddy issues and my different fathers and how I wanted them in my life. But this time around, I pick the personal bits that I want to share with the world. Like with my depression, that I’m willing to show because sometimes people don’t remember that celebrities are human too. We also deal with hardships and I just wat people to relate more to me as a human being.

6.       Other than Shantel, will you be introducing more faces to us in the new season?

Yes, there are. In the promo, I can be seen having lunch with my good friend Norma Gigaba. I don’t want to give out a lot of spoilers, but you’ll see a lot of new faces. You’ll see Mihlali and the behind-the-scenes of our most controversial skit that we made together. Basically, you’ll see a lot of bonding with my siblings.

So, I knew about the movie and the filming, but it happened by pure luck. It happened that I was filming in the same area when I was filming my reality show, so me being the curious Lasizwe, I went to go enquire about what they were shooting and when they told me I told them I’m also very single and they should make a plan. Then I asked for a cameo and on the spot one of the producers said I should be in the club dancing and say a few lines. I did that, they liked it and went with it.

The other cast members and I were so bummed when we found out that the cinemas were closing but then Netflix did the things and now we’re even international. I’m so excited!

That’s one party I’m not attending. I give kudos to actors because it’s so much work. When you’re acting you have to be someone else and when you go out of character it becomes a problem. Sometimes you even carry that character you were playing home. The working hours are also very hectic which is why I salute actors and actresses. I could never work for 16 hours straight.

9.       What other projects are you currently working on?

I’m working on my web series called Living With Afrikaans it’s currently on season 2. It’s a web series about an interracial couple and features my popular character, Nomatriquency. It showcases their relationship; and Nomtriquency literally wanting to secure the land and all the scams and difficulties she encounters.

10.What can fans expect from Lasizwe for the rest of this year?

It’s a surprise! But I had wanted to start my own shoe brand before Covid-19 happened and once it did that idea had to come to a stop. I took that as a sign from God not to venture into that because it could’ve decreased my chances of expanding. 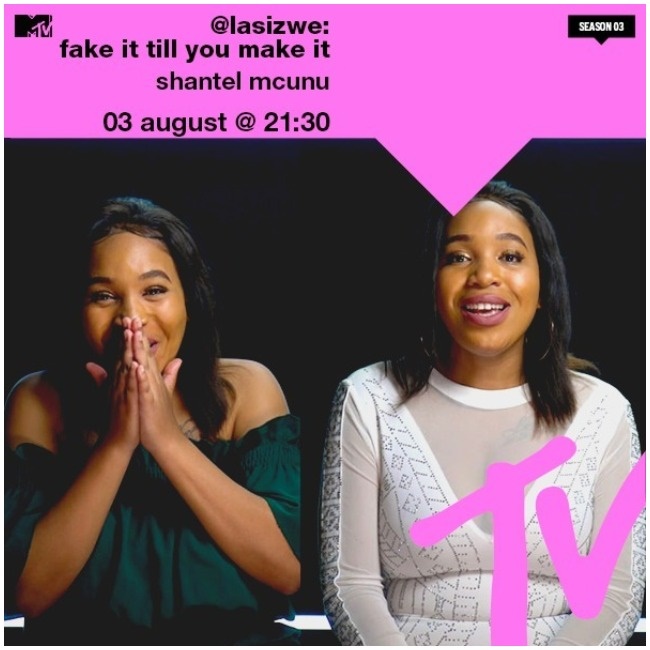 Lasizwe's older sister, Shantel Mcunu is one of the new faces that will be joining his reality show.
Supplied

We live in a world where facts and fiction get blurred
In times of uncertainty you need journalism you can trust. For 14 free days, you can have access to a world of in-depth analyses, investigative journalism, top opinions and a range of features. Journalism strengthens democracy. Invest in the future today. Thereafter you will be billed R75 per month. You can cancel anytime and if you cancel within 14 days you won't be billed.
Subscribe to News24
Related Links
Lasizwe on his fallout with Somizi: 'I must say that hit me hard'
Lasizwe fears for his life after being swarmed by fans: “I’m still human”
Lasizwe reaches 1 million views on YouTube
Next on Drum
'I have learnt from you that success is peace' - Nandi Madida's birthday message to Zakes