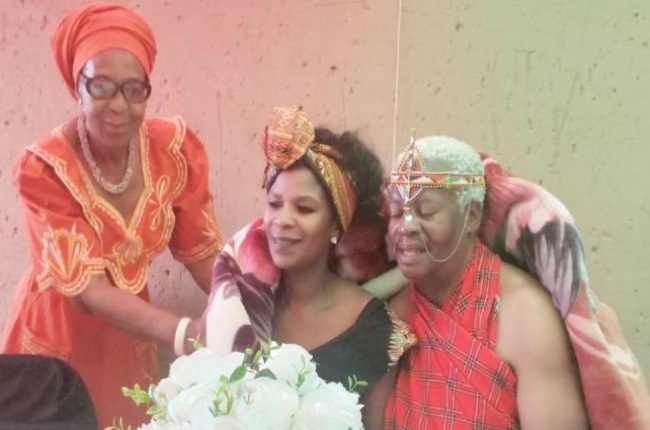 Mamello 'Lami' Mogane, the widow of Trompies star Mjokes, says she got a R400 000 transfer from Kalawa Jazmee.

When she learned that the funds had been finally transferred to the estate account of her late husband, she started preparing for a normal life.

She started looking for a new school for her kids, even though it was already a week after schools reopened. She made arrangements with her landlord to start paying the nine months in rent she owned.

She spent a whole day out on the streets trying to secure a place for her daughter in high school, but when she got home, it came crashing down.

Mamello 'Lami' Mogane, who was married to Trompies star Mjokes, says they got a R400 000 transfer from Kalawa Jazmee. Mjokes died in 2021 in a car accident.

But as it usually works with deceased estates, they now have to wait until all claims have been made and debts paid before they can access the leftover money.

Her lawyer told her on the day the money came in that she can't touch it.

"It must be transferred to a trust account and then they will be divided accordingly. I am more stressed, I spoke to my lawyer and asked if she could give me some funds to pay the rent at least, but she blatantly refused and told me that every amount that comes into the account, even if it is his salary from the time Mjokes passed on until now, it is part of the estate," she tells Drum.

“She then told me that there are outside children, what if they get a lawyer and demand their share of the money? She says this amount is not enough for the death of the deceased, and I told her that this money is part of the payment because Kalawa sold the property in Midrand, and there is a record label deal that they got before the passing of Mjokes, which he also signed. I know what we asked for from Kalawa and we gave them 14 days to hand over all the documents so that we can round off Mjokes’ estate. But now it seems like I am taking a few steps backward,” Lami says.

She now has to again ask for leniency from her landlord and she is prepared for whatever may occur to her and her children at this point.

“I have tried everything, but my efforts are not enough. I am ready to pack my bags and go live in a park somewhere. I have three children, two of who are in varsity. My elder son, Jazmee tried to get to varsity, last year we provided a letter from the lawyers stating why we are not able to pay his fees and they allowed him to study. He gets exceptional marks. I must send out a letter again this year.”

Lami says she will appoint Eugene Mthethwa as her spokesperson because she doesn’t have the emotional capacity to deal with the matter.

Eugene told Drum that they had a meeting with him, Lami, and the lawyer where the lawyer explained that Kalawa needs to send through all the information because when you are winding up an estate, you need to know what the assets are as Mjokes was one of the directors, not just an artist.

“He might have assets more than the amount that was received but that cannot be communicated verbally. Kalawa needs to give the lawyers Mjokes’s share certificate, and list all the assets and their value so that they can calculate how much is supposed to go to Mjokes plus his salary. Lami and the lawyers need to approach the information regulator using the PAIA Act to force Kalawa to provide all the information, including bank statements,” Eugene says.

He says he doesn’t know what the money they have deposited is for. "I thought it was his salary," Eugene tells Drum.

“They need to release all the funds at once because lawfully that is how it is done, everything needs to be listed. We have approached the information regulator to force them to give us the information that is necessary for winding up the estate,” he says.

Kalawa's lawyer, David Feinberg, referred Drum to a statement that was released on 14 January which is available on Kalawa's social media pages and further stated that his client continues to cooperate with the administrator as the estate is wound up.