Nambitha Ben-Mazwi on being featured in Black is King: ‘This was an extension of my purpose’ Being a lover of fashion, Nambitha says her favourite part about being in the international video was the costumes.
Supplied.

The past weekend left many Africans beaming with pride as their screens were graced by their very own artists alongside Beyoncé in the singer’s Black is King visual album and musical film.

One such local actress is Nambitha Ben-Mazwi. Hailing from Port Elizabeth, Lady Nam, as she is popularly known, is no stranger to rubbing shoulders with international stars. She has starred opposite Laurence Fishburne in Madiba and also in the US hit show Black Mirror.

There’s more to this story
Subscribe to News24 and get access to our exclusive journalism and features today.
Subscribe
Already a subscriber? Sign in
Share
Next on Drum
Sannah Mchunu on conquering her challenges and her award-winning role as Zodwa on Gomora 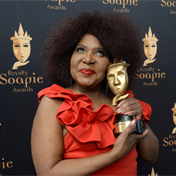