Top-class décor, a glorious face beat, a designer dress, and everything else glamourous summed up Natasha Thahane’s 25th Birthday.

She's on her make up chair getting glammed up for a ‘lit’ birthday celebration when we chat to her.

The excitement in her voice so evident. “There are levels to this thing,” Natasha says.

The star-studded event had performances from the likes of Dr Tumi, Naak Musiq, Zandile Khumalo, DJ Dimplez and Shimza.

“We are celebrating the whole weekend,” Natasha says.

On Saturday, her birthday celebration will be at a restaurant in Vilakazi Street, a short walk away from where her grandfather Archbishop Desmond Tutu lives and then on Sunday it will be at Rockets.

Read more| Natasha Thahane remembers her late grandmother: ‘I never thought I could hurt this much’

She is used to having small celebrations with friends and family but turning 25 on the 25th of September was too special to not go big.

“This party is all about celebrating with family and friends. It has been a tough year for all of us with the pandemic. So, celebrating at such a time is just a blessing. It is important to celebrate yourself. Sometimes we don’t look back at how far we have come,” Natasha says.

It has been a blessed year for her career too. From the girl who rose to fame with her role on SABC 1 drama, Skeem Saam in 2015 to now being the face of Garnier, being on Netflix's Blood & Water and BET Africa's new drama Isono - she has been working hard.

And if she had a magic wand, she would be playing an African Disney Princess, “or Thahane Media would be producing that. I am putting this out to the universe,” she says with enthusiasm.

“I've had to learn patience, we plan but God decides,” she says. Like with her ambassadorship with Garnier, she knew that is where she aspired to be when looking at others who have walked before her, like Connie Ferguson and Zizo Beda. She just had to be patient with the process.

Hard work and sacrifice, she says, are what people tend to leave out when they talk about ‘celebrity life’.

“The biggest misconception being that ‘it comes easy’ when it is a lot of work,” Natasha says. From learning your lines before you go to bed, waking up at 4am to get ready for a 6am call time. Repeating that almost daily.

“It is not always rainbows, there will be time where it gets tough.”

She has also had to learn some real lessons about showbiz the hard way, the biggest one being how she spends money.

Natasha quickly screams out, “financial wisdom” as the first thing she didn’t have when starting out in the industry. Looking back over her life one of the wisest things she has ever done was to go study at the New York Film Academy in 2018.

“Definitely going back to school full-time. I come from a family where I am protected. I had to let life touch me,” she tells DRUM.

Apart from all the glitz and glam, all Natasha prays for is peace.

“I have always prayed for being peaceful like my first name, Ukuthula.” Natasha Thahane at her 25th birthday party.
Supplied Supplied/ Natasha Thahane
We live in a world where facts and fiction get blurred
In times of uncertainty you need journalism you can trust. For only R75 per month, you have access to a world of in-depth analyses, investigative journalism, top opinions and a range of features. Journalism strengthens democracy. Invest in the future today.
Subscribe to News24
Related Links
Blood & Water's Khosi and Natasha tell us what they were like in high school
Natasha Thahane hosts first event under her new company
Natasha Thahane announced as the new SA brand ambassador for Garnier Even & Matte
Next on Drum
Phindy Dube opens up about her life after Idols, motherhood and finding love 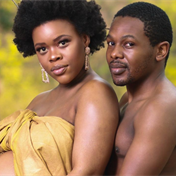