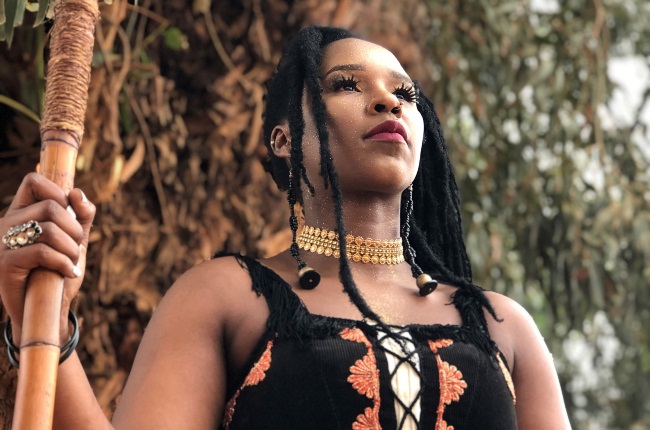 She had just started making her mark. Bookings were coming in, she was sharing the stage with some of SA's legends, then Covid-19 hit and dreams had to put on hold.

Rising star Babalwa Zimbini Makwetu is hoping 2021 will bring blessings now that the long 2020 is ending. Even though she was forced to take a break this year, she decided not to let it derail her from her craft and recently released a song about living through the lockdown period.

She had wonderful plans for this year 2020, but the world started shutting down. Her gigs and tours got cancelled, she almost lost hope. Zimbini felt like she was really working hard but not succeeding, which she details in her music.

She prayed for success and blessings. There's also a lot of self-encouragement in the song. She wanted to motivate everyone affected by Covid-19 and she is praying for rain as a metaphor for success, love and happiness, she says.

She explained that it was important for her to share her experience because it was a way of escaping the frustration. She also used the song to encourage herself to keep moving despite the challenge, hoping that others will also find the courage and to keep praying for the rain to pour with more blessings and success.

She's grateful for the opportunities she's had so far.

“Getting an opportunity to travel the world, sharing the stage with some of the greatest legendary singers such as Thembi Mtshali, Dizu Plaatjies, Nkuli Dube to mention a few. Getting nominated in various awards and recently winning Fleur Du Cap Theatre Awards 2019 as a Best Sound Design, Original Music, Soundscape or Live Performance. Sharing my music with the world, have all been my career highlights and there’s still many more to come,” she says.

She was born and raised in the Eastern Cape, Cofimvaba. Before Covid-19, she was excited about her record label deal with Elvis Sibeko Studio Records and getting ready to release her album titled Ndiyehlela.

But that had to be put on hold. She's ready to start again though, she says.

Zimbini grew up in a musical family and she was exposed to different genres of music at a very young age. She was brought up in a Christian home and was always a lead singer at church.

She enjoyed listening to kwaito, house, RnB, these were mostly played (loudly) in the tavern in her village. Her neighbors loved traditional ceremonies and because her family didn't believe in them, she wasn't allowed to attend. But she would secretly go and that’s where she learned the traditional songs and fell more in love with African music.

“When I was still in junior secondary school I would jump up whenever there was an event. I would always do solo performances, I think it’s where I got the confidence to stand in front of people outside church. I was always fascinated with sound, every time my dad started his car, the engine sound would strike a certain melody to me and I would start teaching some of my siblings and friends,” she tells Drum.

The artist recalls remixing Mafikizo, Brenda Fassie, Lebo Mathosa to mention a few and she would do little performances in the evening when her family was gathered in the dining room. She was only interested in games that were musically inclined such as ‘Byshoza’ and that was her favourite, She would even forget the game sequence because she’s so focused on harmonizing.

In 2008 she joined Future Line Arts Academy, then after Matric she did her performance studies at Magnet Theater. In 2012 she became part of a spoken word movement called Lingua Franca as a lead vocalist, the same year she was promoted to be a musical director.

“It was music and poetry collaboration and I was more active on the musical side. I was selected as a musical director and a lead singer," she recalls.

From then she started writing/creating songs for the movement and they performed in different festivals across the country. Then she started writing songs for herself and did her own solo shows/concerts. The artist then started designing soundscapes/original music for theatre productions around Cape Town and she also directs music for theatre productions as well as performs in some of them.

Zimbini will now release her album in 2021, she says. "It will be like a book and everyone can find a chapter that they can relate to."

We live in a world where facts and fiction get blurred
In times of uncertainty you need journalism you can trust. For 14 free days, you can have access to a world of in-depth analyses, investigative journalism, top opinions and a range of features. Journalism strengthens democracy. Invest in the future today. Thereafter you will be billed R75 per month. You can cancel anytime and if you cancel within 14 days you won't be billed.
Subscribe to News24
Related Links
Rising star Anele Zondo on her journey to becoming: "I was born to be a star"
Rising star Zanele Potelwa on 5FM, Selimathunzi and going after what you want
Rising star | Getting to know Durban singer Azana
Next on Drum
Actress Connie launches the Ferguson Foundation a year after Shona’s passing