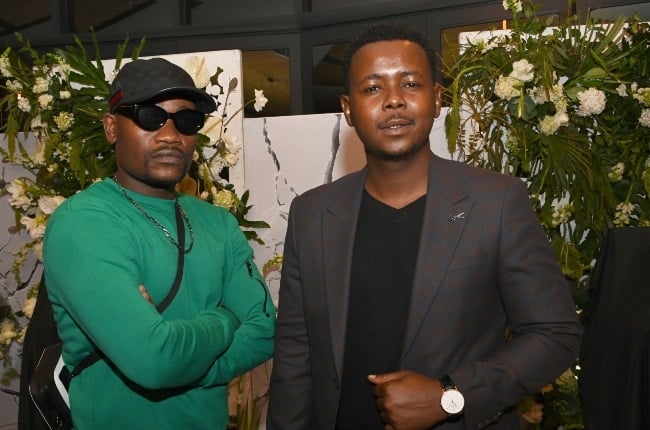 Clement Maosa and Cornet Mamabolo who recently came back to TV with a new role on The River.
Oupa Bopape

He took a break from the spotlight to focus on his insurance business when he left the popular telenovela Skeem Saam on SABC 1 last year.

But something was missing. The break left a void he couldn’t fill. He missed doing what he loves doing the most - acting.

Thabiso Cornet Mamabolo is back on television and this time, he enters the limelight on 1Magic drama series, The River as Lerumo.

This character is a challenging one for Thabiso. He tells us who he is on the show.

“He is a half-brother to Khabzela [played by Thabiso Segohadi]. They share the same father but have different mothers. He’s from a village called Lebowakgomo and was raised by his grandmother because his mother was really never there for him.”

“He comes from a very tough background, and got arrested at the age of 19, and then spent six years in prison because of a rape case. He was framed after the lady he dated was caught cheating by her husband and Lerumo didn’t know she was married, and because the lady didn’t want to admit to cheating, she lied and said Lerumo raped her,” Thabiso shares.

This kind of role is new to him. “So I had to do a bit of research on serial killers from documentaries and eventually I managed to get a grip of it. I think also trying to have fun with it has also allowed me to bring the character to life.” Thabiso says when he made his first comeback on set after his break, it was not as easy as he imaged.

“It was tough but the cast made it easy, they are experienced and accommodative, the directors also managed to bring me into the world of the show and the relationship dynamics of the characters that has already been established.”

He says his character on The River won't be around for too long. “It is just for a short while.”

Is the duration of the character the reason he said yes to coming back to acting?

He takes a deep breath before giggling and says, “when I received the character brief, the demon in me woke up, you know the love of acting evoked".

He says he was focused on his insurance business because he wanted to stabilize it. “Because the demand was high and the clientele was going, so I needed to make sure that it is stable on the branches and that is exactly what I have done, hence there is this opportunity for me to do this short role.”

What did he miss the most about being on set?

“I have learned that the passion for this is really keeping me sane in business, because naturally I am an artist as much as I am an entrepreneur.

“Then having to do it again and differently this time, I realised there was a void, which just automatically filled when I got onset.”

We live in a world where facts and fiction get blurred
In times of uncertainty you need journalism you can trust. For 14 free days, you can have access to a world of in-depth analyses, investigative journalism, top opinions and a range of features. Journalism strengthens democracy. Invest in the future today. Thereafter you will be billed R75 per month. You can cancel anytime and if you cancel within 14 days you won't be billed.
Subscribe to News24
Related Links
From Umlazi to the world – actress Slindile Nodangala on Nolwazi, Mam Ruby and industry longevity
Telenovela The River to lose three stars as Hlomla Dandala, Lawrence Maleka and Tango Ncetezo exit
Is it time to stop treating open marriages like they’re weird? South African experts weigh in
Next on Drum
Nomcebo Zikode feels like a winner already as she heads to the Grammy awards