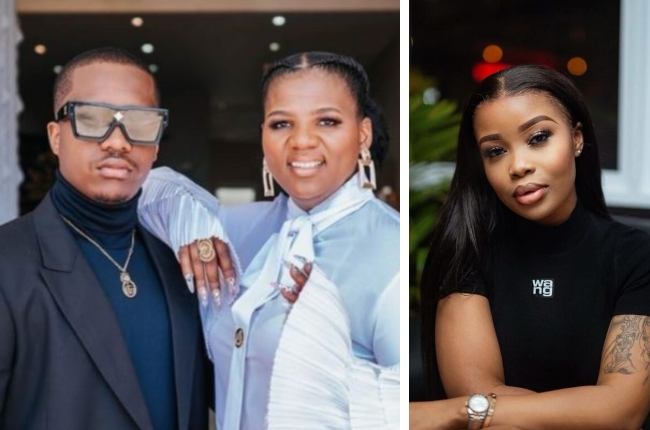 Mamkhize says given the nature of the allegations made by Sithelo Shozi, the matter has been referred to her legal team.
Supplied

This is after the mother of her grandchildren Sithelo Shozi (28) made abuse allegations against her son and Royal AM chairman Andile Mpisane.

The DJ, businesswoman, and influencer revealed why she and Andile separated and how the Gqom artist got married to Tamia Louw Mpisane three months after she gave birth.

Sithelo is known for keeping her private life a secret, but during a question and answer session on her social media, she decided to speak up.

In several Instagram stories which have since been deleted, Sithelo accused the father of her two children - Florence “Flo” and Likuwe “Coco” Mpisane of being abusive.

"I’m not one to speak out about anything concerning my private life, more especially where my kids are involved. But everyone has a breaking point, and this narrative has gone too far. I’ve been silent for far too long and hid my truth for the sake of peace but today I will not be silenced,” she wrote.

Read more l ‘Why can’t I just be left alone in peace?” – SK Khoza on the graphic video

Sithelo shared how Andile left her just after their baby was born and married Tamia Louw. She said she had endured abuse.

“You all mocked me and made ridicule of me when I was left with a three-month-old child, but little did you know that was my break free from endless pain. That was God saving me from eventually taking my own life. Nothing has been more liberating. I saw God’s hand in my most vulnerable place.”

She made allegations that she had a miscarriage due to the physical violence and showed proof of psychologist visits.

She then shared pictures of bruises on her face, lip, and a damaged cell phone she alleges Andile was responsible for breaking.

“Should I speak about the beatings I’d get every week or month followed by a bunch of flowers, so I’d never speak out?”

In a statement, Andile’s mother Mamkhize said she was unaware of the alleged abuse despite Sithelo having said that it happened in full view of the family.

“I have been made aware of allegations made against my son, Andile Mpisane by Sithole Shozi on her Instagram account,” the statement reads.

“I do not take lightly these accusations given my history and strong stance against gender-based violence. I do not and will never condone violence in any form or nature.”

Mamkhize says she in no way tolerates gender-based violence and her family was unaware of the alleged abuse.

“I would like to categorically state that neither myself nor my family have been witness to any alleged abuse. These allegations are false and defamatory.”  She goes on to say that they will be seeking legal advice on the matter.

“Given the nature, severity, and extent of these allegations, the matter has been referred to our legal team. It’s of the utmost importance that the law takes its course,” she says.

“Furthermore, false accusations do tremendous damage to victims of actual assaults and or abuse. As we all know there are always two sides to a story. I will not be making any further statements with regards to this matter.”

We live in a world where facts and fiction get blurred
In times of uncertainty you need journalism you can trust. For 14 free days, you can have access to a world of in-depth analyses, investigative journalism, top opinions and a range of features. Journalism strengthens democracy. Invest in the future today. Thereafter you will be billed R75 per month. You can cancel anytime and if you cancel within 14 days you won't be billed.
Subscribe to News24
Related Links
‘That family did not love Senzo. He was a cash cow’ – Kelly goes for jugular in new season of her...
Berita, Enyobeni owner’s wife Vuyokazi – it all shows how patriarchy teaches women to cover their...
‘Every time I sing that song, I am reminded of her’ - Singer Zuko Kupiso opens up about Nwabisa...
Next on Drum
Gone but not forgotten – Killer Kau, Mpura and artists who died alongside them honoured a year later