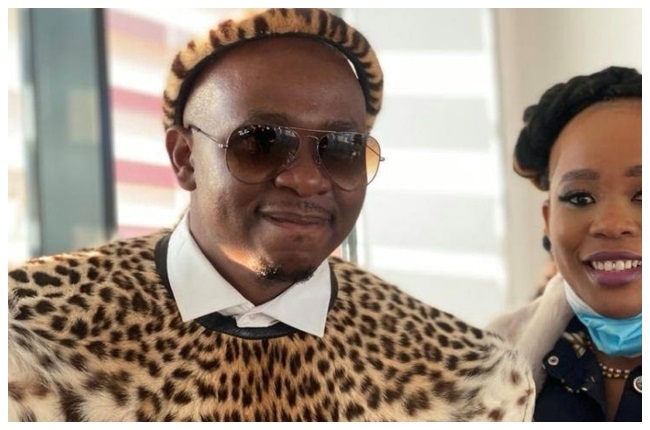 SA was introduced to the lovebirds in the second season of hit reality show Izangoma Zodumo, the Mzansi Magic show that captures the day-to-day lives of gobelas and their initiates, and soon the Durban duo was trending on social media.

But Sabelo and Pearl Sifundza describe themselves as just "clean and pure traditional healers" who follow their ancestor guides but also, put God first in everything that they do.

In a chat with Drum, Mkhulu Sabelo and his wife, who is also spiritually gifted, talk about their journey as a couple navigating marriage while honouring their spiritual callings and address the admiration and backlashes from Twitter users about why they chose to not show some things on camera.

Mkhulu Sabelo has been a healer all his life, he started having a calling at the tender age of one and started healing people where he was a mere five-year-old boy.

He tells us, when he explains his journey, he always wants to make it clear to people because there is no other traditional healer like him.

His wife, Pearl, is a professional who followed her calling of becoming a healer after she met her husband.

Read more | Couple Pearl and Sabelo Sifundza join season two of Izangoma Zodumo: ‘We are ready for the critics’

“I always ensure that I explain who we are because we are not like other traditional healers. We are healers who work with and without muthi, we give muthi power because we are powerful beyond measure. I say this not because I am gloating but because I kept my ancestors clean and pure by not participating in witchcraft,” says Mkhulu Sabelo.

He has never gone to someone’s house to be initiated but his journey of ukuthwasa came straight from his ancestors because healing people is all he knew, he tells Drum. He says he was brought into this world to heal people, and that is why he takes pride in his gift and his ancestors because he is a chief healer. He didn’t attend sangoma school or "normal school" because he always focused on growing as a traditional, he adds.

“I spent a lot of time focusing on my gift. I have a lot of respect for my ancestors because they use me as a medium to heal that is why I always mention the importance of being a traditional healer that heals truthfully. Remember the ancestors are God’s children that is why we are scared of God and when in our practice God comes first as our maker so we need to always involve him in our work.”

They are one of those couples who finish each other’s sentences. They met when Mkhulu Sabelo was a 19-years-old, been married for nine years and share two beautiful girls.

Pearl giggles when she talks about the first time she met her husband. She says their ancestors brought them together like a magnet. “I met Mkhulu when he was a traditional healer and was already healing people. I was a nurse who had a calling but didn’t do much about it until I met Mkhulu.

"I always knew I was special because even before I assist patients I would pray for them before they go see the doctor. I believe that our ancestors knew that we were meant to be together because they brought us together so that my own gift can flourish. It was after I met him that my gift flourished and enhanced the healing touch that I knew I always had,” she says.

Pearl says when they were still dating they had the same dreams and that solidified their bond because they are in tune even in the spiritual realm. She says their relationship is beyond their control because they are led by their ancestors.

It was their first time appearing on a TV series that focuses on who they are spiritually and they loved every minute of it. They chose to do it to show people that they are living a normal life, thy explain.

In response to the criticism they often got for not always showing how they helped their initiates, Mkhulu Sabelo says: “On TV we shared what we shared and kept other things off the camera because they are not ours to share. One thing people need to remember is that uKhuthwasa is not a group assignment where you will get marks at the end. You have to respect someone else’s ancestors because that aspect of their lives should remain sacred. We showed everything that concern me and my wife and we showed it truthfully. We were the ones who wanted to appear on TV and not our initiates.”

They both said it was a great experience to share their gift with Mzansi and they will let their ancestors show them their next move, until then they will continue healing and helping people.