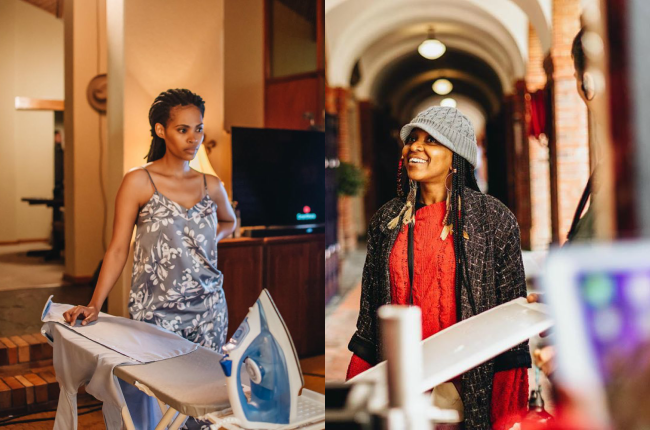 Film director Nosipho Dumisa brought the second South African original Netflix series to life in Blood & Water, and it has been a favourite on the streaming platform since its premiere.

Speaking to DRUM Magazine about the creation of Blood & Water, Gail Mabalane acknowledged that having Nosipho as a director enhanced her acting when executing her role as Thandeka Khumalo.

“She trusts us enough to be able to bring the characters to life and she’s also there to guide us when she knows it can be done better,” she told us.

Gail plays a supporting lead actress as the mother to Puleng (played by Ama Qamata).

I love Thandeka’s character, she reminds me a little about my mom because she is relatively liberal.
Gail Mabalane

Thandeka has a daughter who was abducted at birth and she spends 17 years grappling with coming to terms with her disappearance and her husband stands accused of having a hand in her firstborn daughter’s disappearance.

“I played a mother of three which is something I haven’t done before and I played a mother to a teenager it was exciting knowing that one day my daughter will become a teenager. I was taking notes more than anything to be better prepared for when my children will come to that stage,” Gail said.

“I love Thandeka’s character, she reminds me a little about my mom because she is relatively liberal. She allows her daughter to get away with things we weren’t allowed to get away with as black kids, she allows her daughter to express and I think that’s what most teenagers do, they want to be heard. It was an exciting time I loved playing Thandeka”.

Nosipho has directed a South African crime thriller titled Nommer 37 before, and she expressed how directing Blood &Water was a different experience for her.

“I am always willing to tell different type of stories, I love genre therefore everything I do, I’m looking for it to have something to say. Looking at the young adult world my approach was to try and be authentic to the experiences. I love working with actors and I think it’s because in my head I am an actor,” Nosipho said.

Gail Mabalane and film director Nosipho Dumisa speak to us about the making of Blood & Water.

We live in a world where facts and fiction get blurred
In times of uncertainty you need journalism you can trust. For 14 free days, you can have access to a world of in-depth analyses, investigative journalism, top opinions and a range of features. Journalism strengthens democracy. Invest in the future today. Thereafter you will be billed R75 per month. You can cancel anytime and if you cancel within 14 days you won't be billed.
Subscribe to News24
Related Links
Amamkele Qamata shot to fame in Mzansi Magic’s Gomora – now her new Netflix series is set to take...
Rapper Nasty C makes his acting debut in Netflix’s 'Blood & Water'
Blood & Water actors Ama Qamata and Cindy Mahlangu on their friendship, steamy scenes and success
Next on Drum
PICS | Inside Stephanie Ndlovu's baby shower – ‘It was difficult to surprise me’