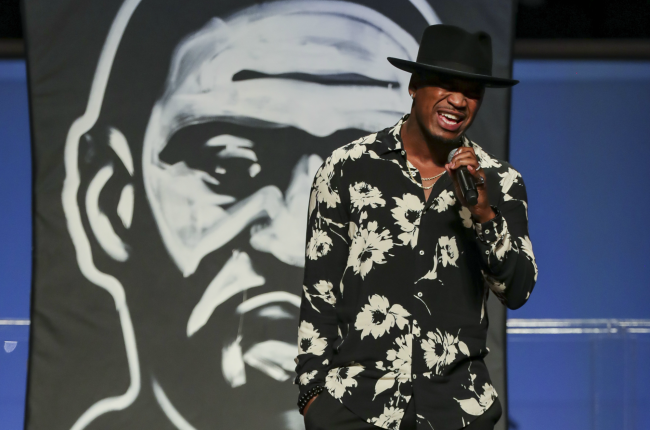 Singer Ne-Yo performs a song during the funeral for George Floyd.
Godofredo A. Vásquez - Pool/Getty Images

On Tuesday, singer and songwriter Ne-Yo fought back tears as he paid tribute at George Floyd’s funeral service.

The memorial – which was held at the Fountain of Praise Church in George’s hometown of Houston, Texas – was also graced by the likes of Jamie Foxx, Channing Tatum, T.I. and many other Hollywood stars.

According to PEOPLE, the memorial lasted two hours and the attendance was limited to 500 family members and guests due to the global Covid-19 crisis.

The singer broke down twice as he performed an emotional version of Boyz II Men's It's So Hard to Say Goodbye to Yesterday. He paid tribute to George for "changing the world".

"I would like to personally thank George Floyd for his sacrifice, so that my kids could be all right later on. I appreciate the sacrifice. I genuinely do.”

The Good Man singer went on to give words of comfort to George’s family and friends.

“To George's family and friends, Jill and I know the deep hole in your hearts when you bury a piece of your soul deep in this earth. As I said to you privately, we know you will never feel again,” he said.

"To George's children and grandchild, I know you miss your dad and granddad. To Gianna, as I said to you when I saw you yesterday, you're so brave, daddy's looking down and he's so proud of you . . . I know you have a lot of questions, honey. No child should have to ask the question that too many black children have had to ask: ‘Why? Why is daddy gone?’”

The 40-year-old hitmaker also emphasised that this was the time for racial justice and that once there is justice for George Floyd, America will be a step closer to ensuring black lives really do matter.

George,– who grew up in Houston, allegedly died at the hands of a police officer, who has since been arrested.

We live in a world where facts and fiction get blurred
In times of uncertainty you need journalism you can trust. For 14 free days, you can have access to a world of in-depth analyses, investigative journalism, top opinions and a range of features. Journalism strengthens democracy. Invest in the future today. Thereafter you will be billed R75 per month. You can cancel anytime and if you cancel within 14 days you won't be billed.
Subscribe to News24
Related Links
Serena Williams refutes rumours that she forced her husband Alexis Ohanian to resign from his...
Doja Cat issues apology over ‘racist’ comments: “Half of my family is black from South Africa”
Next on Drum
‘She was powerful, black, unapologetic’ – Siv Ngesi dedicates his role on The Woman King to late mom