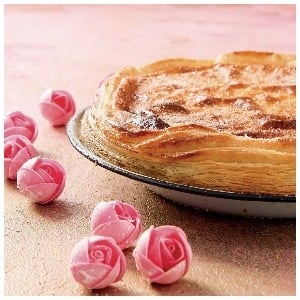 1 Divide the flour into three equal parts and the butter into four parts.

2 Use a food processor and pulse together one part flour with one part butter until it resembles coarse breadcrumbs.

3 Repeat with the remaining two parts flour and two parts of the butter.

4 Bring it all together in a mixing bowl.

5 Beat the egg yolks, lemon juice and iced water into a froth.

6 Cut this mixture into the dough using a knife.

7 Flatten the dough into a disc, cover with plastic wrap and refrigerate for a good few hours.

8 Divide the dough in half and roll each out into a rectangle.

9 Mix the cream of tartar into the remaining part of butter. Using a butter knife, spread a thin layer over two-thirds of each piece of dough. Fold the unbuttered part over half of the buttered section, then fold over the last part. Fold the dough again in three parts. Cover and refrigerate for at least 30 minutes. Roll out. Fold into three parts again. Cover and refrigerate for 30 minutes. Roll out. Repeat five times.

10 Finally, roll the dough out thinly and line enamel plates. Lift the dough on the sides so that it falls gently into the corners. Cut a ring of pastry as large as the edge of the plates. Brush the edge lightly with water and lay this pastry ring on top. Press lightly so that it sticks to the bottom part.

11 Freeze one crust until needed.

1  In a saucepan set over moderate heat, combine 750 ml (3 cups) of the milk, the peach leaves or almond essence and the cinnamon stick. Bring to a boil, and then remove the leaves and cinnamon.

2 Beat the egg whites to a stiff peak. Set aside.

4 While whisking, add a little hot milk to the mixture.

5 Reduce the heat and continue whisking until the mixture boils and starts to thicken.

6 Stir in the butter and vanilla essence.

7 Remove from the heat and gently fold in the egg whites.

8 Scoop the custard into the prepared crust and bake for 8 minutes. Lower the oven temperature to 220 °C and bake for a further 4-5 minutes or until the filling has risen and the pastry is cooked and golden.

9 If it looks as if the custard and crust is colouring too quickly, lay a baking tray onto the oven rack above the tart. To finish, dust with cinnamon.

We live in a world where facts and fiction get blurred
In times of uncertainty you need journalism you can trust. For 14 free days, you can have access to a world of in-depth analyses, investigative journalism, top opinions and a range of features. Journalism strengthens democracy. Invest in the future today. Thereafter you will be billed R75 per month. You can cancel anytime and if you cancel within 14 days you won't be billed.
Subscribe to News24
Next on Drum
Stout chocolate cake and ice cream