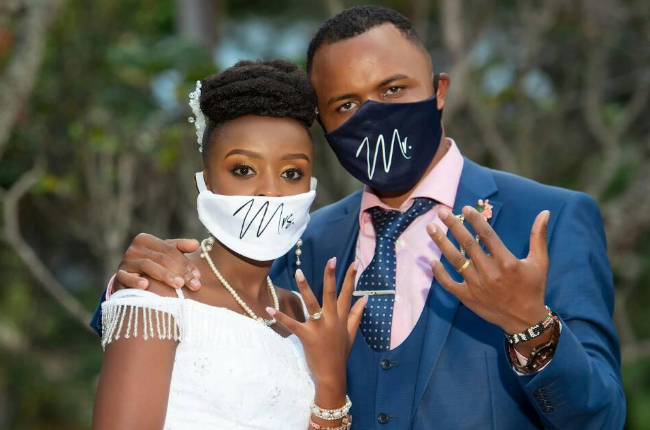 Pictures from their wedding are going viral on social media and have left many wondering why Kenyan couple Justus and Grace Ngari decided to go ahead with their nuptials amid the spread of the coronavirus and current lockdown.

Justus, who now lives in Durban, tells DRUM they had to cut down on a lot to make their wedding government-compliant in Kenya.

“We had planned quite a big event, our wedding was supposed to have 2 500 guests whom we had already approached. The bridal team would have comprised of eight guys and eight ladies, but we reduced them to have only the best man and maid of honour,” Justus says.

He adds that the wedding, which took place on 9 May, was originally planned for 25 April. “But because of the coronavirus issue we had to postpone.” Justus says due to closure of government offices they could only get clearance to proceed with their wedding from the registrar of marriages at a later stage.

“We also had booked our venue at Alliance Boys High School where the reception was to be held but because of the pandemic, we had to forfeit. For the rest of our friends and family, we streamed the day live on online platforms so they could join us that way,” he tells DRUM.

When asked why they opted to proceed with the wedding instead of cancelling, Justus says they decided to take a “bold step”.

“This pandemic is unpredictable, so we decided to take the bold step. The marriage is between the couple, the best man and maid of honour who are the witnesses and the priest, we had already obtained clearance from the registrar of marriages, which was expiring on 17 May. So we prayed about it and God made a way.”

To spice things up, the couple incorporated a Covid-19 theme into their wedding.“The whole experience was awesome, especially spicing [up] our wedding with the Covid-19 theme –  we shall never forget the face masks, our wedding was not so populated and also the photos of our friends which we put on the seats,” he says.

He says although they had to sacrifice many luxuries for their big day, they kept the important bits.

“At least parents of both bride and groom witnessed this great day and were very excited and my wife got to be walked down the aisle by her parents,” he says. The wedding venue of Justus and Grace Ngari (PHOTO: Supplied)

Although they forfeited money they’d paid for the big wedding, Justus and Grace still saved some cash.

“We have saved a lot since we reduced the numbers. The food we had [been] prepared to pay for and the sitting arrangements all changed abruptly. We also had a very big reception venue. So everything changed and we thank all friends who helped us meet our targets,” he says.

But the couple has no regrets.

“It was a nice wedding, not tiring. Given an opportunity to choose, I would still go for that. Sometimes we felt low, but our family members kept cheering us. So far we are happy and our day was very colourful, though we really wanted a big wedding so that we could dance and celebrate.  This is the only big celebration you do when you are alive so we also feel we never met our expectations in terms of a bigger wedding,” he says.

The newlyweds met back in 2017 when they boarded the same minibus after work. They exchanged numbers and although nothing happened immediately, they reconnected after some time and the rest is history. 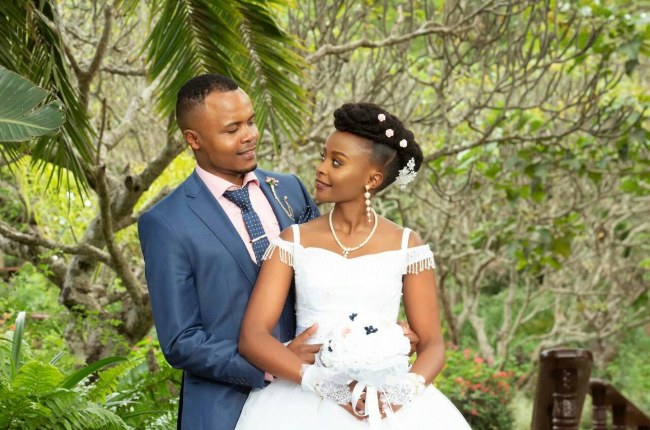 Just like in South Africa, gatherings in Kenya are prohibited by the government as part of its lockdown regulations.Since the beginning of April, a night-time curfew has been implemented and public and social gatherings are banned. People have been encouraged to stay at home with all schools and religious centres shut. It is compulsory for people to wear masks in public spaces and the resumption of restaurants operations is the only easing of the rules during the lockdown.