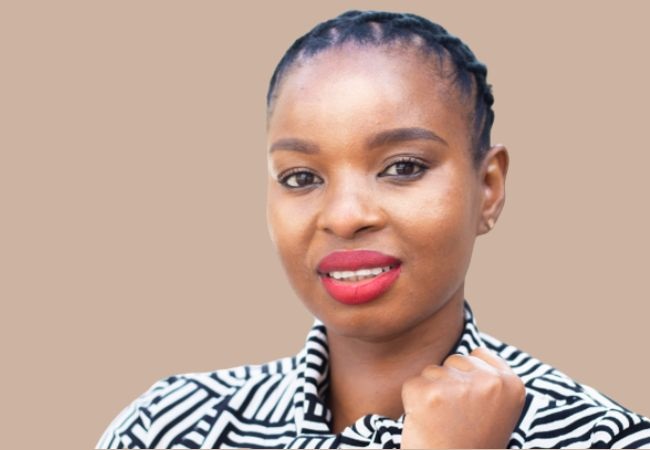 A major champion for women empowerment, Senamile Masango would like to see more South Africans, including herself, graduating with PhDs.

She is a mover and shaker whose mission is crystal clear as an expert in a male-dominated field: SA needs more female nuclear scientists.

It’s why the Nongoma-born and bred philanthropist started the Senamile Masango Foundation – to support other African women who also, like her, dream of solving the mysteries of matter and the universe.

“I’m a big dreamer,” says the doctoral student and businesswoman.

“I’m one of those people abahlezi behlekwa (always being laughed at) because they dream big things,” she says with a chuckle.

But she’s only living up to her second name, Khethekile (‘one who is distinct’ or ‘set apart’), which she relates to more than her first name, Senamile (‘we are joyful’).

Certainly, her tendency to imagine what seems impossible to achieve has landed her in high places. For instance, among her many accomplishments, she became the first African woman to form part of an African-led team conducting experiments at the CERN, where the Higgs-Boson was discovered, when she was a master’s student at the University of the Western Cape (UWC).

But the 35-year-old hasn’t always found it easy to dream.

The year that she made the decision to go back to school full-time and pursue her master’s was the same year that her seven-year-old child died in a car accident.

Reflecting on 2016, Senamile says it was the year she lost everything and had to go back to square one as a woman in her early 30s studying with young people in their early 20s.

“I had to be one of the ama2000,” she jokes, before adding it was the best decision she could have made. She’d just lost her job, was mourning the death of her child and had recently relocated to a new city.

It was a tough period that tested the limits of her resilience and her faith.

“I’m so proud of myself,” she admits. “I am one of those people who lost everything. I’m sharing this because there are many women who are afraid to start over.

“Don’t be ashamed. Move to a place where nobody knows you and start over again. Look where I am now?”

On 29 August, her NGO, the Senamile Masongo Foundation, will be hosting a Women in Energy Conference in Johannesburg where experts will exchange ideas on how SA can overcome its energy challenges. The keynote speaker will be Deputy Minister of Mineral Resources and Energy Dr Nobuhle Nkabane.

These are the kinds of discussions the experienced public speaker is determined more women should take the lead in.

She recalls preparing for this kind of platform she now has as a young leader in energy, saying she’d practise these moments as a child in front of her mirror.

Now she has addressed presidents, including Cyril Ramaphosa, the former SA President Jacob Zuma and former President of Ghana, John Mahama, as well as the late King Goodwill Zwelithini whom she refers to as her Uncle.

The UWC graduate is also a proud University of Zululand (UniZulu) alumnus and she says she aims for the sky not just for herself, but for young people studying at Ongoye who also have hopes to one day do research at CERN or become leaders in energy. It’s her wish to give back to the university where she obtained her bachelor of science by one day investing in resources that can make teaching the sciences a little easier for lecturers there.

“I think it was three weeks ago that I was with UniZulu students, encouraging them, motivating them because most of the students studying at Ongoye come from disadvantaged backgrounds.

“What I’d love to do for Ongoye is support them with resources, especially within their science department – they don’t have much resources. I’m sure they still use the apparatuses that were there when I was a student there. So I would love to raise money for them.”

Senamile was just 16 years old when she enrolled as a student in 2004 at her alma mater in Empangeni.

“It felt like freedom,” she says, recalling how she enjoyed the liberation of no longer living at home, a strict household which she shared with many siblings as the youngest child of a polygamist.

She made some mistakes, as most young people do, she admits, having to retake some exams and then falling pregnant while still trying to complete her undergrad studies. Subsequently, the scientist who says her mother is a royal princess who can trace her relation to King Goodwill Zwelithini back to King Mpande, decided to be a school teacher.

“I’m not a very good teacher, though,” she admits, so she didn’t stay in that noble vocation for very long because she knew her destiny was in doing what she does now: energy leadership.

Fate, faith and destiny are words the scientist uses with no sense of irony because she believes science confirms her faith in God or Umvelinqangi as one who is chosen – Khethekile.

“As a nuclear scientist who studies the universe, it’s so true that everything happens up there before it happens in this realm,” she says.

“The reason we as humans invest billions in studying what’s happening in the universe is because what’s happening out there can give us answers about here. So at the end of the day, all of us, we are not from here.

“We are all spiritual beings as science has proven, especially the nuclear science that I am studying. We are all energy.”

“For me science reveals Umvelinqangi. Everything connects so beautifully.”