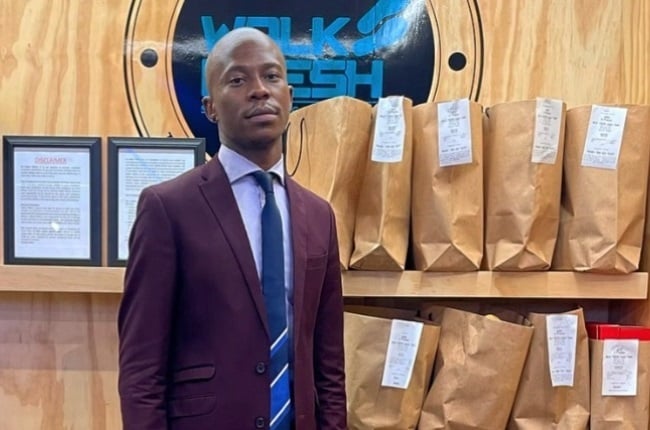 Lethabo Mokoena is on a mission to grow the township economy.
Instagram/@lethab_ofresh

His couches, Diesel jeans and Jordans.

Nothing was off limits for Lethabo Mokoena on his way to making his sneaker cleaning business a success, not even the sale of some of his favourite items.

He chats to Drum as he is making his way to the mall and says it was hard for him to return home to Daveyton and find so many of his childhood friends unemployed. He had been away studying towards a BA Corporate Communications degree at the University of Johannesburg.

“I was uncomfortable with the fact that because I had graduated and I was working, suddenly people I grew up with, who were my friends, wanted to refer to me at ‘grootman’ and them constantly asking for money. And it was not because they were not smart people, but there is just a lack of opportunities.”

One day, on his way back from work one day, he saw one of those friends cleaning his sneakers and asked if would consider cleaning sneakers for money and he agreed. And so Walk Fresh was born.

Read more | He decided he'd buy a new property every single year, and now the investor is in the big leagues

Within a week, they had cleaned about 50 pairs of sneakers. He employed four of his friends and continued working while he paid their salaries from his salary working in corporate.

“I even sold my couches, Diesel jeans and Jordans so that I could pay salaries.”

As time went on, he got a bank loan to fund his business as it grew, and they were averaging between 100 and 150 pairs a month. He was picking up sneakers from as far as Parkhurst, having them cleaned in Daveyton and returning them. Or they would do house calls for clients with more than 15 sneakers to clean.

He says there are clients who have well more than 150 pairs sneakers.

“There are even people who buy sneakers, wear them until they are dirty and buy the same sneakers again because they like them so much but they do not know how to clean them.”

Within two years of starting the business, Lethabo quit his day job and focused on the side hustle that was quickly becoming his main.

Some of the challenges he faced included gaining the trust of his customers.

“Look, we were not exempt from any challenges that are experienced by start up companies. But we also had the added responsibility of pushing and promoting township entrepreneurship. People liked the idea, and the great branding but the township address made them doubt us.

“So we wanted to make sure that people knew they could trust us because some were worried what would happen if damaged their sneakers or we disappeared with them and those were fears that came with us being a township business.”

They had cash flow issues, as well as the access to the market and Lethabo says they had to create their own market.

In 2017, through an innovation hub, they were able to open a store Daveyton because all the while they had been operating from one of his friend’s back room.

“It was great then to even have something like working hours because people were no longer able to call about getting their sneakers during Generations.”

In 2017, Lethabo says started manufacturing his own shampoo as well and now they are selling their own products.

In his last two years of varsity, Lethabo was already working three jobs which allowed him to pay for his own fees and afford a car. So convincing his parents about his new career path was not difficult at all.

Read more | She bought 3 Soweto stands with a few shacks. This is how investor Nomakhosi Makolota developed them

“They trusted me and were completely supportive. The only issue was my mom explaining to her friends in the community why her son who is a graduate and had a job was suddenly cleaning sneakers. Otherwise, me and her were cool, it was her peers who could not understand,” he chuckles.

Now as a fully fledged businessman, he encourages young entrepreneurs to not over think things when they have ideas.

“The important thing is to start. And you must anticipate failure, because what I am seeing is that we do not want to fail, whereas if you do not fail you cannot really grow.”

His mission now is to commercialize his business and they even have a programme where they teach young people in the townships how to clean sneakers.

“More than anything else, I want to hand over to the younger ones that are still coming up and hold their hands throughout this journey. I want to take sneaker cleaning to the next level. The business must be scalable and sustainable.”

Two of the friends he employed when he started the business are still with him and now he has a staff complement of 15.

We live in a world where facts and fiction get blurred
In times of uncertainty you need journalism you can trust. For 14 free days, you can have access to a world of in-depth analyses, investigative journalism, top opinions and a range of features. Journalism strengthens democracy. Invest in the future today. Thereafter you will be billed R75 per month. You can cancel anytime and if you cancel within 14 days you won't be billed.
Subscribe to News24
Next on Drum
From father to son, 1 hectare to 30, farming is in the genes for this Limpopo family