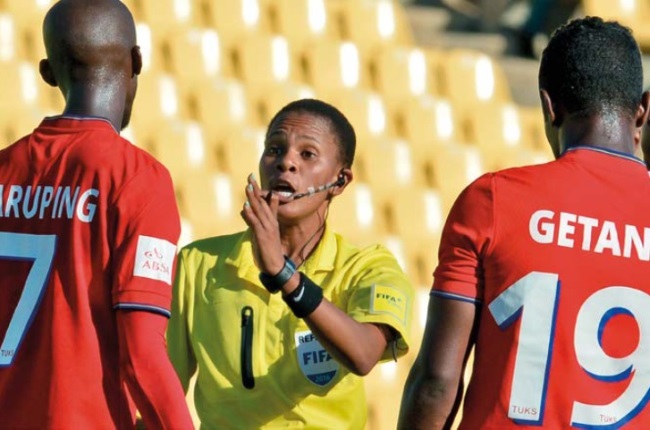 Akhona Makalima says that although a female referee is still looked down upon, she is determined to cement herself in the male dominated industry.
Sharon Seretlo

This story was published in 2017

It’s not easy being a woman in a man’s world. Just ask Akhona Makalima who has been sworn at, laughed at and insulted. Why? Because she’s the only female referee in the Absa Premiership, a world dominated by men. But this feisty 29-year-old isn’t easily intimidated – she’s made the grade and she’s here to stay.

Akhona, or Babes Wempempe (baby whistle) as she’s affectionately known, knew from the beginning her job wouldn’t be easy. “I told myself that I’m breaking into a world people think is for men and as a woman I had to prove myself. I also want people to realise this job is not about gender but the book. We study the same book and apply the same rules,” she says matter-of-factly.

On the pitch she’s all business – something she proved at the Premier’s Cup clash between Chippa United and Kaizer Chiefs at Sisa Dukashe Stadium near East London not long ago when she red-carded Sibusiso Khumalo for a professional foul.

“People don’t have faith in you [as a woman] at first,” she says. “Players will try to take advantage of you, throw all sorts of words in your face and managers and coaches will frown as soon as they see their game is refereed by a lady.”

Crowds also often don’t take kindly to her. “They’ll be like, ‘this is not netball – what do you know about football?’ They’ll dispute every decision you make and try to confuse you.” But she has words for them too: she’s here to stay.

“People need to change their mindsets and believe in women. As long as we know the laws of the game and are able to interpret them and apply them, we are on an equal footing.

“It takes courage to be a central referee and you need to have the courage of your conviction and stand by your decision.”

This gutsy sportswoman wears many hats and is also a model and an events manager. “I see myself as a brand ambassador empowering women in sport – that’s my five-year plan. I will work very hard and never bend or give up on anything.”

Sport has always been part of life for Akhona, who grew up shepherding sheep under the watchful eye of her grandfather, Robert Makalima, while her mom, Vuyokazi, and stepdad, Mbuyisa Dalasile, were away working.

Akhona, the second-born of five girls and a boy, matriculated from Msobomvu Secondary School in Butterworth in 2007 and played a variety of sports throughout her school career, including softball, volleyball, athletics and soccer. However, when she was in high school her mother became sceptical about her daughter’s passion for soccer. It was a boys’ sport, she told her – beautiful girls like her had no place on the pitch.

“But one day Akhona left me a note with few words, ‘Ukuyekiswa into uyithanda (being stopped from something you love)’ and I felt so bad. I decided not to let my fears blind my judgment, so I let it go,” Vuyokazi says. Akhona returned to the pitch while studying human resources management at King Hintsa FET College in Dutywa in the Eastern Cape.

She qualified for the FET provincial team and she was made assistant captain – but her career as a player didn’t last long. After completing her diploma she returned home and played for Ilitha FC – and this is where she came across a female referee for the first time, a talented ref by the name of Yonela Mahamba.

“She really inspired me,” she says. Bongani Mngese, the referees’ development officer in Chris Hani District, introduced Akhona to officiating games, and by August 2011 she blew the whistle for the first time. “It was for the Chris Hani memorial tournament in Eziphunzana in East London. I won my first trophy – as best referee of the tournament and it motivated me so much.”

She officially began reffing at the 2011/2012 SAB league in Lukhanji District. Later that year she completed more refereeing courses and was promoted to officiate the former Vodacom League, now the ABC Motsepe league, for the 2012/13 season. But she wasn’t promoted to the PSL panel as she’d hoped she would be.

“I was immature and inexperienced but my big heart kept me going. I had a strong belief that I was going to make it one day.”

One of the reasons she wasn’t admitted to the PSL was because she failed the men’s fitness test – in order to ref men’s games she needed to be as fit as her male peers. “I was very disappointed with myself,” she admits. “I just wanted to quit – I hate failing.” The next year she was back at it though – and passed the Fifa men’s international fitness test, the first South African woman to pass the test.

Read more | Soweto woman on having two partners and looking for a third – ‘If men can do it, so can I

“It wasn’t easy but it was worth all the pain and patience,” Akhona says. In May 2015 Akhona was tasked with her first international game, an Olympic qualifier between Zambia and Zimbabwe. “That was the biggest achievement of my lifetime – being a Fifa referee is everyone’s dream on the national panel.” She then tried again for the PSL and this time she was successful. Her first PSL match was on February 2015, when the University of Pretoria (Tuks) played Mpumalanga Black Aces at Tuks stadium.

Her mom piled on the pressure before the match, “If you fail you won’t be just a disgrace to the family but to the nation,” she told her. But she could happily report that her daughter was neither. Akhona was cool, calm and collected when players reacted angrily to some of her decisions and by the end of the game she had earned their respect.

On the homefront, Akhona is not interested in romantic relationships right now – sport and herself are all the company she needs. “I’m in a relationship with myself,” she jokes. “You need to be ready to invite someone into your space.”

Her mother chips in, saying she would not be happy if Akhona repeats her mistake and has a child before marriage. “I made a huge mistake and had a child at 17. I don’t want that for my children.” Akhona’s ambition is to be called to referee at the Fifa World Cup. “If that happens, I’ll be the first woman to officiate at that tournament. If I know the rules, I can apply them. Nothing will stop me. I will be working very hard to be the referee of the season one day.

“Anything is possible with God if we put Him first, work hard and never lose focus.”

We live in a world where facts and fiction get blurred
In times of uncertainty you need journalism you can trust. For only R75 per month, you have access to a world of in-depth analyses, investigative journalism, top opinions and a range of features. Journalism strengthens democracy. Invest in the future today.
Subscribe to News24
Next on Drum
64-year-old Limpopo mom gets first degree - 'The knowledge I got from studying will empower me forever'