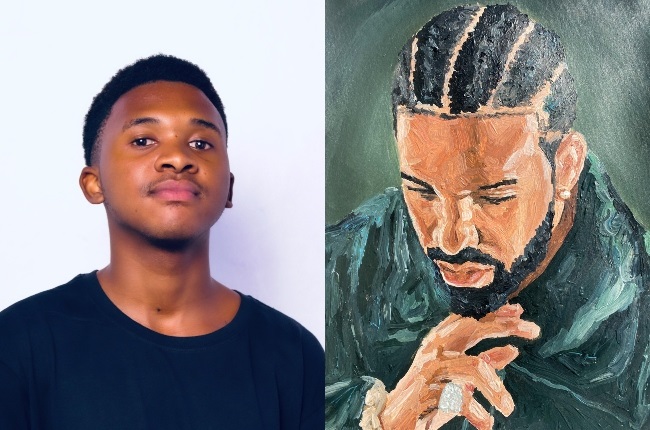 One day he woke up to a flood of notifications on his social media accounts.

When he checked, it was his friends telling him amazing news. Multi-award winning, multi-platinum Canadian rapper and international star Drake had not only given him a shout-out on his stories, he had also used the portrait he had created as a profile picture.

Fine artist and illustrator Siphesihle Ntsungwana (24) couldn't believe it. He wanted to pinch himself to make sure it really was happening.

This wasn't just any artist, but someone who's a role model to Siphesihle. “I was inspired by his latest album so I had time to listen to it when it came out then the next day I wanted to express my enjoyment of it through painting. I loved the fact that it was produced by one of our own, Black Coffee, even more,” Siphesihle tells us.

He didn't expect this at all, all he was doing was what he loves - painting.

“It was a surprise. I woke up on [the album] release and saw a notification from Apple music about the album. I’m a huge fan of Drake, that’s why I enjoyed the whole album even though others bashed it.” “So it inspired me to express myself as a big fan of him, the album made it so much easy for me to do some more work not necessarily of Drake but others while listening to the album.”

This is not the first time that Siphesihle who studied fine arts at Durban University of Technology, has won the hearts of the rich and famous through his work.

He says during his studies, “We had an exhibition in a gallery here in Durban and that was where many people started to notice my work this included the likes of Okmalumkoolkat, who also fell in love with my work.”

And for the cherry on top, Siphesihle received a call for an interview to be featured on the American online newspaper, TMZ and for him it feels like a dream come true.

“It was crazy and surprising moment for me, I did not anticipate receiving that call and being on their website and people showing love for my work on the comment section.

“I am happy to be one of the artists to be posted on Drake’s stories, as a big fan of him.”

He says he hopes to receive more recognition of his talent as time goes on so he can sell his work.

We live in a world where facts and fiction get blurred
In times of uncertainty you need journalism you can trust. For 14 free days, you can have access to a world of in-depth analyses, investigative journalism, top opinions and a range of features. Journalism strengthens democracy. Invest in the future today. Thereafter you will be billed R75 per month. You can cancel anytime and if you cancel within 14 days you won't be billed.
Subscribe to News24
Next on Drum
Kamo, Kagiso, and Coachella Randy get real with YouTube reality show, Birth of Stars