‘It’s an attraction to thugs, they’ll rob you’ – cop warns stokvel members ahead of festive season 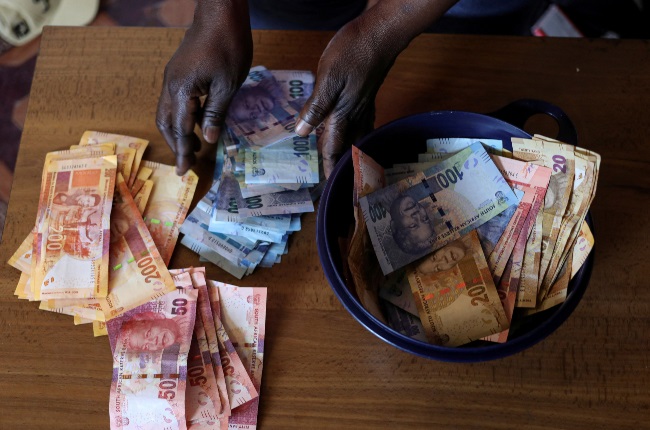 A stokvel cub member counts banknotes contributed during one of their gatherings in Vanderbijlpark, Johannesburg south. Cops are warning against distributing physical cash as criminals prepare to strike this festive season.
Reuters/Siphiwe Sibeko/Gallo

It’s that time of the year when there’s a little extra cash for nice things – smart clothes, a new lick of paint on the walls of your home, treats for the kids.

And it's about time too as you’ve been diligently saving your money for months to afford these things. Even during the most lean months the one thing you didn't compromise on was your stokvel.

And now that the festive season is here it’s time to reap what you’ve sowed and your stokvel is getting ready to withdraw the group’s money for distribution.

“The thugs, normally in the festive season, they try by all means to make as much as money as possible, so they will rob, they bill scam people,” police spokesperson Brigadier Selvy Mohlala told the SABC recently, commenting on a spate of recent attacks on women in the Pankop village of Mpumalanga by gun-toting criminals who forced victims to undress and took their money.

Another stokvel member was reportedly robbed of her group’s saving in the early hours of the morning last month in her home in Bekkersdal, Johannesburg south.

“The robbers allegedly entered the victim’s place at about 02:30 [on 23 October]. They were armed with sharp objects and demanded that she hand them the money. They also robbed the victim of two cellphones before they fled,” Bekkersdal Police spokesperson Sergeant Linkie Lefakane told The Randfontein Herald.

“As we approach the festive season most groups will be starting to share their year-end savings. We therefore appeal to the community to refrain from moving around with large sums of money. We advise people to do electronic transactions to avoid these incidents,” she cautioned.

Some stokvel members get excited and share the news that they’re expecting payouts on social media, which is something Lefakane says can make people fall victim to being followed and mugged.

KwaZulu-Natal’s Plessislaer police spokesperson Sergeant Sifiso Gwala has sounded the same warning, saying: “Another thing that leads to people being robbed is that when they are about to receive their stokvel money they go around telling everyone that they are about to get money and end up revealing details of when they are going to meet and divide the cash.”

How do you protect yourself?

This is the advice Cyprian Ntshingila, a police captain for the Rapid Rail Unit in the Western Cape & Northern Cape, gave Drum readers ahead of the start of the last festive season to protect yourself from targeted by criminals.

“Their way of operating is the same each time,” he said. “They either follow you out from the bank, or observe you from a distance at an ATM. This is why it's important to stay vigilant and also consider not carrying around large amounts of money or if possible, no money at all.”

The captain offers the following tips to stokvel members:

Choose a day that is either during the week or go very early in the morning. Try by all means to avoid the 'big' days in December where most people are bound to be in town. "When you're in a large crowd, distractions happen easily and it's hard to know where danger might be lurking," he said.

If possible, ask your bank if payments can be made directly to the members accounts. "This is how you minimise the risk of getting robbed or pickpocketed. When transactions are done electronically, there is little chance of people being robbed of their hard-earned savings or putting yourself in harms way."

In instances where you cannot avoid the bank, it's better to go in pairs. "Four eyes are better than one and you are less likely to be targeted if the criminals perceive the person you are with as a threat. "I've also seen that it's better to not announce your visits to the bank. The less people know, the better. You never know which ears are listening and you may be putting yourself at risk by letting a lot of people know about your plans for the day," he added.

"This year makes it even harder, people are wearing masks and are so mindful of trying to maybe not contract the virus that they might not even see what's happening in their surroundings."

Read more | He decided he'd buy a new property every single year, and now the investor is in the big leagues

The South African Banking Risk Information Centre (SABRIC), on behalf of the banking industry also issued out a warning to members of stokvel clubs to be extra cautious.

“It is very distressing that bank clients, who are the victims of stokvel robberies are often injured or even killed during these incidents,” said Kalyani Pillay, CEO of SABRIC.

According to incidents reported to SABRIC between 2014 and 15 December 2017, 53 stokvel robbery incidents were reported, with 77% of incidents occurring during the festive season. In 2019, these crimes decreased by 2% however criminals are still likely to target members as the festive season approaches.

"We urge them to find safer ways to transact, such as internet transfers or mobile banking, instead of carrying large amounts of cash and to always be vigilant about paying attention to their surroundings at this time," he said in a statement.

We live in a world where facts and fiction get blurred
In times of uncertainty you need journalism you can trust. For only R75 per month, you have access to a world of in-depth analyses, investigative journalism, top opinions and a range of features. Journalism strengthens democracy. Invest in the future today.
Subscribe to News24
Next on Drum
Hunting for a bargain? Here are 9 ways to make the most of this Black Friday