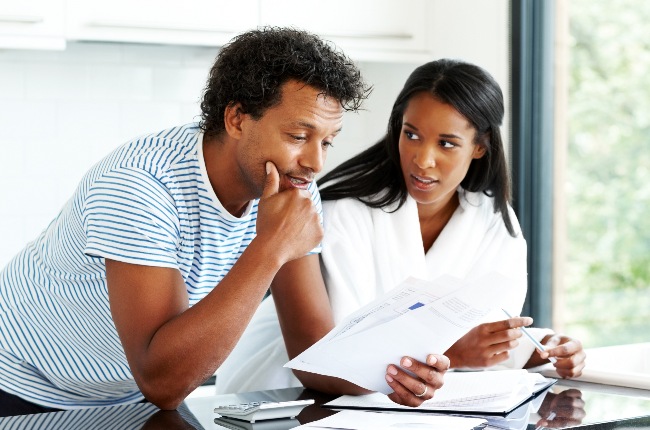 Are you and your spouse or partner constantly fighting over money – the way it’s spent or the lack of it? Then join the club. Experts say money is one of the main causes of friction in relationships. A survey by an American bank in 2015 revealed a large number of couples argued over money, hid transactions from each other or simply did not consult each other about large purchases.

Read more: Does lockdown have your partner feeling more like a sibling? 10 tips to reignite your fading romance

A random telephone survey by a US credit-card company found that one in five people admitted spending R5000 or more without their spouse or partner’s knowledge and 6 % of respondents had bank accounts they were hiding from their significant others.

Men and women often have different priorities when spending money. For her, that gorgeous pair of shoes she saw at a sale was a “must-have” item and having her hair or nails done is a weekly necessity. For him, paying for drinks with his buddies on a Friday night goes without question as something “he has to do”. At the same time, secret spending can result in major conflict once uncovered. Mandisa Sonani* was shocked to discover her husband Ronald* had blown R20 000 on gaming one month and would not be able to pay his share of their household accounts. “We had separate bank accounts when we got together and agreed to keep it that way when we got married,” she shares. “We had simply agreed on how to split our household responsibilities. I couldn’t believe it when I got a call from our landlord to tell me our rent was in arrears. We had an explosive fight and spent days not talking to each other.”

How it affects a relationship

Withholding details about your spending habits (and the results thereof) can become just as bad as a physical betrayal. It quickly becomes a habit and leads to a breakdown in trust. At worst, it can force your partner to become a “detective” searching through bank and credit card statements for evidence. When discoveries are made, it can lead to resentment and fights. Transparency is important in a relationship, says Thuli Bottoman, a senior counselling social worker at The Family Life Centre in Johannesburg. “If it leads to people becoming secretive and dishonest, they need to reassess the marriage or relationship, unpack where this is coming from and what led to this behaviour,” she says.

How to fix it

1.       Talk about it. Honesty is the key to any healthy relationship and also to building healthy finances, says Eunice Sibiya, head of consumer education at FNB. “This doesn’t mean you need to bring your payslip with you on the second date, but if you’re in a steady relationship or already married with kids, it’s wise to start open, non-judgemental conversations about where you’re both at in terms of finances,” she advises.

·       Discuss your attitudes towards money. The way you were raised, if you and your partner are in different income brackets or have different spending habits, financial responsibilities towards family or levels of debt will influence how you handle your money.

“Spending patterns of partners can be so different that one is heavy in debt and overspent while the other is working hard to save,” Eunice adds.

·       Discuss your goals and dreams. “As individuals, we encourage regular budgeting to make sure your money goes where you want it to. This goes for couples as well,” Eunice says. The discussion could include where to go on holiday at the end of the year, starting a family or retirement planning.

2.       Work out who will control the household finances. Not everyone is very careful with money and that needs to be acknowledged, Thuli says. “Some people are better than others at handling money therefore couples need to agree who’s going to be the treasurer right from the beginning,” she adds.

If separate bank accounts are kept, Thuli advises couples to agree on their different roles and responsibilities and how the running costs will be split between them. S

As a solution to money squabbles, couples can agree on a joint account for the running costs of the home and a personal account for each individual’s needs, says Thuli Bottoman, a senior counselling social worker at The Family Life Centre in Johannesburg.

“It works when both have budgeted for and agreed upon it. Money that goes into the joint account can be used to spend on household expenses and savings. If in the budget each couple has an agreed amount for their personal spending that would create a more harmonious financial relationship,” she adds.

The pros of a joint bank account include better control over your finances, saving on bank charges, being able to pay off a bond quicker and less room for secret spending. The cons include conflict over minor spending, emotional blackmail by refusing permission to withdraw funds during conflict and legal consequences come into play in dividing the money in the event of divorce, or a freezing of the account in the event of insolvency or the death of one partner.

If there are red flags, such as large amounts of debt or a bad credit record on either of you, the other partner might be tempted to say “it’s your problem”. “There might be consequences when you want to buy a house together or build a savings,” warns Eunice Sibiya, head of consumer education at FNB.

“It doesn’t mean you should start paying off your partner’s debt, but rather be supportive and negotiate the problem together.” The first step would be to find out why this has happened and to get to the bottom of it, advises Thuli Bottoman, a senior counselling social worker at The Family Life Centre in Johannesburg. “The person who messed up needs to own up and take responsibility for the debt. The couple can then discuss and work towards making decisions for their future finances.” Don’t wait for creditors to call or to default on payment. Contact your credit providers and work out a plan for repayment. You can also consider getting professional help to get back on track.