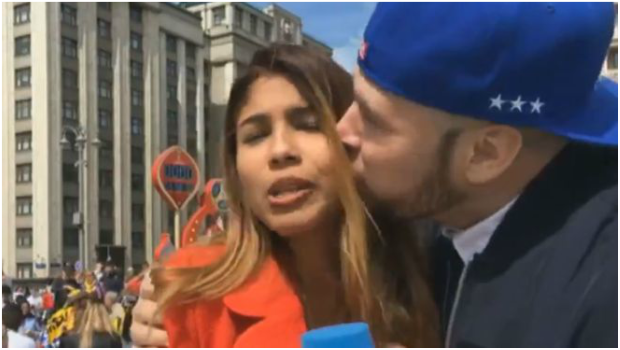 In light of the #MeToo movement it seems more women than ever are facing a barrage of sexism and abuse in the male-dominated field.

The first incident of on-air harassment happened to DW Correspondent Julieth Gonzalez Theran, who, while reporting live from Moscow, was harassed by a man who grabbed her breast and kissed her on the cheek.

A DW reporter was sexually harassed while covering the #WorldCup. @JULIETHCGT was kissed, groped by a man while reporting from Moscow.

Sexual harassment is not okay. It needs to stop. In football, and elsewhere.pic.twitter.com/O0S1a1F4Es

After the incident, the man disappeared into the crowd but after being identified by social media users, he came out and apologised for his actions.

Speaking on the harassment she suffered, Julieth blamed the masculine nature of football for what happened to her, “lots of people think that the reporter is only there to bring some colour to the picture but we want to talk about systems and strategy.”

Russian journalist Barbara Gerneza also endured her own harassment while working for news service IG. While interviewing Brazilians fans, who were aware she didn't speak Portuguese, they got her to join in an offensive chant which included singing about a “Russian pink vagina.”

Following the incident, Russian women's rights activist Alyona Popova sent a petition to the Brazil’s interior ministry and their embassy in Russia, demanding an apology and punishment for the chanting Brazilian fans.

Brazilian reporter Julia Guimaraes is the latest victim of harassment after a man tried to kiss her while she was doing a live report during Sunday’s match between Japan and Senegal.

Julia responded to the violation by dodging the kiss, and telling him never to behave in that manner towards a woman.

In the video, Julia can be heard saying, "don't do this! Never do this again” to the man, who can be heard apologising.

"Don't do this, I don't allow you to do this, never, OK?” she repeats. “This is not polite, this is not right. Never do this to a woman, OK? Respect."

She tweeted afterwards that will she never experienced harassment when covering the 2014 World Cup in Brazil, it has happened to her twice during her stay in Russia.

It’s not only football fans that are making females coverage of the World Cup a difficult process but professional footballers have been criticised for their behaviour towards more female representation in the sport.

Former England defender and captain, John Terry was forced to clarify his Instagram post after he posted a pic saying he was watching the game between Portugal and Morocco on mute because it featured commentary from Vicki Sparks.

While former France international Patrice Evra was branded as ‘patronising’ and ‘misogynistic’ after applauding former England player Eni Aluko's football knowledge during TV coverage of the game between England and Costa Rica.