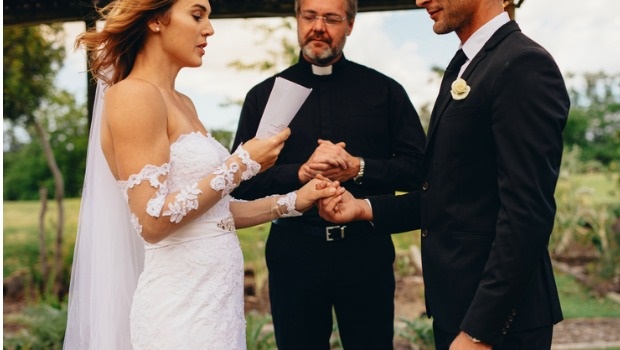 A bride exchanges vows with the groom

According to The Mirror , a woman who uses the pseudonym Casey documented her experience of discovering her husband-to-be was being unfaithful on the eve of their wedding.

In the tell all piece that first appeared on Whimm, Casey revealed how she got an anonymous text message that had screenshots with proof of her fiancé cheating which was accompanied by the message “I wouldn't marry him. Will you?".

“The screenshots were of conversations between my husband-to-be and another woman. Loads of them, including selfies of the pair. She was the opposite of me. I’m blonde and fair, and this unknown woman had dark hair and olive skin,” she explained.

“The texts were dated from months to only days before. My brain simply could not compute WTF was going on. There was no questioning the legitimacy of these messages. I just knew.”

While receiving the heart-breaking truth brought her to tears in what she refers to as a “glitzy hotel room” while drinking champane with her bridesmaids, Casey revealed that she refused to call the wedding off like her friends suggested.

Instead, she thought of the perfect plan to get back at her cheating man.

“I didn’t sleep a wink and when dawn finally broke I awoke the girls and told them my decision –  I was going to go ahead with the wedding as expected, and ‘out’ him in front of our friends and family.”

“I walked down the aisle with leaden feet, my dream dress now just a costume. As he saw my face he knew this was not an ecstatic woman on her big day, but he had no idea what was coming. I arrived at the front of the room, took a big breath and I faced our friends, our parents and I told them the truth about Alex*.”

Casey then proceeded to read the explicit texts that Alex had been sending to another woman. These texts included heartbreaking phrases such as “This weekend. You and I. It is on, hot stuff. Bring your A game,” and “Your body is f*cking incredible…I wish my girlfriend had half the skills you do.”

The bride also claimed that afterwards, the groom was ashamed and had no choice but to leave the venue and was followed by his best man while Casey stayed behind and had “one hell of a party”.

We live in a world where facts and fiction get blurred
In times of uncertainty you need journalism you can trust. For only R75 per month, you have access to a world of in-depth analyses, investigative journalism, top opinions and a range of features. Journalism strengthens democracy. Invest in the future today.
Subscribe to News24
Related Links
Lerato Sengadi and Amor Vittone expose the gloomy position of the estranged wife
This bride is being called out for making her bridesmaids buy hideous dresses, but there’s a plot...
Dad throws wedding party for 24th child with over 3000 guests present
Next on Drum
Security guard accused of stealing R4 million appears in court – ‘She’s a simple person’