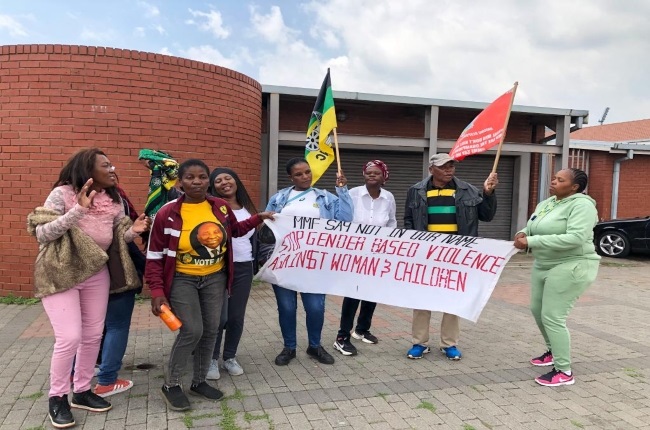 The women from the ANC Women’s league, Etwatwa branch came out in numbers in support of the Constable who allegedly killed his wife.
Snazo Notho

She was seven-months pregnant – full of the anticipation and joy of being a new mom.

But, just as the final trimester of her pregnancy begun, her life was taken.

She died a gory death, at the hands, the state contends, of her own husband – a cop.

Now the murder accused's hopes of getting out of jail are dashed after Magistrate Vinny Gobind ruled at the Daveyton District Court that he must remain in custody while his co-accused was granted bail for the alleged murder of his pregnant wife.

Despite Veli Masuku's lack of substantial assets and his submissions that he is not a flight risk, his bail application was denied.

The case was transferred to Benoni Magistrate's Court after Masuku's bail application, the former police officer and husband of the late Constable Prudence Masuku, was rejected.

In his first appearance in Benoni on Wednesday, the state requested a postponement for purposes of the Director of Public Prosecution's (DPP) instruction as well as further investigations.

The 34-year-old husband is accused of killing Prudence, a Daveyton SAPS employee.

She was seven months pregnant when she passed away. His co-accused was allowed bail when the two showed up in court last week Wednesday. Both are accused of murder as well as of conspiring to commit murder.

On June 23, the late constable was killed by a gunshot in Putfontein while she was on her way to work with her husband. On Durant Road in Mkgoba Village, men in two taxis allegedly confronted the couple, according to a police report.

It is alleged that passengers from both taxis approached the couple, opened fire on the police officer, and her husband fled for cover.

He allegedly noticed that his wife's service firearm was missing when he returned to their vehicle and reported the incident to the police. On the same day, the husband was taken into custody in connection with the murder.

Members of the Hawks Serious Organised Crime Investigation Unit, Ekurhuleni Crime Intelligence, and Johannesburg Metro Police quickly responded to information about a suspect demanding cash from a "middleman" for the murder of the police officer. This led to the arrest of his co-accused.

The members of the ANC Women’s league, Etwatwa branch came out in numbers in support of the Constable who allegedly killed his wife.

Last Wednesday in court, it was revealed that Ezekial Moalusi, an investigating officer for the Hawks Serious Organised Crime Investigation Unit in Germiston, was murdered last week.

He had worked in the SAPS for forty years. Moalusi's death was confirmed by Hawks spokesperson Captain Lloyd Ramovha, who added that it has not been established whether Moalusi's murder is connected to the Masuku case.

In previous court appearances, Moalusi testified in court that the suspect shot his wife because he was physically abusive to her and had an extramarital relationship with a colleague of hers. Additionally, he stated that the accused's girlfriend stated that the couple was not on good terms.

Moalusi allegedly previously testified in court that he found the deceased lying next to a maroon Renault Sandero with seven 9mm cartridges next to her body when he arrived at the scene around 08:10.

Moalusi claimed that the husband's statement was inconsistent and did not correspond with the scene of the crime.

On July 7, Moalusi arrested the second suspect, a 30-year-old man, in Melville. He was taken to the Putfontein SAPS, where he was found with a picture of Masuku's state firearm on his phone

He is said to have taken the police to the address in Johannesburg where the gun was, but when they searched the shack, which belonged to another man, they didn't find the gun. The second accused person then allegedly called the shack's owner, who said where the firearm would be found by police.

It was allegedly discovered wrapped in a black plastic bag inside a trash can without a serial number.

Moalusi testified in court that the firearm they found was comparable to the states and that it was sent for ballistics analysis.

The defence attorney for the second suspect Advocate Suleiman Ebrahim argued that there was no evidence that his client was involved in the murder, conspiracy, or possession of the firearm, and he also denied reports that his client had tried to flee to Swaziland.

In addition, he argued that the firearm picture was sent to him via Whatsapp.

Magistrate Gobind emphasized that the two accused face serious charges and that the husband could face a life sentence if convicted.

The case is postponed to 31 January 2023 for further investigation.