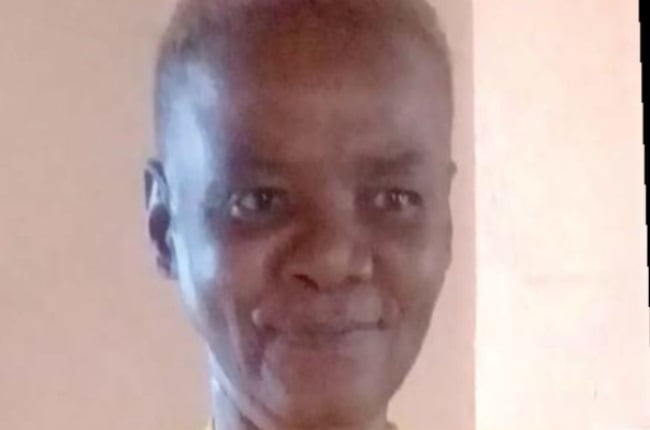 Wanter Dlamini was allegedly killed by her two elder daughters in order to cash out on a insurance policy.

When she was called to identify her mother ’s body at the morgue, she thought that was the worst thing she’d ever go through. Nothing could be more terrible than knowing her mom was gang-raped and strangled to death.

But then came the shocking news: two of her sisters were arrested in connection with their mother’s horrific death, and Bessie van der Merwe battled to believe her own flesh and blood could be involved. Now Bessie (30) is left to pick up the pieces. Her mom, Wanter Dlamini, was found on 6 January by passers-by on the side of the road near Barberton Abattoir.

The pensioner had been raped and strangled and her eldest daughters, Mapum and Nonhlanhla Mthunywa, have been arrested and charged with murder. Bessie tells DRUM she’s not surprised Nonhlanhla was allegedly involved.

“She has a terrible heart,” she says. “I never expected anything like this from Mapum but this is the type of person Nonhlanhla is. She has spent time with gangsters and her boyfriend smokes nyaope.” Bessie says Wanter disowned both Mapum and Nonhlanhla some time ago.

“I previously asked my mother why she disowned them, but she refused to tell me. She said if she told me her reasons then I too would want nothing to do with them. She took that secret to the grave with her.”

The family had looked up to Wanter and she was the last of the remaining elders of the family, says Bessie, one of four siblings. “My mother was my everything.”

She recalls the day she had to identify Wanter’s body “It was hard. When I saw her just lying there, her head was swollen and purple.

“Her face had bruises and there were marks on her neck as well.

“It seemed her neck was loose as though the bones in her throat were broken,” she says with a catch in her voice.

“My mother was in her early sixties but she was healthy and strong. She could have easily lived to her nineties and she was taken away from us, just like that.”

Her mom had been hoping to reconcile with one of her daughters in the days leading up to her death, Bessie reveals. Mapum (39) works for the sugar mines in Barberton, while Nonhlanhla (34) is unemployed.

“To our surprise, at the beginning of the year Nonhlanhla contacted Mama and wanted to meet with her. She said she wanted to reconcile with her so that we could all be a family again.

“My mother was very excited, and she even phoned me to tell me that Nonhlanhla was visiting her at home and that I too should come over so we could spend time together,” Bessie adds. Her mom was happy about the reconciliation.

“We all thought she was being sincere.”

Once her daughter had left, Wanter apparently realised her cellphone was missing. The pensioner left her home to go confront Nonhlanhla about the missing cellphone, never to be seen alive again.

“It was getting late on Sunday and no one had heard from Mama and that was unlike her to just disappear like that,” Bessie says.

“I went looking for her at Nonhlanhla’s home and she looked me in the eye, saying she had not seen our mother.

“On Monday morning I was stuck and couldn’t go to work because my mother looked after my seven-month-old son.”

Then they got a shocking call. “My brother, Mark, and I were contacted by the police and they were asking us about our mother’s whereabouts,” Bessie recalls.

“I knew then that something was wrong. I just hoped she was knocked over by a car or something. But the reality was far worse.”

According to police reports, Nonhlanhla allegedly arranged for a 41-year-old friend and two other male friends to wait for her mother to arrive.

“When [Wanter] eventually arrived at Nonhlanhla’s place, she was allegedly kidnapped, assaulted, senselessly gang-raped by the two male friends while Nonhlanhla and her friend were holding her,” the police said in a statement.

“When these suspects were done with their barbaric deeds, they later allegedly strangled Wanter to death, wrapped her body with a blanket and then hid it in an outside toilet.

“Later [Mapum] was restless to a point where she allegedly organised transport which helped to remove Dlamini’s body and dumped it in a nearby veld.”

Money was the root cause of the alleged murder, it has since emerged. Brigadier Leonard Hlathi of the South African Police Service says in November last year an insurance policy was taken out in Wanter’s name and that the policy would pay out double the insured amount of R40 000 in the event of her unnatural death. It’s alleged Mapum had a friend take out the policy in Wanter’s name. “I [also] had a policy for my mother, but it was just funeral cover,” Bessie says.

“I’m not shocked that my sister went as far as getting her friend to get a policy in our mother’s name.

“Some policies don’t have a waiting period for unnatural deaths. So, if they opened the policy in November, then they only paid the December instalment and they allegedly killed her in January to get the lump sum.”

She couldn’t believe Mapum was involved, Bessie says. “As much as Mapum never had a relationship with our mother this isn’t something any of us thought she could do. She has shocked all of us.”

Nonhlanhla was arrested on 29 January and charged with murder and has appeared in the magistrate’s court in Barberton.

She was remanded in custody until 5 February. Mapum was arrested too and appeared in the same court. The police have launched a manhunt for the remaining suspects and have called on those who know them to work with the police to bring them to book. The provincial commissioner of police in Mpumalanga, Lieutenant General Mondli Zuma, has strongly condemned the murder and welcomed the arrests.

“It is very shameful to witness the murders of people allegedly killed or kidnapped by their own family members who are driven by greed and the love of money,” he says.

Bessie is battling to accept that she’ll never see her mom again. “We want to know how they could do this. But the truth is, even when the whole truth has been uncovered, nothing will bring Mama back. “She is gone forever.”

We live in a world where facts and fiction get blurred
In times of uncertainty you need journalism you can trust. For only R75 per month, you have access to a world of in-depth analyses, investigative journalism, top opinions and a range of features. Journalism strengthens democracy. Invest in the future today.
Subscribe to News24
Next on Drum
Family shares their pain after losing a loved one during the Phoenix murders – ‘He would not hurt a fly’