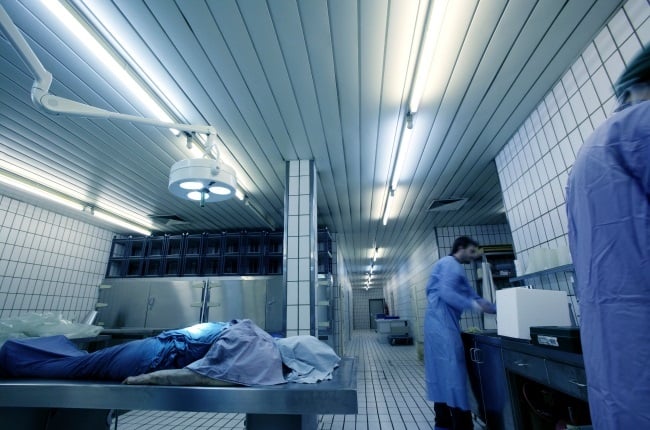 The funeral parlour industry is terribly affecting by loadshedding.
THE SCIENCE PHOTO LIBRARY

It has been four hours of loadshedding, probably for the second time that day.

One of the cars stuck in bumper-to-bumper traffic is a mortuary vehicle with corpses inside, moving them to their nearest affiliate parlour so they can maintain the necessary cold temperatures under 5°C.

As the country grapples with switching between stage 5 and stage 6 loadshedding, many businesses are affected by the power outages. But funeral parlours, whose core business is to preserve and keep corpses in pristine condition until burial, are struggling with the blackouts.

Morongwa Molefe, the secretary general of the Funeral Industry Practitioners, says some funeral parlours have generators and others don’t.

“It depends on how big the parlour is, some of them are just starting out and have not generated enough income yet to be able to make such purchases,” she explains.

“Generally, our fridges can keep the temperature cold between 6-7 hours. But the on and off every four hours or so is damaging them.

“Our business is so badly affected that those smaller parlours who do not have generators have to ask others if they have power or generators and often have to drive across town to make sure the bodies are kept cold. Because sometimes the power will go off from the early hours of the morning, to be back at 9am then at 10am or 11am its off again for another four hours.”

Morongwa says they cannot risk and leave the corpses in the fridges and hope that the power will come back when the schedule says it will be back because sometimes municipalities always switch the power off for repairs, in addition to the Eskom loadshedding.

“The reality is that even though customers know the country is experiencing loadshedding, they are not going to understand if we give them decomposing bodies that smell or have maggots and blame that on loadshedding. That means we have to come up with whatever alternatives in order to make sure the bodies are kept in the right conditions. This is really affecting our business badly, we are truly heading for disaster if we continue on this path.”

Morongwa says things are so bad that they have had to resort to embalming that bodies at a cost of more than R700 per body.

“We usually have bodies embalmed if they have to travel long distances to our neighbouring countries and we charge that to the customer and they understand. Now we have to embalm even the local corpses because it helps to maintain the cold. But we cannot charge that to the customer. This loadshedding is draining us financially because it is the parlour’s duty to keep the bodies in good condition and we need to do whatever it takes in order to do that,” she adds.

She says the heat from the weather getting warmer is further adding a strain, but if their fridges were not being shut off, the weather would not be a problem.

“Some parts of the country have extremely hot weather conditions which fast tracks the decomposition time, but our government is not doing anything about it.”

Echoing Morongwa's frustration is Vuyo Mabindisa, the secretary general of the South African Funeral Practitioners Association. He says the costs unfortunately have to trickle down to the customers because they need to use generators which run on fuel and with the high fuel costs, some parlours are not even breaking even at the end of each month.

“We are incurring costs we did not anticipate. Fuel for the generators is very expensive.”

Vuyo says they even have to buy still water in order to wash the corpses.

“We have water reservoirs that need 23 hours of uninterrupted power at a time in order to give us the water that we need. But because the loadshedding comes multiple times a day, the reservoirs cannot pump the water. And again, that will also make its way down to the customers, it really is a ripple effect. We need to wash bodies when they arrive from the hospitals and some of them are very bloody and we have to wash them before handing them over to the families, so we really use a lot of water.”

He adds that because the loadshedding also affects the phone networks, customers struggle to get through to them when loved ones die at home and they have to wait until power is restored.

“Even if they miraculously do manage to get to us, our parlours use navigation system to get around and they do not work properly because of the loadshedding. Then when they get to the area, it is hard to locate the houses when they call because the networks is interrupted. Giving our customers added trauma to their grief because we are not getting to them quickly enough to remove the bodies from their homes.”

According to Vuyo, home affairs offices do not have back up generators either and so when there are power outages, they cannot make and release death certificates, delaying the releasing of bodies from the parlours even further.

Then there is the issue of payment at the parlour.

“We are a cashless service because of the amounts of money that are involved. When there is loadshedding, customers cannot pay. And the reality is that no one is walking around with thousands of rands to pay for coffins or tombstones.”

He says because not all parlours have back up generators, they have had to hire temp drivers to move the tagged bodies from one parlour to the next to keep them cold.

Read more | With the country back in stage 4 loadshedding, here’s how to protect your appliances

“We call them body watchers. The bodies are tagged with their names and parlours, then driven around to the closest affiliate parlour that has electricity or a generator. This goes back to the costs we have now incurred. In each region we have people that are watching the loadshedding schedule closely and communicating about the moving of bodies. Though human error is a possibility and nothing is impossible, we do our best to ensure that bodies are not mixed up. The error margin is very slim,” he adds.

Julie Mbuthuma, president of the National Funeral Practitioners Association of South Africa, says they do their best but they are even losing money as they have leave the generators running for at least an hour after power comes back on.

“We do this so that there is no interruption and the fridges are kept cold, below 5°C. But then the power goes back off within the next hour so our generators are almost running 24/7."

To further exacerbate the problem are forensic pathology workers in the Eastern Cape on a strike resulting in a pile up of bodies. A staff member who spoke anonymously tells Drum that they have had to move bodies from the state parlours, but because of loadshedding, some of them are returning to the state “partially decomposed, with purges of fluid and some with skin discoloration.”

“The workers are on strike because of a labour dispute with the department of health.”

The department of health in the Eastern Cape has given its employees an ultimate to return to work as their offer essential services.